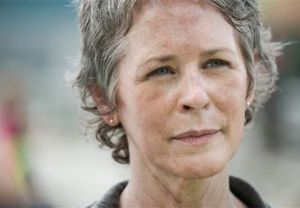 There were nearly as many smoke/fire/burning metaphors in this week’s (almost) all Daryl and Carol episode of The Walking Dead as there are matches in a matchbook. But, as the dynamic duo searched for Beth, were either of them, as the title suggests, “Consumed” by the flames? Read on and find out!

IN HOT PURSUIT | At the top of the hour, we flashed back to the day that Rick banished Carol, and saw her follow a trail of smoke (just the first of ’em) to the prison following the Governor’s disastrous siege. In present day, as Carol and Daryl shadowed what we knew (but they didn’t know) to be a Grady Memorial vehicle, he filled her in on how resilient Beth became. Since they were running low on gas and Rick would worry about why they vanished, Carol wanted to cut to the chase of the chase and run the suspects off the road. Daryl argued that, with the element of surprise on their side, it would be smarter to keep following them and see who they were first. (Who they were, of course, were a couple of Dawn’s guards.)

Taking refuge for the night in a shelter for abused children, Daryl and Carol had the first of a few thoughtful, thought-provoking conversations. In this one, she reminded him that he said they could start over and asked if he had. “I’m trying,” he replied. She was still so shattered, though, by everything that she had been through that she sadly suggested, “I don’t think we get to save people anymore.” Then, why was she there with Daryl on a mission to rescue Beth? “I’m trying,” she said. Before they finally passed out, they discovered a roomful of walkers — horribly, the abused children who had been being protected at the facility. Carol moved to put them down, but Daryl, bless his heart, stopped her, insisting, “You don’t have to.”

FIRED UP | The following day, Carol woke to find Daryl outside burning the bodies of the young walkers that he’d saved her from having to dispatch. (Cue the flashback to Lizzie and Mika’s burial, smoke in the distance, in 3, 2… ) “Thank you,” she said quietly. That unpleasant task out of the way, the twosome resumed their pursuit of Beth, hoofing it into the streets of Atlanta and ultimately onto an enclosed skybridge full of walkers trapped in tents and sleeping bags. Since they were unaware that they were being followed, there was even a (fleeting) moment of levity as they squeezed through a chained doorway: “Good thing we skipped breakfast,” Daryl cracked.

While scanning the horizon for clues from the vantage point of a fancypants high-rise office, Carol noted that Daryl still hadn’t made her tell him what happened with Lizzie and Mika. “I know what happened,” he responded. “They ain’t here.” But, as we know (but he couldn’t), it wasn’t walkers that did the girls in. “It was worse than that,” said Carol. And it seemed like that was enough said, for the moment, anyway. Trying again to reassure his gal pal, Daryl explained, “The reason I said we get to start over is ’cause we gotta, the way it was.” And since she answered “Yeah,” presumably he got through to her, at least a little bit.

BURN NOTICE | Spotting a Grady van (that they still didn’t know was a Grady van) perched precariously a quarter of the way off a nearby bridge, Daryl and Carol were headed out through the skybridge to investigate when — surprise! — Noah got the drop on them and demanded Daryl’s crossbow. But, still being the sweet fellow that we met a coupla weeks ago, he did offer up a “Sorry about this” before slashing open a tent full of walkers so that he could make his escape.

As Noah fled, Carol took aim at his leg, but Daryl — perhaps thinking the we-don’t-get-to-save-anyone Carol was going to kill the boy — intervened. Giving chase, she made it clear to Daryl that no, she wasn’t going to murder Noah. (Well, unless he died of a leg wound… ) Along the way, she also discovered that Daryl had taken from the shelter the textbook about treating survivors of child abuse. (Nice that he might be looking to work on himself a bit.)

HOT SPOT | Following a flashback to Carol burning the bodies of Karen and what’s-his-name, we joined our heroine and Daryl at that precariously perched van. It yielded good intel — at last they figured out that the cross vehicles came from Grady Memorial — but no weapon as cool as a crossbow. (In fact, no weapons at all.) Worse, the endeavor got them so cornered by walkers that they had no choice but to let the zombies push the van — with them buckled in it! — over the edge of the bridge! “We made good time down,” Carol joked once they were safe.

Then, during a heart-to-heart back at the highrise, Carol suggested that she and Daryl had both changed. “It’s like you were a kid” before, she said. “Now you’re a man.” And her? Admitting that she and Sophia once stayed (briefly) at the shelter, she remembered how, when she was being beaten by Ed, she would hope for something to happen, but she never did anything to make it happen. In the prison, that old version of her was burned away and replaced by the woman she always thought she should be… and then that version of her was burned away, too. “Everything now,” she concluded, “just consumes you.” Except for one thing, Daryl noted: “We ain’t ashes.”

WARMING TREND | Hearing a noise, Daryl and Carol discovered a walker with one of Daryl’s arrows through its neck. Gunfire next led them to discover Noah, who Daryl managed to get pinned beneath a book case. The young man pleaded for an assist — there was a walker on the other side of the door — but Daryl scoffed. “I already helped you once,” he said. “Ain’t happenin’ again.” Carol was like, “C’mon, we gotta.” But Daryl just walked away… only to relent a second later, shoot the walker in the head with his reclaimed crossbow and free Noah.

Finally — following one last flashback, to Carol wiping off walker guts after sending Terminus up in smoke — Noah warned her and Daryl that they had to go, because his gunshots were sure to have attracted the attention of the people from the hospital. Wait, said Daryl (more or less). Do you know Beth, then? Quickly, Noah explained that not only did he know her, she helped him escape. Unfortunately, as the three of them were about to make a run for it, Carol was hit by a Grady station wagon. (Seriously, what are the odds?!? At least now we know she wasn’t faking her injuries when she was wheeled into Grady in “Slabtown.”) Daryl naturally wanted to race out and save Carol from the guards, but Noah pointed out that it was better to let her go to the hospital, where they could fix her up, and then they could break in and bust out her and Beth as well. And, from the look on Daryl’s face as the episode ended, that was clearly exactly what he intended for them to do. (Loved Noah’s expression, too, like, “Who is this badass?”)

OK, your turn. What did you think of the episode? Were you satisfied with the mix of character development and action, or would you have preferred more of one or the other? Hit the comments!