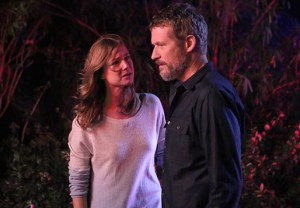 While Victoria “Sleeping Beauty” Grayson rested sweetly in her hospital bed on Sunday’s Revenge, Emily and Papa Clarke played a riveting game of Two Truths and a Lie.

Truth No. 1: David will always love Emily! Despite the fact that he “didn’t ask” her to seek revenge and clear his name, David assured Emily — actually, make that Amanda — that she’ll always be his daughter. Granted, he was in a pretty thankful mood after she saved him from a pair of thugs who tried to kidnap him from the hospital. (Speaking of which, did I miss him asking what Emily was doing under Victoria’s bed in the first place? That was crazy.)

Truth No. 2: It was, allegedly, a powerful rival of Conrad’s who faked David’s death and held him captive all those years. He also had his men take those photos of Amanda, promising to kill her if David didn’t follow his every command. David didn’t give Emily the man’s name, but methinks that TVLine’s latest casting scoop might be able to shed some light on the situation.

And now for the lie: Emily promised her father she wouldn’t pry into those missing years, but seriously, when’s the last time Emily told the truth? Like, about anything? In the episode’s final moments, we were introduced to a kinky torture chamber where Em already has a person of interest in custody — and a flaming hot fire poker with his name on it.

DEMILY 2.0? | Am I crazy, or is the (admittedly deceitful) spark between Emily and Daniel beginning to heat up again? This is the second week in a row they’ve engaged in close-quarter chit-chat, rather than completely avoiding each other. I can’t seriously be the only one who expects to see those two back in bed together this season, right? 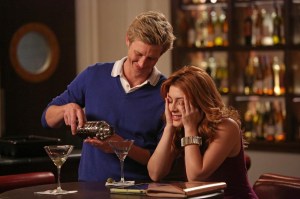 PHOTOSHOP FAIL | Louise was once again visited by the ghost of her mother — think Blanche Devereaux on crack — who had a very specific mission for her nutty little girl: Get that Grayson baby in your uterus ASAP! And get it she tried, tricking Daniel into a steamy shower in his hotel room, though it didn’t take long for him to call her a “lunatic” and expel her from his man-cave.

The Southern-fried psycho drowned her sorrows at Nolan’s “new” bar, where she found herself bonding with him — but once again, it didn’t take long for him to see through her charade. More specifically, Nolan got a hold of her tablet, where she stored her (hysterical) collection of Photoshopped Victoria pictures. This was all the encouragement Nolan needed to help Margaux look into Louise’s sealed criminal record, in exchange for some good PR, of course.

BEN OUT OF SHAPE | The FBI has officially taken over the Conrad Grayson murder investigation, and when the agent in charge (True Blood‘s Courtney Ford) was given one local cop to assist her, she went straight to Jack. Ben was predictably butthurt about the whole thing, but let’s look at the silver lining here: Maybe Ben will finally take a hint and begin to pursue a more realistic career… like working at Chippendales.

All right, Revenge-rs, do you think David is telling the truth about Conrad’s “rival”? Which Hamptonite will end up in Daniel’s bed next? And would you buy a coffee table book full of Louise’s freaky Photoshops? (Because I totally would.) Drop a comment with your thoughts below.