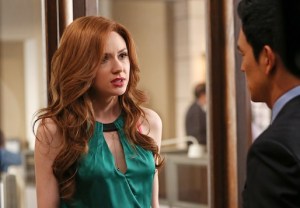 THE EPISODE | “Here’s This Guy”

THE PERFORMANCE | ABC’s recent decision to cancel its freshman sitcom Selfie is, on many levels, as cruel and capricious as a hunter taking a shot at a baby bird making its maiden flight from the nest.

Ratings (and dubious title) aside, the cute-but-uneven rom-com that premiered in September has seen its heart triple, perhaps even quadruple, in size over the course of seven episodes — in no small part due to the goofy commitment and undeniable charm of leading lady Karen Gillan.

Last Tuesday’s episode found Gillan’s Eliza experiencing unexpected pangs of jealousy as her mentor (and sole non-digital friend) Henry embarked on a romantic relationship with another woman. Right from the opening scene, in which Henry came to install a rotary phone in Eliza’s apartment, Gillan’s guileless smile allowed the audience to see how a woman-child obsessed with Facebook and Twitter “likes” was beginning to realize the power of liking a human being right in front of her. “Henry and I spend a lot of time together — and we never have sex,” Gillan marveled in a heartstrings-tugging voice-over. “We are, in the truest sense of the word, friends.”

When Eliza arrived at Henry’s office the next day, however, and found herself denied entry by his assistant, Gillan hilariously brought to life her flighty character’s all-too-human insecurities — and overactive imagination – by demanding to know with whom Henry was meeting. “Is it Obama? Is it Toby Maguire? Is it Toby Maguire, you little bitch!?”

Turns out, though, Henry’s lunch date with new crush Julia left no room for a plus-one, giving Gillan the chance to show us how much was at stake for Eliza now that she’d begun to really value her mentor’s friendship — and right when she needed help preparing to introduce her pharmaceutical company’s keynote speaker at a conference. After attempting to poison Henry’s romance — “Baby urine, isn’t that your new lady’s fave?” Eliza inquired about the pediatric urologist in a line reading that was far funnier than it had a right to be — she began posting negative online reviews of the saintly doc, leading to an ugly argument with Henry that left Eliza crushed (and viewers reaching for the nearest box of Lleenex).

The episode hit its crescendo with Eliza at the podium for her big assignment, exhibiting a mixture of her typical self-absorption and a crippling self-doubt over Henry’s failure to show up. “Thank you. And now, this guy,” she muttered, scoring a Standing O more for her sexy outfit than for the six words she’d managed to spit out. Lo and behold, though, Henry did manage to show up and show his support, moving Eliza to tears once again — only this time out of happiness. With Selfie about to go on the shelf, we may never get a romantic resolution for the couple, but maybe that’s not such a tragedy. In Gillan’s hands, Eliza has replaced emojis with emotions, and allowed her vulnerabilities to bubble up through her hard digital exterior. And to us, anyway, that sounds like a very happy ending.

HONORABLE MENTION | Liza Weil‘s Bonnie Winterbottom is, to a large degree, How to Get Away With Murder‘s least sympathetic character. She’s always skulking around in dark corners and empty hallways, tossing judgmental barbs at her firm’s law-student minions and making moony eyes at her boss Annalise’s hubby Sam. In “He Has a Wife,” however, Bonnie — having learned Sam was not traveling for work the night his pregnant sorority girl lover was murdered — confessed her lies of omission and fractured loyalty to Annalise in a desperate display that bordered on supplication. Weil’s broken physicality — on her knees at the feet of her queen — and tear-streaked face conveyed how much was at stake for the icy blonde as she begged for forgiveness and begged to keep her place at Annalise’s right hand. Alas, Bonnie’s pleas were in vain, and as Annalise gave her her pink slip with the brutal instruction to “leave and don’t come back,” Weil’s face made it clear Bonnie’s come completely undone.

HONORABLE MENTION | Once you bought into the premise of Castle’s reality-warping episode, the payoff was the glory of Nathan Fillion as a humorously hapless fish-out-of-water desperate to — again! — prove his value to the crimesolvers at the 12th precinct. Fillion-as-rascal never does not entertain, as Rick skulked around corners and wormed his way into interrogation rooms, or endeavored to “explain” his delusion to Captain Beckett, saying of his new novel’s main character, “I’ve fallen in love with her. I eat with her, sleep with her” (all the while alluding to the “real” deal back home). Then, once the alt-reality ended, Fillion melted Caskett-loving hearts with his twinkly eyed delivery of Rick’s heartfelt wedding vows. How could one not say, “I do” to this endearing performance?

HONORABLE MENTION | All too often during Sons of Anarchy‘s final season, we’ve wept over the death and destruction set in motion by Gemma’s killer white lie. So, when the emotional peak of Tuesday’s episode came not in the form of another lost life, but Venus and Tig’s candid confessions of love, we found ourselves getting choked up for a far different reason. In a rare and spectacular moment of vulnerability, Venus — as played by the fearless, incomparable Walton Goggins — stripped away her signature makeup, styled hair and lilting voice to expose the conflicted man underneath it all. And when Venus finally admitted her true feelings for Tig (“I’m afraid, Alexander, that I may have fallen in love… with you.”), Goggins and an equally remarkable Kim Coates showed us how fragile and messy even the truest love can be.