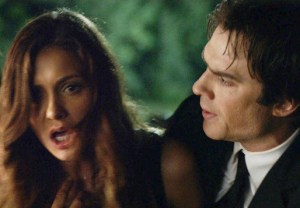 Liam and Damon came face-to-handsome-face for the first time on Thursday’s episode, triggering a flood of weirdness that took the “fun” right out of “fundraiser.” (Or did it make the evening more fun? I guess it depends on how much you enjoy cripplingly uncomfortable social situations.)

And thus began Damon and Elena’s (literal) dance down Memory Lane, but believe it or not, it wasn’t Damon’s artful retelling of their Ms. Mystic Falls encounter that hit Elena hardest; it was this incredible statement: “I would rather spend every moment in agony than erase the memory of you.” Seriously, how does a girl say no to that?

From there, it was smooth sailing — ‘shipping lingo intended — until, well, it wasn’t. Despite hearing about their car crash, their motel hookup and their memorable graduation night, Elena told Damon, “I feel like I’m looking at a stranger.” She attempted to jog her memory by crossing the Mystic Falls border and undoing the compulsion, but Damon simply couldn’t stand to see her in pain.

Ultimately, Damon decided it would be best — for who, I’m not sure — to let Elena continue her life without him. And just to twist the knife into our hearts a little deeper, he remembered the epic #DelenaKissInTheRain. (Come on, did you expect me not to hashtag that?) 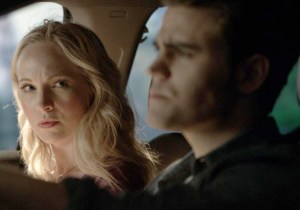 THERE’S A THIN (STERO)LINE BETWEEN LOVE & HATE | Speaking of uncomfortable situations, Enzo (bless his heart) totally blew up Caroline’s spot in front of Stefan with only seven little words: “She’s got a thing for you, mate.” Of course, he quickly made up for that social blunder by putting the “R.I.P.” in “Tripp.” (I have to admit, turning that jerk into a vampire before he crossed the Mystic Falls border was a stroke of genius.)

Team Steroline got a brief reprieve at the end of episode, though, as Stefan apologized for hurting Caroline and she accepted. And while their conversation ended with Caroline walking away — and saying that she hates him — it was definitely a step in the right direction. A very small, newborn-baby step.

BEAR WITH ME | Meanwhile in 1994, which is a segue you can only use while discussing this show, Bonnie and Kai struggled to reassemble the Ascendant before the next eclipse. But if you expected them to work together, you obviously don’t know Miz Bennett very well; after screwing with her hell-mate’s head, the crafty little witch sent a message to Damon (via the world’s luckiest bear) to let him know she’s A-OKai.

Other things we learned this week:

* Jo “relinquished” her magic in order to separate herself from a “dysfunctional family.” She also lost her spleen after being “gutted” by her brother, who is apparently Kai!

* Unlike Kim Kardashian, Tyler is incapable of pouring champagne without spilling it (and he didn’t even have to balance a glass on his shapely butt).

OK, TVD-ers, let’s hash out some feelings: Do you think this is really it for Damon and Elena? Were you hoping this would finally be it for Caroline and Stefan? And, seriously, how does Tyler not know how to pour a glass of champagne? (He’s a Lockwood, damnit!) Drop a comment with your review of tonight’s episode below.