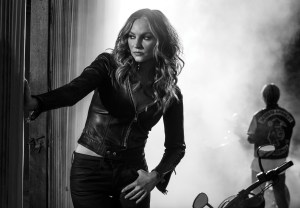 In this week’s Sons of Anarchy, Drea de Matteo‘s arc on the FX drama came full circle when Jax at long last told Abel that Wendy is his real mom. The powerful scene was symbolic of how far de Matteo’s ex-junkie character has come over the show’s seven-year history. As series creator Kurt Sutter recently noted, “The woman who was probably the most damaged in the pilot is [now] the most self-aware human being in Charming.”

De Matteo believes Wendy’s drug issues played a pivotal role in that evolution. “She’s done so much work on herself being a drug addict and being institutionalized for four seasons,” the actress explains. “She now has more of a center — and maybe a little more self-worth — than the other characters.”

In the following Q&A, the Emmy-winning Sopranos vet reveals why Tuesday’s Jax-Abel-Wendy scene turned into a “f—ing mess,” offers an early review of the show’s Dec. 9 series finale, and shares her dream ending for her reformed alter ego (hint: Starbucks is involved).

TVLINE | How did you approach the scene?
It was very hard. I didn’t have any dialogue. I just had to be there. Also, being a mom in real life — and a mom who is separated from the dad — it was easy to go to that place. But, at the same time, it was pretty f—ing hard… It was a long time coming. And it happened three episodes before the end of the entire series. She finally gets to become a mom… I put a lot of time into preparing for the scene and, as actors, we’re like tigers in a cage. When the cameras started rolling, I really lost my s–t. Thankfully, they didn’t use those takes. They used a take after my sinuses and everything had dried up a little bit. [Laughs] I was very, very tame in the take they used. There were other ones where I really lost it.

TVLINE | I would think you would’ve wanted them to use one of your more emotional takes.
No, no, no. It was a quiet moment between a father and a son. It’s really about them. Also, you wouldn’t have been able to hear them talking over my sniffling and crying. I had snot all over my hands — I was a f—ing mess. [Laughs]

TVLINE | Is Wendy still in love with Jax?
Oh, hell yes. Wendy was always in love with Jax, but she knows in her heart of hearts that there’s nothing but danger there. She doesn’t have the kind of survival [instincts] that the other characters have in order to live in that world. Yet she will walk down any hellish street with any of those characters for the greater good of those babies.

TVLINE | Now she’s living with Jax and the kids, essentially playing house…
She’s only been there one night so far. [Laughs]

TVLINE | I have to think that’s going to start to mess with her head as we head into these final three episodes.
I can’t speak about the final episodes, but I know that when I read that script and when I was in that scene folding that laundry, all of that was going through my head. I hadn’t been on that [particular] set since Season 1, so it was the first time I was back in that space. Even when I was walking to set, I started walking to Gemma’s [house]. I was like, “Wait, I’m not going to Gemma’s, I’m going to Jax‘s f—ing house. What does that mean right now? I have to change my whole head space.” [Laughs] It was loaded, for sure.

TVLINE | Is that why she pulled away from him when he hugged her?
Yes. It’s just too heavy and scary for her. And she doesn’t want to get hurt. The goal right now is to just be friends.

TVLINE | The Wendy-Nero friendship has been interesting to watch. Why do you think she’s drawn to him?
They have such similar sensibilities. They’re both there for one reason and one reason alone, and that is for love. And they also have that little demon in the back of their heads that doesn’t mind the insanity and the excitement that comes with that world.

TVLINE | Part of me thinks they’ll be the last two standing and they’ll end up raising the kids together.
[Laughs] I don’t know!

TVLINE | Wendy has always hated that her child was exposed to such a violent lifestyle, yet this season, she seems to be looking the other way and keeping her mouth shut. Why do you think that is?
She knows the rules, and she knows that she’s going to have to play by them in order to be closer to her son. She’s fully aware of how violent and ugly things are getting for Jax. But she’s not going to walk in there and say, “F–k you, I’m taking [Abel].” She’s going to come in and say, “I just want to help.” She has to play in the confines of that world and hope for the best.

TVLINE | How would you characterize these final three episodes?
I haven’t seen the episodes put together yet, and I haven’t fully read them, but the little bit I do know… it might be one of the best series finales of all time. The final episodes are f—ing beautiful.

TVLINE | What’s your ideal ending for Wendy?
Kurt said on Conan that his dream ending would be for Jax to wake up from a dream and be driving his Vespa into a Starbucks. And my continuation of that is that Wendy would be the barista. [Laughs] And he asks her out on a date.