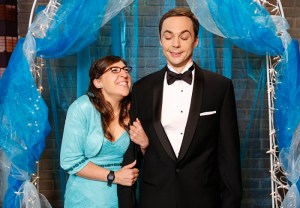 At the end of last week’s prom-themed Big Bang Theory, Sheldon sent an orgasmic shiver down Amy’s spine when he took the L-word right out of her mouth.

Now, nearly one week later, executive producer/showrunner Steve Molaro is dishing and telling about the making of the momentous episode, while also offering intel on the couple’s next major milestone (hint: it may not involve a three-letter word that starts with “s” and ends with “x”). Plus: The EP reveals what Amy did after Sheldon’s profession of love that viewers did not see.

TVLINE | What came first — the idea to do a prom episode, or the idea to do an episode where Sheldon tells Amy he loves her?
The idea for the prom came first. Melissa Rauch and I were trading our sad prom stories and it seemed believable to me that most of the characters in the show probably didn’t have a good prom experience.

TVLINE | Is there a special energy on the set when you shoot these pivotal moments in Amy and Sheldon’s relationship?
Definitely. I think there is always a certain amount of nervous tension in the best possible way when we do scenes like this. The writers and actors take these moments very seriously and we all want to make sure we honor the characters and nail these moments in a way they deserve.

TVLINE | Amy never got around to telling Sheldon that she loves him back — at least not that we saw. Will that be a bone of contention between them moving forward?
I think it’s safe to say she said it back after her panic attack subsided. Several times. Made it her Facebook status and then proceeded to tell everyone and anyone who would listen.

TVLINE | What is the next Amy-Sheldon milestone on your check list?
That’s tough to say. These characters are living, breathing people to me, so I try not to think of them in terms of a check list. To be honest, we didn’t even know the “I love you” was going to happen until we were in the middle of figuring out the prom story.  So I’d like to think there are even more milestones, beyond the bigger more obvious ones, that haven’t even occurred to us yet.

TVLINE | Would it be reasonable to assume there will be some movement this season with regard to their sexual relationship? Also, are you nervous about breaking that story, knowing how much attention it will get?
I have no idea when that will be broached, but I have learned that if we’re sweating and scared of a scene, that’s usually a good sign to do it.