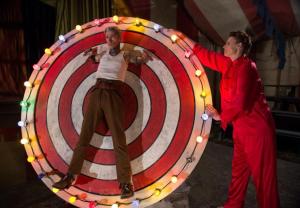 In this week’s episode of American Horror Story: Freak Show, Stanley was determined to make a killing by selling Jimmy’s claws, Paul the Illustrated Seal got himself added to Elsa’s hit list, Ethel threatened to do away with Elsa, and Dandy aimed to make missuses of Dot and Bette. But who — if anyone — was struck in the titular “Bullseye” painted on them? Read on and find out!

WHEEL OF MISFORTUNE | As this installment began, birthday girl Elsa had her spinning wheel moved into the big tent and imagined throwing knives at half the freaks to practice for her TV show. But, with the Tattlers gone, Ethel hoped Fraulein Mars wouldn’t be taking off for Hollywood too soon. “It was selfish of them to leave,” snapped Elsa (who, of course, had facilitated their departure). Nonetheless, Ethel needn’t worry, Fraulein Mars added. By and by, she would have all of the freaks join her in Tinseltown. (Yeah, right.)

Meanwhile, at Mott Manor, Dandy complained that he preferred Dora to the new maid. “Hindsight is 20/20, dear,” Gloria replied, then offered him a present: condoms, lest their incestuous family tree wind up with two-headed babies hanging from a branch. Aghast, Dandy insisted that he could never violate Dot and Bette. He did, however, love them. “It took a woman with the vision of four eyes to find” his heart, he said. What’s more, “when I’m with them, I feel normal.” So, since he liked it, he planned to put a ring on it. “I’m going to marry those girls, Mother,” he vowed.

Later, Elsa perched on a Game of Thrones-y throne to open her presents, including Ma Petit in a slanket to act as a kind of human electric blanket. But the mood quickly soured when the freaks admitted that they missed the twins. Elsa flew into a rage and refused to hear another word about them. Instead of worrying about Dot and Bette, the woman of the hour barked, “I demand that you start having fun this instant.” (Oookay… )

Behind closed doors, Elsa was having fun – with Paul, it turned out! Though she warned him against falling in love with her, she suggested that maybe he could come out to Hollywood with her before the others. Little did Elsa know, Paul WAS in love – with Penny the Candy Striper (whose father damn near caught him in her bedroom).

MURDERERS AMONG US | Back at Mott Mansion, Bette was over the moon, as infatuated with Dandy as he was with her and Dot. Dot, on the other hand… “I have to wonder,” she wrote in her journal, “what dark intentions wait.” Whatever they might have been, they were no darker than Dot’s own intentions. When Dandy pointed out an article on conjoined twins that had been surgically separated, Dot realized that she was looking at the rare guy with more than enough money to get Bette hacked off of her so that she would be irresistible to her crush, Jimmy.

In town, while Paul was buying perfume for one of his lovers, he spotted Dandy purchasing two sets of all sorts of girly things for the Tattlers. Later, Paul suggested to Jimmy that maybe Elsa was envious enough of Dot and Bette to have gotten rid of them. No way, said Jimmy. But Paul accused Jimmy of being too able to pass for normal to see Elsa as the desperate she-devil that she is, not the guardian angel that he imagines.

Next, at Mott Manor, Dandy confessed to the Tattlers that he had been at the site of the Twisty murders – but he, not Jimmy, was the real hero of the story. When Dot stood up for Jimmy and insisted that he wouldn’t lie about such a thing – so much for that surgery she wanted Richie Rich to buy her – Dandy did what Dandy tends to and threw a massive tantrum.

That night, Stanley met Maggie on the outskirts of the freak show and demanded that she lure Jimmy to the barn that the grifter was renting so that he could kill the lobster boy and sell his easily transportable claws. She had a different idea, though, one that would keep Jimmy’s head hands off the chopping block: murdering Ma Petit and transporting her entire body!

MORE THAN STARING DAGGERS | Around the halfway mark, Elsa sang a lovely version of Kurt Weill’s “September Song” to Paul as a rehearsal for her TV show. (She hoped to bring culture to the masses, doncha know.) But, when he tried to beat a hasty retreat, she noticed that he reeked of another woman’s perfume, and their spat quickly escalated to the point where he accused her – on behalf of everyone! – of getting rid of the Tattlers. So, flying well and truly off the handle, she had all of the freaks gathered, threw their gifts around and challenged them to point a finger at her. Jimmy assured her that they trusted her, but she required proof. What kind? One of them had to be strapped to the wheel while she threw knives at them. Jimmy volunteered, but Paul stepped up in his place. “It should be me,” he said. And oh, it was. Elsa nailed him in the gut with the last knife, then feigned horror at how cruelly fate had guided the blade.

At the same time, Penny defied her father – and his shotgun – to leave the house and see the man she loves. By the time she arrived at the freak show, however, Paul was at death’s door (and, of course, Elsa hadn’t really called for an ambulance). Across the fairground, Maggie woke up a trusting Ma Petit and carried her to Stanley’s barn. The tiny woman even willingly let Maggie put her in a jar. “Like a butterfly?” Ma Petit asked. And it appeared that Maggie was going through with it and was going to drown the poor dear!

The next day, Jimmy was shocked to discover that, even after what happened to Paul, Ethel was still icing a cake for Elsa. For better or worse, their conversation was quickly derailed by Amazon Eve announcing that Ma Petit was missing. BRIEFLY missing, that is. Maggie walked up with her would-be victim alive and well, begged Jimmy to run away with her and sealed the deal with a kiss. Unfortunately, short one freak, Stanley was now doubly determined to force his accomplice to bring Jimmy to the barn of doom.

KILLING TIME? | Finally, Gloria discovered Dandy weeping in his playroom over Dot’s damning diary entries. She had even outlined her plan to save up enough of the money she earned from laughing at his jokes to get the surgery she so desired. “I was never destined to feel love,” he decided. And, as he took a dagger out of his toy chest, he revealed that he now knew what he was born for. “My purpose is to bring death,” he said. Luckily, before he could take a whack at the girls, Jimmy arrived.

As night fell on the freak show, Ethel served Elsa a piece of cake (while everyone else was gathered at Paul’s bedside), and Elsa served up a line of bull about Ethel being like a sister to her. Which was all lovely and s—. But, swore Ethel, who is nobody’s fool, “If I ever found out you were lying and did wrong by those girls, I’ll kill you with my own two hands.” The icing on this particular cake? Ethel told Elsa to blow out her candle and make a wish. “I just want to be loved,” Elsa thought. And hey, at least we love her.

OK, your turn. What did you think of the episode? Were you more surprised that Paul was shagging Elsa or that Penny was smitten with the Illustrated Seal? Hit the comments!