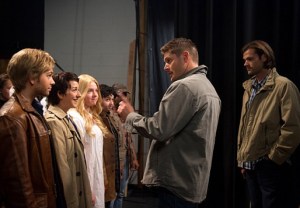 This is a little ditty about two American kids growing up in the heartland.

No, we’re not talking about Jack and Diane, but Supernatural‘s Dean and Sam Winchester, who get a song of their own when they discover a high school musical based on their lives in tonight’s milestone 200th episode (The CW, 9/8c).

Even by the CW drama’s standards, this is not your typical installment — and this is a show that’s had episodes about fairies, Nazi necromancers and LARPing. So TVLine gathered some scoop from the stars and producers on what you need to know about their latest risky, crazy hour.

IT’S FULL OF SONG… BUT NOT FROM THE WINCHESTERS | With everyone belting out a tune, will Dean or Sam join in? “I wouldn’t hold your breath for Jensen [Ackles] or I to sing,” star Jared Padalecki replies. “But that’s not to say that we won’t be singing at some point in time, somewhere.” Perhaps their hesitation to bust out a melody has to do with the horror of stumbling upon a bunch of teenage girls not only crooning about the brothers, but also playing them and their friends and family. “Their reaction is suitably concerned, a bit bewildered and ultimately forgiving,” showrunner Jeremy Carver describes.

IT’S NOT GOING TO “SLAY” | Although Thompson “loved” the Buffy musical episode and calls it “fantastic,” he didn’t draw on it or any other TV musicals when crafting Supernatural‘s lyrical entry. “Unlike something like ‘Once More, With Feeling,’ which is integrated into the story, this is more the boys seeing a music version of their lives,” he explains. “So it’s a little more presentational.” Instead, Thompson listened to “mostly musicals and one movie, Phantom of the Paradise, which is this ’70s, weird Brian De Palma movie which I just love from my childhood. So somewhere in between Rent and Phantom of the Paradise, which is a weird mix,” he says with a laugh, adding that his wife is “the biggest inspiration in this episode because she’s a huge music-theater person.”

IT’S BEYOND BOLD | The CW series has never been afraid to try something new and different (like “The French Mistake” or “Changing Channels”) and the experimental “Fan Fiction,” which Carver describes as “a little bit subversive” and “a love letter [to the fans] wrapped in a little bit of craziness,” is yet another risky venture. “A high school musical is not something you would think would be in Supernatural, but one of the reasons we’ve been on so long is that we’ve never shied away from taking chances,” executive Robert Singer adds. “And this is a pretty big chance, so we’ll see what happens.” 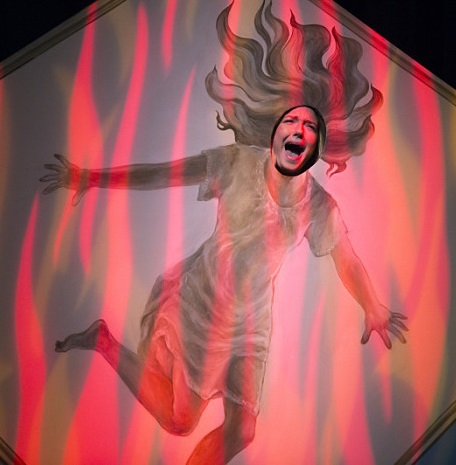 IT’S REALLY META | Expect to see some “iconic moments and phrasing” from the series, teases Thompson. “The songs are very much commentary on episodes that we’ve seen, environments that we’ve seen. And it is very much these fans writing their love letter to the show.”

IT BROUGHT OUT THE WATERWORKS | Reading the script for the landmark installment garnered a surprising response from Padalecki: “It’s not a sad episode, but I felt like I was driven to tears,” he reveals. “The fans won’t be. People watching the episode will be like, ‘He cried reading this?’” So what drove the actor to have such an emotional reaction? “It’s such a communal experience,” Padalecki says. “This show is not Jensen. This show is not Jared. This show is not [creator] Eric Kripke or Bob Singer or Jeremy Carver or [director] Phil Sgriccia. This show is the fandom and the fans and the crew that has made this exist for 10 years. You see shows with Oscar winners and with Emmy Award winners that don’t achieve this. We have none of the above, but we’ve been able to plug into something that means something to both the fans and to us as the performers. It’s something very special that I’ll be forever grateful for.”