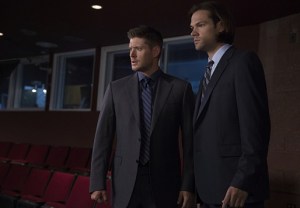 So says Supernatural‘s Dean, butchered name and all, when he and Sam stumble upon a all-girls high school musical adaptation of their lives, based on the published and unpublished works of Chuck – who makes a surprise reappearance! – in the CW series’ 200th episode Tuesday night.

But there was actually plenty to love about the hour – even Dean came around on the music – and lots of nice little touches to the show’s history and the passion of its fans. Most of all, I appreciated how accepting the message was.

While Dean initially balks at the idea of “Destiel” (the students playing Dean and Castiel are a couple) and Sam and Dean as something more than just siblings – “You know they’re brothers, right?” he asks, to which student writer/director Marie replies, “Well, duh. But subtext.” – he comes around and even encourages the teen’s interpretation of Carver Edlund’s works. See, what the Winchesters initially thought was a scarecrow attacking the drama teacher and students is actually Calliope, the Greek muse of epic poetry who manifests creatures from the stories she’s tormenting. She protects the author – in this case, Marie – until their vision is realized. And then she eats them. Gulp. So despite Marie’s panic attack, “the show must go on,” Dean announces, urging her to believe in her interpretation, even if he doesn’t, to allow them to kill Calliope.

“I want you to stand as close as she wants you to, and I want you to put as much ‘sub’ into that text as you possibly can,” he says, rallying the cast. 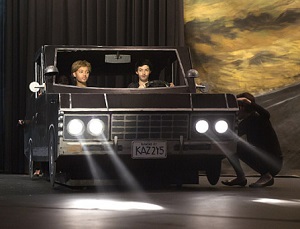 After they destroy Calliope, Dean tells Marie, “You keep writing, Shakespeare… I have my version, and you have yours.” And that’s OK.

Before that, Calliope summed up the appeal of the show when she explained why she chose this production to stalk: “Supernatural has everything! Life, death, resurrection, redemption. But above all, family.”

That last bit is especially evident during the “BM scene” (aka Boy Melodrama, not “bowel movement,” as Dean and Sam guess). When Marie hands over the prop Samulet, the elder Winchester replies, “I don’t need a symbol to remind me how I feel about my brother.”

The musical then stages a surprisingly touching rendition of Kansas’ “Carry On Wayward Son,” and it is crazy how much emotion Jensen Ackles and Jared Padalecki convey without words as their characters watch the number. The girls’ Dean and Sam have their own BM moment about “the two of us against the world.”

“What she said,” Sam tells Dean, who later strings up the Samulet on the impala’s rearview mirror. Awww!

As for Chuck’s welcome return at the end of the episode, he has a short but sweet review of the musical for fangirl Marie: “Not bad,” he says with a smile.

More highlights from the milestone hour: 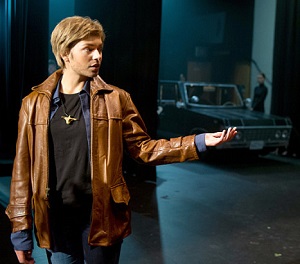 * Let’s talk about the music. The emotion-stirring “Carry On Wayward Son” was, indeed, great, but so were many of the other tunes. From Cas’ ode about waiting around to Sam’s song about Dean’s single man tear, they were the right mix of meta, funny and catchy. And the actresses playing the students could really sing! (All three original songs and the cover will be released on iTunes Wednesday morning.)

* The montage of the show’s title cards over the past nine seasons was a wonderful touch, as was Dean’s “We got work to do” as the boys stood over the impala’s trunk, echoing the pilot.

* Chuck stopped writing, and Marie couldn’t live with the “Swan Song” ending where Dean is cohabiting with Lisa and Sam’s back, but not with his brother. Thus, the musical’s second act is basically her fanfic, involving spaceships, robots, ninjas and Dean as a woman for a few scenes. When Dean tells her what happened over Seasons 6 through 10, she replies, “That is some of the worst fan fiction I’ve ever heard.”

* “Then again, you can’t spell subtext without S-E-X,” Marie tells Dean, who looks straight at the camera with horror and confusion.

* The stage manager after the Winchesters reveal their true identities: “You guys are way too old to be Sam and Dean. Maybe more of a Rufus/Bobby combo.” She has more opinions about Sam. Mainly, “if you cut your hair a little, you’d make a pretty good Dean.” Gilmore Girls shout-out?

* Marie on her wig: “I used this for my one-woman Orphan Black show last year. It’s going to have to work for Sam.”

* The front row gets ponchos for the performance! And hey, they actually come in handy (for the one guy who wears his) when the Scarecrow spews purple gunk all over half of the audience.

* “Who’s that?” Sam asks. Oh, just Adam, your forgotten half-brother, who’s still stuck in the cage with Lucifer. At least the show’s writers are willing to poke at their own lapses in continuity/mythology?

Supernatural fans, how much did you cheer at Chuck’s return? And what did you think of the show’s love letter to its fans? Grade the episode via the poll below, then hit the comments to back up your pick!