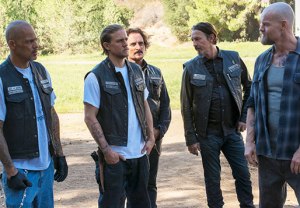 There have been a variety of things in the air in Sons of Anarchy‘s final season: bullets, bloodshed, Gemma’s complicated web of lies.

But until Tuesday’s episode, love hasn’t been one of them.

So, the emphasis on matters of the heart in the FX drama’s latest installment — including seven sex scenes at the top of the hour — was a little disorienting.

There was Jax and Winsome getting it on at Diosa (which was only a matter of time, considering how they first met); Gemma barely acknowledging Nero’s presence in bed; Tig and Venus sharing a steamy evening together; Jarry and Chibs enjoying a rendezvous without Quinn watching; Ratboy and Happy messing around with two Diosa girls (what will Brooke think?!); and Juice enduring a terrible night in prison, courtesy of Ron Tully (technically, it’s six sex scenes and one rape).

What became of those pairings by episode’s end — and how did SAMCRO avenge Bobby’s death? Read on for a rundown of “Faith and Despondency”:

UNFINISHED BUSINESS | First, let’s focus on SAMCRO’s club business. If you were to guess the events of this week’s episode based solely on the logline — “Love is in the air for SAMCRO members, but death wins the day” — you couldn’t be blamed for thinking another club member would suffer at the hands of Moses Cartwright. Fortunately, it was the other way around.

In order to exact revenge on Marks’ security team, Jax enlists help from Ron Tully and his Aryan Brotherhood comrades. The club meets with Otis, a fellow AB member, and a few of his men — except some of those men aren’t exactly thrilled that their brother Leland is being overtaken as Tully’s right-hand man. (And when one of Otis’ associates insults Tig for his relationship with Venus, Tig hits the dude quite literally below the belt. With a bullet in his you-know-where. Ouch.)

Meanwhile, One-Niners leader Tyler “teams up” with Moses Cartwright — notice the quotes! — and helps him track down Grim Bastards prez T.O., who they capture along with Ratboy and bring to the holding room where Bobby was kept. In hopes of getting T.O. and Ratboy to give up the pastor’s family’s location, Moses has their faces sufficiently punched in — and when Moses threatens to grapefruit-scoop their eyeballs out, as he did Bobby’s, T.O. immediately caves. He offers up the address of SAMCRO’s cabin, where Leticia and Grant are being kept, and for a moment, it seems as though Tyler actually has betrayed SAMCRO and the club actually will be blown to pieces.

At least, that’s how it seems to Moses, until he and his men discover they’ve been set up. Instead of offering up SAMCRO’s real cabin, T.O. has given Moses’ team the address of Otis and the Aryan brothers. When Moses’ men hear a cell phone ringing from inside a camper on the property, two of the associates open the RV’s door and trigger a trip-wire bomb. While half of Moses’ crew is blown away by the explosion, the other half — including Moses — are shot at by SAMCRO and the AB, who suddenly appear from the rooftop, the cellar door and every other nook and cranny on the premises until none of Mr. Cartwright’s men are left standing.

But before Moses is offed, Jax takes the “eye for an eye” adage as literally as possible, removing all of the same body parts from him that were taken from Bobby. (Full disclosure: I don’t often take issue with on-screen gore, but this particular scene had me squirming in my chair. And maybe shielding my face with my hands. Just a little bit.) Not only does Jax rip out Moses’ eyeball with his bare hands and enlist Chibs to sever Moses’ fingers, but he does it all in the sloppiest, most gruesome way possible. Case in point: The stomach-turning visual of Moses’ eye dangling from its socket before Jax finally ends the man’s life with a bullet to the head. Oof.

So, with Moses and his men dead as doornails, August Marks locked up for at least a few more days and Leticia and Grant on their way to safety, the only remaining question is: Where’s Leland? As it turns out, the slimiest Aryan brother of them all is en route to the hospital, where he plans to murder Officer Eglee for tracing her injury back to “some white guys with Nazi ink.” Fortunately, SAMCRO tips off Unser when they learn Leland’s plans, and Unser kills the AB member without hesitation. All in all — and in the most messed-up, backwards way possible — I suppose we can call this day a win for SAMCRO?

FAMILY MATTERS | Well, the day is mostly a win for SAMCRO, if you don’t count the massive problem Jax encounters at home. When Abel goes to school that morning with a scrape over his eyebrow — an injury he attributes to baby brother Thomas — he learns from Ms. Harrison that if an adult hurt him, and he tells the truth about who it was, that adult could get in trouble with the school and the police. That’s when a lightbulb goes off over Abel’s head, and he carries out a plan that’s absurdly crafty for a 5-year-old whose facial expression is usually on the “vacant” setting. He locks himself in a bathroom stall that afternoon and — though we thankfully don’t see this part on screen — cuts up his own arm with the fork in his lunchbox. (Maybe plastic utensils next time, eh, Gemma and Wendy?)

When Child Protective Services is called to the school, and Jax and Gemma arrive to see what’s up, Abel shows off his wounds and says Grandma is responsible for them. (Oh no he didn’t!) Later that night, Jax reunites with Abel at his house, where Wendy has temporarily moved the boys until everything gets sorted out. And in a lovely scene that I almost didn’t think we’d get before series’ end, Jax finally tells Abel that Wendy is his real mommy, which brings Wendy to tears. “Jesus, Jax, a heads-up would’ve been nice,” Wendy laughs, and even though Jax just finished telling his son that he and Wendy are better off as friends than spouses, I have a sneaking suspicion that they’re going to get cozy over cups of tea.

That is, until Jax heads into Abel’s room once more and tucks him into bed. That’s when Abel — whose inquisitive nature has led to some of the season’s most jaw-dropping moments — has this exchange with his dad: 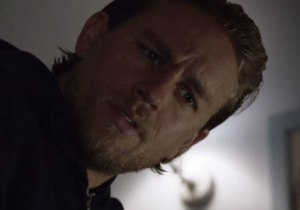 And then Jax’s face looks like this. [see photo on right]

Soooo, next week is going to be fun.

But how do the events of tonight’s episode affect all those close encounters of the bow-chicka-wow-wow kind that we saw at the top of the hour? Well, Jax and Winsome seem like they’ve hit a dead end, after Winsome tells Jax he’s a good — albeit pained — guy, and he immediately shuts her out. Ratboy and Brooke seem in tact, so long as she doesn’t find out he was getting caliente in bed with a Diosa girl.

Ron Tully doesn’t have any intention of letting Juice go, as evidenced by the book of poetry and jar of petroleum jelly he sends to Juice’s cell. (Yikes. Yikes.) Jarry and Chibs are as damaged as ever, acknowledging that they’ll never have a “normal” relationship just moments before engaging in some steamy floor sex that’s sure to leave carpet burn. And, after she’s left heartbroken by Abel’s accusations against her, Gemma turns to Nero, offering to help him get settled at his uncle’s farm — which, considering Jax is almost definitely coming after her, is exceptionally convenient timing.

Still, perhaps no relationship on Tuesday’s episode is more poignant and heartbreaking than that between Tig and Venus, which starts out as the laughing-stock of the Aryan Brotherhood and ends with an incredibly moving conversation between the two lovers. Earlier in the hour (and after the sheets had cooled), Tig suddenly shut Venus out, telling her he wasn’t sure if he’d see her later that day. But when Tig returns to Venus’ place later that night, Ms. Van Dam tearfully acknowledges the obstacles that stand between them. “I allow you to show the world that you live outside the box. But I know that’s where it ends for us,” Venus admits. “But my feelings for you are simpler. They live very much inside the box. I’m afraid, Alexander, that I may have fallen in love… with you.” (Hey, Emmy voters? Just give Walton Goggins the Outstanding Guest Actor statue right now for that line reading, k?)

And in a rare moment where Tig’s guard is lowered, he admits to Venus, “All the things that I hide, all the s—t that I hate about myself… you see it all. And through all that, you still love me? Wow. I’ve never had that with anyone in any box.” But before I rehash the entire scene, down to those gut-wrenching tears, let’s just say TVLine’s Performer of the Week race already has two serious contenders.

So, what did you think of the episode? Which scene shocked you most? Hit the comments with your thoughts!