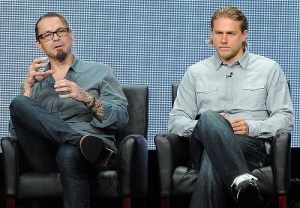 Kurt Sutter is taking the reins of Anarchy Afterword.

The Sons of Anarchy creator will moderate tonight’s roundtable discussion, following the newest episode of his FX series, which airs at 10/9c.

Sutter will be joined by Sons stars Charlie Hunnam and Tommy Flanagan on the panel, with special appearances by Kim Coates and Walton Goggins.

The program’s current host, Chris Franjola, will not be returning; according to a source, the comic stepped down due to his busy standup schedule.

* MTV2 has renewed Nick Cannon Presents: Wild ‘N Out for Season 7 and Guy Code, both of which will air in 2015.

* HBO’s The Newsroom on Sunday night opened Season 3 with 1.2 million total viewers, down sharply from its Season 2 opener (which did not air during the more competitive fall, and certainly not against The Walking Dead). The Comeback led out of that with just 300K, compared to the 920K who tuned in for its Season 1 finale in Sept. 2005.