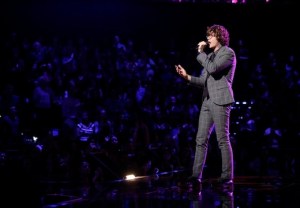 ‘Tis the season to be jolly, Voice fans!

No, I am not advocating the early avalanche of holiday-themed advertising in early November — or throwing subtle shade over another season of NBC’s reality singing juggernaut without social-media dingbat Christina Milian in the “Sprint Skybox.”

I am, however, stoked that We the People (Who Spend Too Much Time Watching TV, Then Subsequently Downloading and Voting), are finally free of the history of repeated injuries and usurpations, all having in direct object the establishment of an absolute Tyranny over these contestants.

(Did I actually quote the Declaration of Independence to express my ongoing rage over the elimination of Season 7 standouts Toia Jones, Troy Ritchie and Amanda Lee Peers? Of course I did!)

Putting it another way, the Season 7 Live Playoffs are in effect — and your votes, my votes, and your half-paying-attention mother-in-law’s votes will help propel deserving vocalists forward, regardless of coaches’ biases. Tonight, Teams Adam and Blake took the stage (while Tuesday will focus on Teams Gwen and Adam): On Wednesday, America’s votes will advance two members of every five-person team, with each coach then saving one of his or her at-risk artists — resulting in a Top 12.

We’ll have a better picture of how things are going to shake out as iTunes charts get updated overnight, but until then, let me offer my snap judgments about how the evening went down: 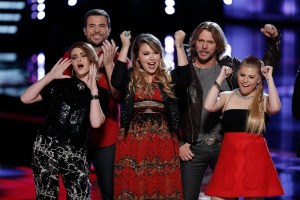 TEAM BLAKE
Definitely, Righteously Advancing
Craig Wayne Boyd — “Some Kind of Wonderful” | Not the most exciting song choice ever, but by virtue of his swampy-soul stylings and remarkable grasp of pitch, Craig made it seem like it was written just for him. That final, growly “talkin’ ’bout my baby” made me hoot and holler like my couch was front row at a CWB concert, and even prevented my automated eye-roll from activating when Blake called it “the performance of the night.” This dude is having a moment — and the resultant confidence is muy appealing, no?

Probably Advancing (But Not Sure She Should)
Jessie Pitts — “Holding Out for a Hero” | Yes, she made it her own – but only by yanking the rug out from under Bonnie Tyler’s earworm chorus and then extracting the horse-gallop percussion of the damsel-in-distress anthem. Half the time, I couldn’t tell if Jessie was making bold (albeit displeasing) melodic choices or merely singing out of tune. But I will give her credit for dialing back on the twee phrasing and affected pronunciations that were hallmarks of her Battle and Knockout Rounds performances.

Would Be a Travesty if She Doesn’t Advance
Reagan James — “Try” | I’ll admit I was mighty impressed by the 15-year-old’s rehearsal package — and her clear grasp of how she wanted Colbie Caillat’s current smash staged and arranged. But even better was the way Reagan executed her specific vision, giving “Try” a more youthful, R&B undercurrent — and showcasing an understanding of dynamic ebb and flow that’s escaped many a female belter over the course of The Voice’s seven seasons. Yeah, there were a couple of hinky notes sprinkled here and there, but if The Voice wants a winner with honest-to-Clarkson pop-star potential, Reagan could be the one.

Rapidly Losing Steam
James David Carter — “Two of a Kind, Workin’ on a Full House” | As if his golly-gee-willikers facial expressions weren’t enough to rob his performance of any sense of authenticity — anyone notice how Gwen, in what could’ve only been a case of brilliant reverse psychology, insisted James David wasn’t “cheesy professional”? — the former front-runner also failed to back up his Garth Brooks cover with any kind of originality or fire. By the time he got into a kinda-kidding, but not-really-kidding-at-all squabble with Adam over wanting to be called “James David” rather than just plain James, you could practically feel half his fan base abandon him for teammate Craig.

The “It Was Fun While It Lasted!” Award
Taylor Brashears — “Long Time Gone” | Taylor definitely has a knack for infusing her personality into her performances, but too often tonight, the fleet pacing of the Dixie Chicks’ number left her winded and behind the beat. Alas, methinks she’ll be a “Long Time Gone” from The Voice stage by week’s end. 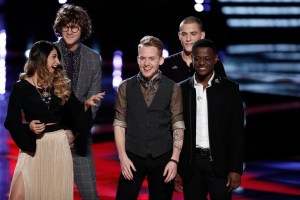 TEAM ADAM
Definitely, Righteously Advancing
Matt McAndrew — “God Only Knows”
I wasn’t a huge fan of Matt’s Blind Audition (or his followup performances, for that matter), but tonight, with a brilliant, beautiful song choice beneath his wings, dude positively soared — delivering a vocal that spilled over with warmth and emotion. Sure, his stage presence needs work: I thought he looked super stiff sitting on the bench — ’til he stood up and began his “conducting an orchestra” arm movements, which were even more stilted. But I suspect that’ll come with time. And given the momentum he’ll get from “God Only Knows,” he’s bought himself at least 2-3 weeks of hands-on Adam mentoring.

Probably Advancing (But Not Sure He Should)
Damien — “I’m Not the Only One”
I wouldn’t have been shocked if Damien popped a couple buttons on his shirt while belting Sam Smith’s been-done-wrong anthem — given the amount of vocal horsepower he put behind it. But while the performance was note-perfect and powerful, it left me slightly cold… making me feel as though the uni–monikered TSA agent was more focused on showing off his range than in bringing to life the lyrics. But the coaches and studio audience went bananas, so perhaps my soul was off taking a snack break during the performance? Please feel free to discuss below!

Would Be a Travesty if He Doesn’t Advance
Chris Jamison — “Don’t”
Does Adam hate Chris? If not, then why’d he give him a sing-speaky Ed Sheeran ditty that not only provides slim opportunity to show off one’s vocal range, but also features a rap-like bridge that would leave even the most gifted vocalist gasping like a gourami in a Dixie cup? Whatever the case, Chris delivered a show-stopping final refrain that earned copious praise from Gwen and Pharrell, but whether that’ll be enough to propel him into the Top 12 is a Mysteries of Laura-level situation.

Rapidly Losing Steam
Taylor Phelan — “Cool Kids”
I luvvvvvvved Taylor’s Blind Audition, but tonight’s “Cool Kids” seemed like a faded Xerox of his one-time glory — more than a few notes trembled like my limbs after a kickboxing class, and somehow the whole performance felt a little small for the stage. Adam’s alreay got Matt blowing up Twitter, so if Taylor needs his coach’s intervention to advance to the Top 12, he could be in trouble.

Prediction: Impossible
Mia Pfirrman — “Young and Beautiful”
Most of what came out of Mia’s mouth sounded fairly solid — it’s just that her “high-school musical understudy” facial expressions added an unwelcome patina of the inauthentic to the proceedings. Adam, however, seemed completely delighted with Mia’s ability to take direction, so perhaps she’ll be his “No. 3” draft choice? (I can never really tell what that Levine dude has on his brain, if I’m being honest!)

OK, your turn. What did you think of Night 1 of the Season 7 Live Playoffs? Take our poll below, then hit the comments with your thoughts!