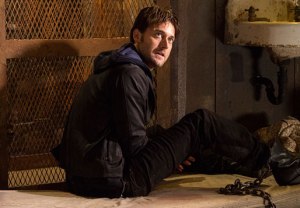 Thus far in the show’s sophomore season, each name on The Blacklist has been more intrinsically linked to Liz and Red than the name that preceded it.

And on Monday’s fall finale, that pattern came to a head as Red and the FBI task force hunted down No. 12 on the list — “The Decembrist” — who also happened to be the man responsible for Red’s longstanding conflict with Berlin.

The NBC drama’s latest installment — its last until Super Bowl Sunday — answered a whole slew of questions that have remained open-ended since May. But what would The Blacklist be without a few new cliffhangers? Before we get your thoughts on the episode, let’s briefly recap the queries that were solved throughout Monday’s pivotal hour.

WHO’S RESPONSIBLE FOR BERLIN’S VENDETTA AGAINST RED? | That would be Alan Fitch, Red’s superior and assistant director of national intelligence (whose portrayer, Alan Alda, seems contractually obligated to appear in only these anxiety-inducing finale episodes). At the start of the episode — which picks up with last week’s Red/Berlin/Zoe standoff — Red learns that Berlin’s life was threatened during a bombing in Kursk, Russia, many years ago. A bombing that killed 15 of Berlin’s associates, no less. The man who ordered the explosion — known as The Decembrist — was also responsible for faking the death of Berlin’s daughter, a feat that Berlin has attributed to Red for all these years.

Red and Berlin initially track down Russia’s finance minister, believing him to be The Decembrist, but the man quickly informs them (before suffering a fatal gunshot wound) that it was an American who ordered the bombing in Kursk. That American? None other than Fitch, who Berlin vows to track down and kill. And that he does! Berlin’s men kidnap Fitch and fashion a high-tech collar around his neck that’s housing a sensitive bomb. And although the task force is able to locate Fitch — more on that in a minute — and attempt to deactivate the bomb around his neck, Fitch realizes it’s a lost cause and requests that all attempts to save his life are ceased. Even Red is unable to get the deactivation method out of Berlin. So, just as Fitch begins telling Red of an important safe he’s got in Saint Petersburg, the bomb detonates and Fitch’s cranium goes ka-boom! as Red somberly watches.

WHAT BECOMES OF BERLIN? | Though Red and Berlin flip-flop between being allies and enemies all night, it seems Red’s use for Berlin expires following Fitch’s death. Not only does Red ensure Zoe a one-way ticket out of town, but Red ultimately decides to off Berlin altogether. The two conclude their day with vodka shot after vodka shot, and just as Berlin gets sentimental about his childhood, Red takes out his pistol and puts four fatal bullet holes in his adversary’s chest. And that’s the end of that.

WHO IS THE GIRL IN BERLIN’S LOCKET? | Ever since the FBI took down the Stewmaker last season, we’ve been left wondering about the correlation between his photo of a young girl, and the same photo placed in a locket in Berlin’s possession. As Red describes to Fitch midway through the episode, the girl came to the Stewmaker many years prior, saying she was in trouble and needed to “disappear.” The Stewmaker took her photo, placed it in a locket and sent the memento to Berlin, who went on for years believing his daughter — the girl in the photograph — was dead. Mystery: solved! (Well, as much as mysteries can be on this show.)

WHAT HAPPENS TO TOM? | In a series of flashbacks at the start of the episode, we see that Liz was unable to go through with killing Tom four months ago, instead choosing to get him off-the-record medical help and shackle him onto the boat. But the associate guarding Liz’s boat is becoming increasingly wary of the prisoner on board — even moreso after the port’s harbormaster finds Tom chained to the wall and complicates an already-messy situation. Ultimately, Liz decides to let Tom go if he clues her in to Fitch’s whereabouts. He does, and walks off a free man — but not before he and Ressler can exchange threatening words that not-so-subtly hint at a mutual affection for Liz. “What are you, her boyfriend?” Tom spits at the agent, which earns him a half-hearted shove from Ressler. Shall we move this to the wrestling ring and advertise it on Pay-Per-View, gentlemen?

Unfortunately, there’s no time for that. Tom walks out of Liz’s life for good after offering up that last bit of intel — but we see him once more, at the end of the episode, sitting across a table from none other than Red. Tom eagerly accepts a thick envelope full of cash and before he exits, Red reinforces, “You are never to see her again.” (Which, as a TV viewer, I translate to mean, “You won’t see Ryan Eggold for a while after this episode, audience members.” Say it ain’t so!) And just before he leaves, Tom looks Red squarely in the eye and says, “For what it’s worth, I was tied up for four months on that ship, and I never told her about us. Not one word.”

So… how many days until Super Bowl Sunday?! (NFL fans, I’m counting on you for the answer to this one.)

* Despite his sliminess, did you not feel a twinge of sympathy for Berlin as he confessed to Zoe, “I don’t know how to talk to someone like you. I know you have your life, but I just want you to stay a little longer”?

* Do you feel weirdly empty now that Berlin’s arc is essentially finished?

* Do you prefer hipster-bearded Tom or lightly stubbled Tom?

* Where was Samar Navabi this whole time?

OK, your turn. What did you think of the fall finale? Grade the episode via our poll below, then hit the comments to back up your choice!