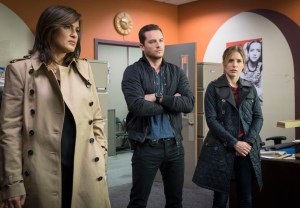 For starters, P.D. detectives Lindsay and Halstead, who have been simmering since the series premiered, are headed to SVU together on Wednesday at 9/8c. Could New York City bring some long-awaited love for the pair? Executive producer Matt Olmstead warns of “further slow burning,” since both characters value their job and do not want to risk the wrath of  Voight, who has a “no dating” policy among his squad members.

“It’s tested a little bit, as you might imagine, because they’re out of town,” Olmstead adds. “But there’s no crossing the line — yet — for those two.”

If someone’s feeling a little lonely, there’s always Severide, whom Lindsay runs into at the end of the Chicago Fire hour (Tuesday, 10/9c). Despite their recent break-up, the encounter is an “amicable” one.

“It’s not like when Severide crosses with her, he’s rolling his eyes like, ‘Oh crap, I’ve got to deal with my ex-girlfriend,'” the EP says. “She’s perfectly agreeable — ‘Good seeing you’ — and she’s got her own thing going on. So it’s an interesting cross, but it’s not one that’s fraught with disappointment and betrayal, because who knows down the line if they’re going to pick it back up again?”

But the most dynamic duo may be P.D.‘s Hank Voight and SVU‘s Olivia Benson, who have a clash-of-the-titans moment on the former’s show (Wednesday, 10/9c). 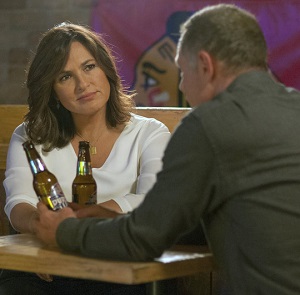 “It was fine when they were in New York,” SVU executive producer Warren Leight says with a laugh. “They have two very different approaches to interrogations. The two shows have different approaches to police procedure. I think we all know Voight can be a little more physical, and Olivia is, in general, a more empathetic detective. Those kind of fireworks take place in both episodes,” he says, leading to some of “the most fun scenes” in the installments.

Although Voight and Benson butt heads, they also come at each other from a place of high regard. “There’s not a lot of people who can go toe-to-toe with [Voight],” Olmstead explains. “So here comes this equal, who he respects [and] is formidable. He knows he can’t run a game on her. Even though they have different policing styles, there’s a mutual respect. They’re both coming from the same place. They both want to protect their city though they may have different tactics going about it. They do lock horns, and they do so equally. But then when it’s over, it’s over.”

The connection between the two carries over when Benson arrives on P.D. in the middle of a grim investigation. “When Voight sees her, there’s a smile on his face,” Olmstead previews. “He’s happy to see her. Because there’s this immediate chemistry, immediate tug [and] shared affection between two very similar characters, ironically, though they may have different backgrounds and different approaches.”

Could that attachment lead to something more than just professional admiration? When Olmstead told star Jason Beghe there was a private moment coming up between Voight and Benson, the actor replied, “‘Don’t say another word! I know exactly how to play it!'” the EP recalls. “So who knows what else… he feels about the Benson character? But there’s a real bond right away between those two characters.” 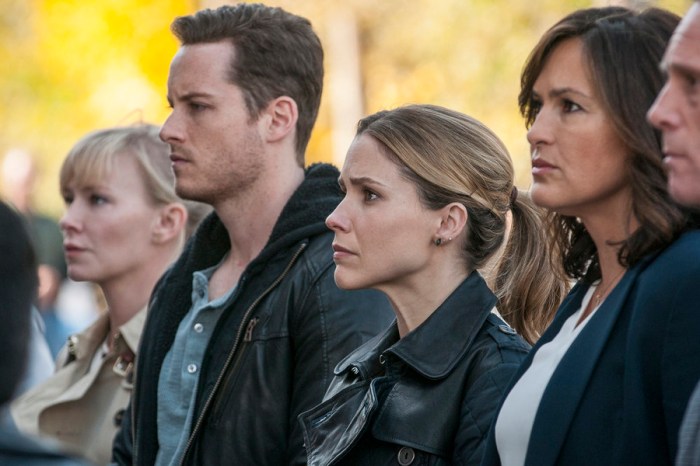