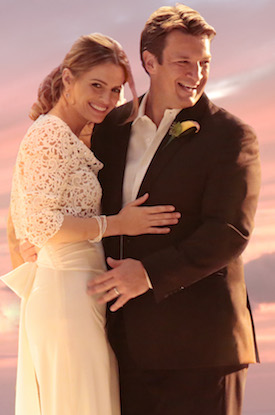 Warning: Regardless of which universe you live in, the following contains spoilers from this Monday’s episode of ABC’s Castle.

When all was said and done, Richard Castle and Katherine Beckett (played by Nathan Fillion and Stana Katic) said “I do” without anything remotely resembling ado, returning to the Hamptons — with a streamlined wedding party in tow — to exchange meaningful, individualized vows.

Sure, before we got to the rings and “perfect” first dance, there was the matter of an unconscious Rick navigating an “alternate” reality in which he and Kate had never met (and where Martha was a theater doyenne about to revive Mame), forcing him to earn anew the trust of those at the 12th — baby daddy (?) Esposito and sad singleton Ryan included! — and eventually find his way “home.” But hey, every wedding day has some drama.

To mark the momentous occasion, TVLine sat down with Stana Katic for an in-depth survey of the marrieds’ bumpy road to the altar and the big day itself, and much more; Part 1 of that Q&A follows.

TVLINE | What were your initial thoughts when you discovered that Kate and Rick’s original wedding day would literally driven off the road by a big twist?
It was a surprise. I just kind of thought, “Oh my gosh, where are they going to go after this?” I didn’t know how they were going to pick up the next season. But I’ve worked with [these writers and producers] for long enough, I’m kind of glad that they’re willing to risk a bit, you know?

TVLINE | As someone whose character’s backstory has been so well serviced over the years — and as a viewer of the show – were you interested to see Rick thrown into his own big juicy mystery?
Well, I think that’s the theme of this season — the show is focusing on Richard Castle. And I think the specific focus of this season is what happened to him during those two months, but also what happened to him that inspired him to become the novelist that he is. I think they wanted to re-mythologize the story, and each of the characters deserves it — especially [Rick] because for so long he just seemed like the “Nothing is ever wrong or bad” guy. It’s nice because it’ll give that character and Nathan an opportunity to add some layers to it. I’m looking forward to seeing what they end up doing with it. It’ll be fun.

TVLINE | Well in those first couple 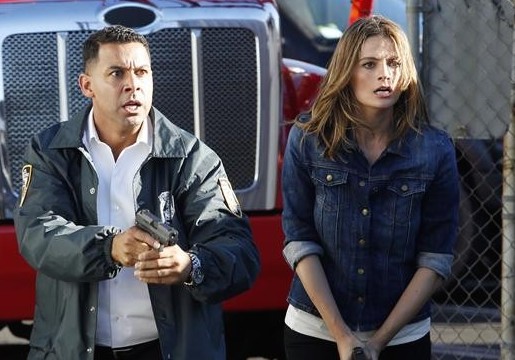 episodes of the season, as precious few details about Rick’s vanishing trickled out, some felt that Beckett was perhaps just this side of being too skeptical, too suspicious of Rick. You know, “How could anybody believe that he was complicit in such a thing?” How do you rationalize her point of view?
Yeah…. I think what we did was we had to justify how all of the evidence is pointing towards him choosing not to make it to that wedding day, and she’s the character who has been taught by Captain Montgomery back in the day to follow the evidence – yet in spite of that, she has chosen to believe in him. But that’s a choice. The evidence doesn’t point to it yet, and finally it did in one of the later episodes — when the [self-made] video comes up and she sees that he actually didn’t want to go down that road and wanted to be there for her.

In the beginning of the season, I think what we tried to do was we tried to pattern out where the character was at because we were following her looking for him, and the first thing is that there’s a fear that he’s hurt, there’s a fear that he needs her help, there’s — God forbid — the worst fear, that he’s not alive. And as she discovers that he’s still alive, that he wasn’t hurt any longer, they found him, the fear becomes that he chose not to be there at the wedding. And he’s a guy who’s had a history of, you know, a number of different relationships, and I think in order to be true to the character you have to wonder if that was the case. But the difference is that this is a mature relationship, they’ve gone through so much, and in spite of the evidence she chose to believe him.

TVLINE | So, with all of that said…. The alternate reality episode was so much fun, and oftentimes extremely clever. Was it fun for you guys to shoot?
Yeah, it was. It was neat to kind of explore what the characters would mean to each other if Castle and Beckett never met. Even what the precinct would have been like. You know, all of the detail that we were trying to go after didn’t quite make it to the screen, but that’s OK. You only have so much time to show what we did.

TVLINE | Is there one example you could give?
Just the nuances that the characters were creating. Like, Jon [Huertas] and Seamus [Dever] did a really phenomenal job of developing the relationship with my character and between [Esposito and Ryan]. There were some moments that they had that were spectacular that I loved watching and being a part of and playing opposite of. So, there were no big scenes or anything that got dropped, just those truly wonderful little moments that we didn’t get to sit in for a little bit, because [an episode] is 42 minutes in the end.

TVLINE | Did you feel any Season 1 “déjà vu” in the scenes where Beckett doesn’t really know this Richard Castle guy?
A little bit. The difference is that she is in authority in this [reality]. There’s kind of a callback to a lot of the Season 1 stuff, but it’s also different because she owns the title of captain. It was funny too, because some of my camera guys said, “Who do you like playing better, real Beckett or Alternate Universe Beckett?” And I thought, “Oh wow, you guys actually see the difference, cool.” It was interesting to see what their perspective on it was and what they liked about Alternate Universe Beckett. 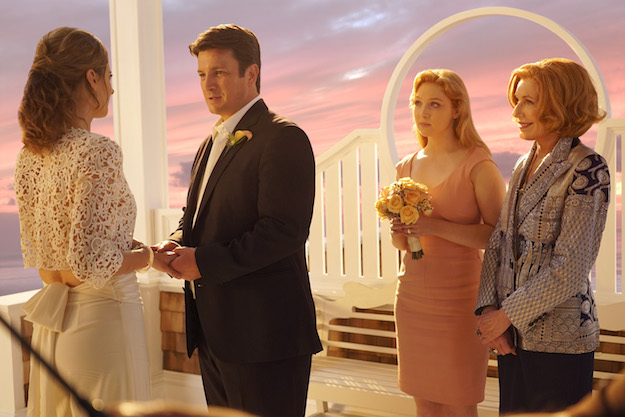 TVLINE | I have to say, we got more wedding than I thought we would. I assumed there’d be an efficient little musical montage at the end – “ring on finger, ring on finger, unheard vows, kiss annnnd fade out.” (View all wedding photos here.)
Right. No, I didn’t know where they were going to place it but I definitely expected to see the characters exchange vows. Definitely. They had to. I mean, it would have been a big letdown [to skip]. And I think it was romantically written, and sweet the things they said to one another.

TVLINE | When all was said and done, was bridal outfit No. 3 the winner?
Yeah. We thought she would come in with something simpler, and something that she possibly could have pulled out of her closet, which is just some pants and a top that she pulled together quickly or maybe shopped for in half an hour, you know? We did go through some dresses, but we didn’t think that Beckett would want to risk it again, you know, by jinxing it with another dress. It seems like as soon as she has a dress, the wedding falls apart!

“From the moment that I met you, my life became extraordinary. You taught me
to be my best self, to look forward to tomorrow’s adventures. And when I was vulnerable, you were strong. I love you, Richard Castle, and I want to live my life in the warmth of your smile and the strength of your embrace. I promise you I will love you. I will be your friend and your partner, in crime and in life, always.”

“From the moment we met, my life became extraordinary. You taught me
more about myself than I knew there was to learn. You’re the joy in my heart, you’re the last person I want to see when I close my eyes. I love you, Katherine Beckett, and the mystery of you is one I want to spend the rest of my life exploring. I promise to love you, to be your friend and your partner in crime, and life, ’til death do us part — and for the time of our lives.”

Coming next week, in Part 2 of our Q&A: Stana Katic shares tales from Rick and Kate’s “Old West” honeymoon, teases the fall finale’s game-changing twist and weighs in on the hottest topic of them all.