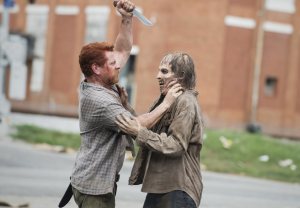 In this week’s episode of The Walking Dead, we hit the road to D.C. with Abraham, Eugene, Rosita, Maggie, Glenn and Tara. And, although not one of them asked even once, “Are we there yet?” the going was still hella tough. Besides the constant threat of walkers, the travelers were beset by heartbreaking memories, guilty consciences and, worst of all, a speed bump that seemed likely to change their direction for good. Read on, and I’ll tell you all about it…

BUS STOP | As “Self Help” opened, the sextet were having a pretty good time on the church bus. Maggie and Glenn were hoping that, by then, Daryl and Carol had returned to Rick and Co., and were right behind them on the path. Abraham responded to Rosita’s teasing about his increasingly shaggy hair by offering to let her shave him “dolphin smooth” all over. And Tara did her best to engage Eugene in conversation. (A thankless task if ever there was one!)

Eventually, Glenn asked Billy Ray Genius how soon after he implemented the cure normalcy would be restored to the world. But he went the “That’s classified” route so fast that neither Glenn nor we really learned anything. Since that topic was off limits, Glenn went for the elephant in the room: “Why the hair?” Eugene’s simple response: “Because I like it.” Aaand right about then, the bus went kerflooey and overturned!

MISSION UNSTOPPABLE | When Abraham awoke from a nightmare/flashback — the first of several in which we found out that his violent protection caused his family to leave him — he discovered that the noisy accident had drawn walkers (but really, what DOESN’T draw walkers?!?). So he and the others had to fight their way out of the bus before it blew up. “It’s time to be brave,” Tara told Eugene. And miraculously, he sorta was, helping Tara take down a walker.

Once the immediate threat had been neutralized, Eugene suggested that they make tracks back to the church. (Hmm… ) But Abraham insisted that the mission hadn’t changed. Besides, he added, “retreat means we lose.” And he was so intense about it that Glenn became concerned about his state of mind. “I’m fit as a damn fiddle,” the ginger hulk swore, so long as they were continuing forward (which they were).

NONFICTION | Seeking refuge for the night in a library, Abraham thanked Glenn for not bailing on the operation, and we saw for an instant how important the mission actually was to Glenn. “World’s gonna change, right?” he asked. Damn right, Abraham replied. Later, Maggie admitted to Glenn that she felt guilty about the friends that they left behind, and Tara caught Eugene watching from the self-help section as Abraham and Rosita got it on. Rather than make a big deal of it, Tara simply made him stop and thanked him for saving her back at the bus. She even encouraged him to think more of himself and his post-apocalyptic survival skills. “You have this,” she insisted.

Finally, the guilt got to be too much for Eugene, and he blurted out that he’d put crushed glass in the bus’ fuel line in hopes of delaying their progress to D.C. Why?!? Tara naturally asked. “If I don’t save the world,” he noted, “I have no value.” She assured him that (a) that wasn’t true, (b) they were all friends now, and (c) she wouldn’t reveal his secret. Alas, Eugene hadn’t told her quite everything… yet.

ZOMBIE SOUP | The following day, Abraham refused to listen to anyone’s suggestion that they rest a while and pick up supplies before taking off again. Instead, he got a fire engine started just long enough to — oops — release the building full of walkers that it had been blocking indoors. After Eugene sprayed the undead with the fire hose — hey, why didn’t the wet walkers just get back up and continue their attack? — Abraham had everyone on the move again so quickly that Maggie scarcely had time to use her Sampson anecdote to try and bond with their resident brainiac.

Mind you, they didn’t get far. This time, it was a sprawling field overrun by walkers that brought the group’s progress to a screeching moaning halt. But, like a broken record, Abraham said that they had to fight through it. There was no turning back and no taking a detour. “We’re not playing that game anymore,” he decreed. So, when even Rosita sided with Team We-Can’t-Go-Right-Through-This-Mess, the big guy flew into a rage and began dragging Eugene away. When everyone intervened on the mullethead’s behalf, he at last admitted, “I’m not a scientist! I lied!”

THE AWFUL TRUTH | At first, Rosita couldn’t believe that Eugene wasn’t a scientist. Regardless, he isn’t. “I just know things,” he said. For instance, he knew that he wasn’t strong enough to make it on his own, but if he convinced people that he could cure the zombie outbreak and restore order, they would protect him all the way to D.C., which he felt presented the best possibility for survival. Trouble was, “I lost my nerve as we grew closer,” he said, “for I’m a coward.”

Naturally, this massive revelation, this colossal betrayal, this total bombshell, left the group dumbstruck. Which is where Eugene should have left them. Instead, he began saying, “Again, I am smarter than you… ” and Abraham punched his lights out. As he walked off a ways, fighting back tears, we got one final flashback that revealed why he was so very dedicated to the mission. After his wife and kids had run away from him, he found their remains and was about to kill himself. But at that very moment, Eugene came stumbling up, walkers only a step behind him. Abraham saved Eugene, and, in hopes of keeping his bodyguard around, the nerd “revealed” that he was on a very important mission. So, in short, the mission saved Abraham’s life. Which means that total BS saved his life. Doesn’t get much colder than that, does it?

OK, your turn. What did you think of the episode? Were you surprised to learn that Eugene was a big, fat liar? Or did you assume that, as in the comics, his pants would be on fire? Hit the comments!