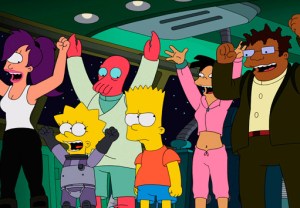 The employees of Futurama‘s Planet Express were temporarily revived Sunday and brought to present-day Springfield for their most important mission yet: killing Homer Simpson.

Read on for the top 10 moments, quotes and general questions from “Simpsorama”:

* No judgment, but is anyone else wondering what Homer and Hedonismbot did offscreen to merit that enthusiastic “woo-hoo!” during the couch gag?

* Homer: “What’s the robot version of bromance?” / Bender: “Romance.” / Homer: “You future guys have a word for everything!” 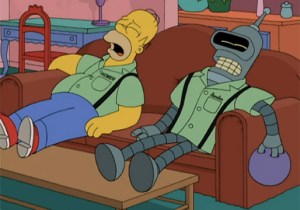 * The realization that Bender is, essentially, just a robot version of Homer. #MindBlown

* As someone who stopped counting how much he’s spent on The Simpsons‘ mobile game Tapped Out, I enjoyed Homer’s heavy-handed explanation of “freemium games.” (Side note: Is it merely a coincidence that South Park made the same joke just days ago?)

* As always, Marge remains the queen of awkward observations. Her exchange with Leela (“Eye am so pleased to meet you” / “Nice to be hair“) was just the best.

* Leela: “In our time, Epcot Center is a work farm for the weak.” / Farnsworth: “But it’s not as crowded as the slave labor camps at Universal Studios.”

* Scruffy’s suicide was one of the darkest jokes I’ve seen on The Simpsons in a long time. I mean, I laughed, but it was still super dark.

* Farnsworth: “Ah, motherly love… Why did we outlaw that?”

* The award for most brilliant joke of the night goes to Lisa (I know, I can’t believe it either) for her solution to New New York’s infestation problem: “Attention, goblins! Madison Cube Garden is filled with Butterfinger bars — and people are laying fingers all over them!”

* Lisa playing a saxophone version of Futurama‘s holophonor was also a nice touch.

What was your favorite moment from “Simpsorama”? Grade the episode below, then drop a comment with your full review.