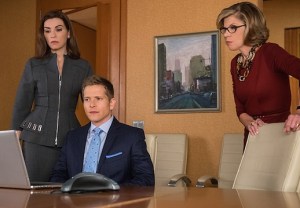 If you lie down with sharks, there’s a good chance you’ll get eaten alive.

That bloody truth continues to cloud The Good Wife‘s sixth season like so much chum in the water.

Lemond Bishop keeps swimming straight ahead, his cold, businessman’s smile threatening murder — yet also reducing the act of taking a life to something utterly mundane. He orders hits as casually as you and I might pick up a gallon of milk at the corner store on the way home from work.

And so, when Bishop tells Kalinda (whose hair has gotten really long, BTW) that her choice of sexual partners makes him feel less than calm, when he sets up a political action committee for Alicia, when he merely mentions Cary’s name in passing, it’s a truly unsettling experience.

Yet our merry band of Florrick-Agos-Lockhart protagonists have invited the unspeakable to their door. As Kalinda searches for a path to save Cary from prison, she endangers the life of almost every person she encounters. (What’s the death toll at? Silver-toothed Jim Lenard, Trey Wagner, his cousin…) As we hear the audio evidence of a flip, funny Cary discussing with Bishop’s crew the transport of heroin, we realize that — out of context or not — the best we can view him is “not guilty” (a far cry from “innocent”). And Alicia’s failure to shut down Bishop’s shadowy campaign fund adds a touch of hypocrisy to her stump speeches about wanting to restore credibility to the State’s Attorney’s office. (I know, I know…in comparison to what might be in store for Kalinda and Cary, Alicia’s problems seem trivial. Heck, even TK down at the soup kitchen doesn’t have much to complain about, does she?)

But back to the adjective I used before: Unsettling. Here we are, eight episodes in to the season, and there’s still this overarching question of where Robert and Michelle King are taking us. There is no Yellow Brick Road — just a grimy, back-alley… and it’s going to end badly for someone. And that’s beautifully, breathtakingly truthful.

Diane’s killer accessories. Alicia’s eye-catching suits. Will’s after-work Scotch. Cary’s $4,000-a-month apartment. Kalinda’s decidedly-not-DSW boots. The delectable infighting over office space and the Chum-Hum account. So much of it has been made possible by Lockhart-Gardner (and now Florrick-Agos-Lockhart) accepting — or, no, courting — the “legitimate business interests” (aka money laundering) of Chicago’s biggest drug dealer.

It’s not easy storytelling — six years in — to suddenly have all this unspoken danger come home to roost. And — who knows? — maybe it won’t turn out to be perfect storytelling, either. But it’s bold and it’s interesting — with roots that extend deeper than perhaps anything happening in TV right this moment. So with that thought expressed, let’s summarize the action from this week’s episode.

THE KALINDA PROBLEM | In a nutshell, Bishop learns that Kalinda is back “on again” — in bed — with FBI agent Lana, and he wants to know exactly what case she’s working on. See, Bishop has learned that the State’s Attorney and the Feds are feeding info to one another, and Kalinda’s promises that Lana isn’t on Bishop duty aren’t reassuring him. “Find out what your girlfriend is working on — if you want me to be calm about you sleeping with a federal agent,” he says, coolly, before telling her to get out of his car. Kalinda, who can’t help but assert herself even in the scariest of times, pauses just for a second before she opens the door — and it just makes me love her that much more. Later, though, she listens in on one of Lana’s phone calls through the bathroom door: “The same with the State’s Attorney — you use him to get to Bishop,” we hear an agitated Lana saying. And then, a moment later, “wait ’til the tap.”

Soon after, Bishop makes another appearance in the parking garage — and Kalinda protects the woman with whom she has this twisted game of cat-and-mouse-and-possible-soulmate, telling Bishop that Lana is working on a “white-collar crime” case. “I don’t believe you,” says Bishop, handing Kalinda what looks like a blank, white hotel key card and telling her to slip it in Lana’s wallet. He won’t say what it is or why he’s doing it — but it’s clear this act of treachery is Kalinda’s only way to stay off Bishop’s “naughty” list. When the time comes, though, she can’t go through with the act, muttering “damnit” to herself and breaking the card in half. Does this mean Bishop will be out for Kalinda’s blood? Does it mean he’ll mark Lana for death (rather than risk the uncertainty of her mission)? And could it spell bad news for Cary, since Kalinda seems to be the only person willing/capable of undermining Bishop to save him?

THE CARY PROBLEM | As mentioned earlier, the audio evidence fed to the State’s Attorney’s office makes us understand exactly why a guy as upstanding as Finn Polmar thinks Cary colluded with Bishop’s crew to help them transport massive amounts of heroin. Cary insists that Trey selectively recorded pieces of their conversation — the better to throw him under the bus — and decides that in light of Trey’s murder, he’s going to have to testify on his own behalf and explain the tapes. Diane calls on frenemy Viola Walsh (Rita Wilson) to do a mock cross-examination, however, and Cary struggles to sound credible in any way. In particular, Viola’s questions about Cary’s early Lockhart-Gardner salary ($85,000/year), Assistant State’s Attorney’s salary ($38,000/year) and subsequent Florrick-Agos compensation ($350,000 with profit participation) — and her amazement that he kept his $4,000/month rental through all three gigs — makes it appear as though he was on Bishop’s payroll all along. “If I’m on the jury, he’s going away for 15 years,” Viola later tells Diane, without the slightest bit of passive-aggressive glee. And Diane’s followup to Cary — “You’re 14 days away from spending a decade in prison!” — spells out just what’s at stake as TV’s best drama careens toward its midseason finale.

It’s Alicia, finally, who’s been examining her own public image (more on that in a second), who stops being polite and starts getting real. “You’re lost in the indignation and the anger,” she tells Cary, and then implores him to let the jury find those emotions on their own. Otherwise, “it reads like entitlement.” Our buff, blonde attorney suddenly rights his ship, giving terse, unemotional answers to Viola — though how that’ll play with a jury remains to be seen. I want to think there’s no way Mr. Agos’ entire six-season arc will lead to him sitting behind bars, a cautionary tale about who we choose as our business associates and what ideals we sacrifice for success, but we’re still too far from the end of the tunnel/season to be confident in that hope.

THE CARY-KALINDA PROBLEM | Cary keeps getting the brush-off from Kalinda — a court-ordered 50-foot distance between them doesn’t help — but when he sees her getting a steamy drop-off kiss from Lana, he sneaks into Kalinda’s apartment (violating bail) and confronts her. Act like you care for the next 14 days, he pleads. “We’re not married. We’re not even going steady,” counters Kalinda, who can’t let on that her relationship with Lana may be the source of whatever intel finally frees him from this legal hell. “I don’t want to be with anybody else,” Cary says, cutting through the couple’s typically guarded, steamy aura. But when Kalinda refuses to offer the same reassurance, Cary — a man who feels he’s living on borrowed time, with few allies in his corner — can’t abide. “Thank you, and go to hell,” he says, cutting Kalinda off. Legally, it’s the kindest, smartest move Kalinda can make, driving him away, but despite the well-heeled investigator’s intimacy issues, I’m pretty sure she’s equally heartbroken by the end of the conversation. 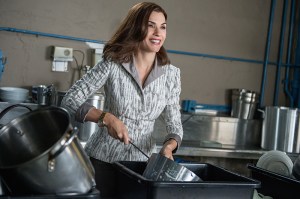 THE ALICIA PROBLEM | As Eli and Johnny roll up their sleeves for some focus-group testing, Alicia makes the unfortunate misstep of walking in right in the midst of a “stuck-up bitch” (Eli’s words, not mine) grousing that Alicia seems “entitled” — that she makes everything about her own pain and her own accomplishments. (The freeze frame of the woman’s cynical expression provides one of the episode’s biggest/most-needed LOLs.) Alicia asks Finn if she’s really got an entitlement problem, if “maybe the people who know me are being too polite,” and he tells her the best way to forget these pesky troubles is to come down and help him with his weekly soup-kitchen duty. What begins as a genuine-ish call to charity — I do love Alicia’s fantasy that a night of volunteer work might change her harshest critic’s opinion — ends very badly when Alicia gets photographed wearing a dazzling designer suit and washing a pot that’s deemed as already clean. Suddenly, she looks like a political opportunist – despite the fact that she hadn’t asked for any media coverage. Eli, enraged with his political advice going ignored once again, gives Alicia all the instruction she needs about being St. Alicia: “If you really want to be a good person, I’ll tell you where to send the check.” By the end of the hour, a re-staged photo op helps restore the shine to Alicia’s halo, Castro withdraws from the race (WHAT?!) and Prady (David Hyde Pierce) declares his candidacy

CASE OF THE WEEK | Owen comes by to make up with his sister Alicia, but also puts on his “puppy-dog face” to get Alicia to help one of his students pursuing disciplinary action against her assailant in a sexual assault case. It’s a doozy of a proceeding that shows the often maddening injustice of university response to on-campus rape — the victim having to point out she was “careful” ahead of time and then having to explain her lack of tears when filing her complaint prove especially chilling — but mostly it’s a way to show us Alicia can still champion a good cause and get deeply invested at a time when she’s supposed to be cutting back on case work. The end result isn’t entirely satisfying for any of the parties, but the perpetrator winds up getting expelled (on drug charges) and Louis Canning suffers a loss in court, so all’s well that ends well, I suppose.

OK, your turn. What did you think of “Red Zone”? How worried should we be for Cary and Kalinda — individually and as a couple? And do you think any of our main or recurring players (ahem, Lana) might be marked for death? Sound off in the comments!