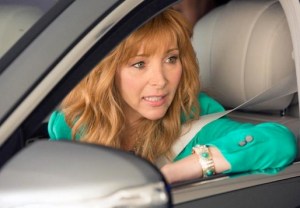 Welcome to the current world of The Comeback‘s Valerie Cherish, a former sitcom star and a pioneer of the “celebreality” genre who was either too smart or too dumb, too proud or not desperate enough, to parlay her own humiliation into the kind of Real Housewives-ian, famous-for-being-famous, famous-even-if-it-leads-to-divorce/jail/addiction/misery/suicide brand of modern celebrity.

When Lisa Kudrow brought us this character almost a decade ago, she made us feel — to often unwatchable degrees — the rejection that Hollywood can heap on an actress of a certain age (and with certain limits to her talent). As Valerie tried to revive her career playing hapless “Aunt Sassy” on the banal network sitcom Room & Bored, camera crews captured her every move for an actress’ eye view of the comeback process. The Comeback — a layered, frequently profound, painfully funny piece of storytelling — only found a cult audience and was cancelled by HBO after one season. Within the context of the show within the show (within the show), however, Valerie — by virtue of being painted as an egomaniacal monster by her reality producers — experienced a startling spike in popularity, and looked poised to parlay it to even greater, probably more self-destructive heights.

With HBO’s decision to revive The Comeback nine years later, we learn this was not, in fact, the case. The first 10 minutes of the Season 2 premiere find Valerie — flanked by a crew of inexperienced film students — attempting to put together a pilot presentation for Bravo’s Andy Cohen, who’d hired her for The Real Housewives of Beverly Hills before Val stormed off the scene, screaming “they’re trying to make me the villain” and astutely adding, “not one of us even live in Beverly Hills!” (as if it mattered). (The “found footage” of Val and a bewildered Lisa Vanderpump also lets us know our heroine had marital troubles with hubby Marky Mark in the post-Room & Bored era.)

While time has not necessarily been kind to Valerie’s career — she shows us footage from a student slasher film, a cameo in a bad crime procedural, an infomercial for her own brand of red-hair hair care — it hasn’t blunted her self-absorption. When one of her crew members blurts out that he was nine when she filmed Room & Bored, Valerie cheerfully scolds, “OK, guys! No talking! That’s the bummer.” Also not blunted? Her own savings/her hubby’s income — as we learn his daughter Francesca is living at his expense in a $1.3 million Manhattan apartment. So no, Valerie doesn’t need a break to survive, fiscally speaking, but spiritually/superficially, we’re not sure how much longer she’ll last on cameos alone.

Valerie’s mission to follow up on an innocuous Tweet from Housewives producer/Bravo ringleader Andy Cohen, however, takes a turn when her agent informs her that her Room & Bored nemesis, Paulie G (Lance Barber, back as The Comeback‘s other absolutely essential character) has penned a post-heroin-addiction dramedy for HBO, titled Seeing Red, that paints her as the villain of his early Hollywood experience. (When Valerie frantically calls her agent for intel, only to find he’s been replaced by one of three people named Sasha at the company, her offhanded comment to the receptionist — “Why don’t we wait five minutes: You’ll probably be my agent!” — serves as a reminder that Valerie isn’t so dim that she doesn’t understand the ridiculousness of her own career plight. She’s just too dogged or too desperate to let that knowledge get in her way.)

The next morning, though, after attempting to film a conversation with an unsuspecting Cohen (and his guest RuPaul) at L.A.’s exclusive Chateau Marmont — which includes the brilliant, heartbreaking line at the top of this recap, one that leaves meta-Cohen utterly perplexed — Valerie begins to understand her that dignity is overrated in the reality format. (“You’re kidding! That’s hilarious,” says Cohen, when Valerie tells him she was punched in the stomach on her way in by an overzealous host.) And so, after briefly bumping into her sweet, guileless Room & Bored costar Juna (Malin Akerman) — now a major rom-com headliner — Val decides to head to HBO headquarters and make the kind of scene that could be the centerpiece of her reality comeback.

“Well, I’m mad,” she declares, getting off the elevator. “And this is about to get messy.”

So messy, in fact, that Valerie happens upon the final casting call for Seeing Red‘s fictionalized version of herself, Mallory Church, spearheaded by the HBO studio exec (Marla Garlin, killing it with only a few lines of dialogue) who also greenlit her Room & Bored role back in the day.

Suddenly, Valerie’s in a room with patronizing execs, a friendly-but-wary Paulie G and her own film crew capturing her deepest insecurities. She’s there to shut down the project, but quickly transitions into eager-professional mode when they tell her they’d called her agent to have her come in and read for the part, but never heard back. Seeing a screen test of Chelsea Handler botching Aunt Sassy’s classic “I don’t wanna SEE that!” punch line, Valerie’s ego, her competitive juices, all come flooding back — despite the alarm bells of having to do a cold read of a dramatic monologue. (As Paulie points out, everyone knows she’s brilliant at bad sitcom scripts, so no need to rehash that part of the character.)

Kurdow is so breathtaking at the episode’s crescendo — as she eyeballs the monologue in front of her, wincing, raising her eyebrows, looking over her bifocals, moving her mouth almost imperceptibly with discomfort — that it’s hard to breathe as you watch it. And then, voice trembling, she begins. “You think I’m this dried-up, middle-aged woman. Look at the jokes you write, look at the track suit you make me wear — all saying the same thing: I’m old, I’m annoying, I’m un-f—able.” (This is what Valerie felt while filming Room & Bored 10 years prior, and 10 years later — despite still enjoying a healthy sex life with her husband, despite still being a beautiful woman with real value in the real world, she has accepted this is her lot in Hollywood. And as a result, the words coming out of her mouth here ring like only the vicious, vicious truth can.)

“Well, I’m not the joke, OK? You are, Mitch.” she continues. “And instead of spending all your time trying to make me the joke, why don’t you do your job and write me one?” Here, Kudrow lets Valerie’s anger really percolate — she’s not the vain former star of I’m It trying to land a role, she’s merely giving voice to the feelings she usually keeps locked under a patina of Tinseltown superficiality. “Huh? A real joke, Mitch. Not you and your boys off in a room making fun of an old woman’s p—y. Yeah, I heard you. I heard what you think of me. I heard it. Well maybe you and everyone in television — oops, said it wrong — well maybe you and everyone in the television business can’t see me as desirable, but there are plenty of men out there who… but there are plenty of men out there who would still wanna [pause] f— an old lady like me. So f–k you Mitch, just f–k you, and F–K YOU!”

The silence in the room is so profound, you understand Val wanting to break it by noting, “That’s just a little too — just up there” while pointing skyward — a callback to The Comeback pilot’s overzealous “WELL, I GOT IT!” — and then doing her trademark folded-hand, namaste now. She’s sure she’s blown it — though what a coup for her Bravo pilot presentation — but the mic that’s still attached to her chest begins to reveal otherwise. They’re reluctant to cast her, but how can they not?

Back home, Valerie’s on camera again — her crew having missed the call from her agent to tell her she scored the Seeing Red part, just like her old reality program couldn’t film her Room & Bored casting moment — but when “Markie Mark” gets the news and responds with a perfectly reasonable, “No way, Val. I mean, no f—ing way,” we get a glimpse of the fresh hell that awaits Red and everyone in her orbit.

No matter how bleak it gets though, there’s a joy in the return of Valerie — every ‘well…’ and ‘you know’ and grimace and autopilot chuckle that follows one of her own wry observations to the camera. Now if she can just avoid the giant cupcake costume this time around, Red should be golden all over again.

What did you think of The Comeback premiere? Was it almost too painful to watch without pausing? Did you tear up during the Seeing Red monologue? (I did!) And do we trust Paulie G is a kinder, gentler soul now? Sound off in the comments!