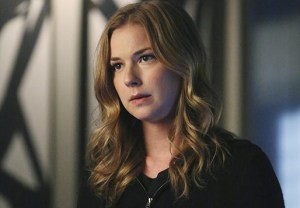 Ladies and gentlemen, Revenge‘s proverbial cat is finally out of the bag. Actually, that’s a bit of an understatement. More accurately, the cat emerged from the bag, ripped it to shreds and peed all over it. Meow.

That was my roundabout way of saying that Emily finally revealed her true identity to David in the final moments of Sunday’s episode, though it wasn’t exactly the warm-and-fuzzy reunion we’d all been hoping for. Upon discovering that David had been monitoring Amanda’s activities in the Hamptons, Emily lashed out at her crazy bearded father for not coming to her aid sooner. Needless to say, he was a little too stunned to explain himself.

So how does Victoria plan to avoid being exposed for the double-crossing, impeccably dressed villainess that she is? Well, it turns out Vicky always has a Plan B — even when she doesn’t realize she has one. A brewing storm struck down a power line outside Emily’s old place, knocking Victoria unconscious as she attempted to flee the scene of the Clarke Family Reunion 2014.

(Only on Revenge is getting electrocuted considered a stroke of luck.)

GOING DOWN? | Of course, Victoria wasn’t the only Grayson who had a shocking encounter with Emily this week. Daniel — who finally knows Emily’s secret, thanks to Charlotte’s pre-exit confession — attempted to intimidate her during an unfortunate elevator run-in, but in typical Daniel fashion, Emily shut his ass down almost immediately. It’s often said that God doesn’t give with both hands, and I’m pretty sure Daniel Grayson is living proof of that.

HOT IN HURR | I’ve said it once, but it begs repeating: The crazier Louise gets, the more I love her — and this week, we finally learned the source of her insanity. She’s been having visions of her mother, played to absolute perfection by Carolyn Hennesy, who doesn’t seem to think Louise is good enough, no matter how hard she tries. This week’s wacky action (“wacktion”?) involved Louise locking Margaux in the steam room at their health club, nearly killing her. But neither attempted murder, nor a glass of wine in the face — courtesy of a steaming mad Margaux — was enough to convince Daniel to drop Louise as a client. He sure does like ’em crazy!

NOLAN: UNPLUGGED | Have Nolan’s days of Liberace-esque excess finally come to an end? Tired of the media hounding him night and day — he’s even managed to predict the arrivals of news helicopters to the second — the former party boy bought himself a new, off-the-grid Batcave this week, and from Mr. Sheffield, no less! I have no idea what Nolan’s next move is, but should he decide to adopt a trio of golden-haired children, I’m sure the house’s former owner could recommend some good help.

BEN IS STILL HERE | Show of hands: Do we think Ben was born with that enormous stick up his butt, or did it come with the badge? When he told Jack he wasn’t allowed to make a personal call to Emily during his shift, I became one of those nut jobs — no offense, Louise — who talks to people that aren’t there, though I’d rather not repeat what I yelled at TV-Ben in the event that children are reading this. Anyhoo, Ben continued his investigation into Conrad’s murder, and at this point, I have to ask: Does anyone else think the former Grayson patriarch might still be alive?

All right, Revenge-rs, let’s talk: Was Emily and David’s reunion everything you hoped it would be? What would you like to see Louise do next? And am I alone in my Conrad theory? Drop a comment with your review of this week’s episode below.