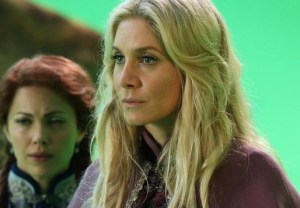 This Sunday on ABC’s Once Upon a Time, the Snow Queen plotted to make Emma let it go-o-o-o, while in flashback we learned the tragic story behind how three Arendelle sisters became one.

IN ARENDELLE THAT WAS…. | It was as a young lass, frolicking with her sisters Helga and Gerda, that Ingrid first unleashed her ice magic, in the name of protecting them from a creeper. Then and there, the girls make a pact to always be there for each other, as symbolized by the ribbons on their wrists. But as a young woman — after eavesdropping on their father’s 7oth birthday gala and seeing Helga courted by the Duke of Weselton — Ingrid decides it is best for all if she leaves. Gerda counters that they should at least seek the help of a mighty sorcerer in Mist Haven aka you-know-who. Rumplestiltskin offers as a first line of defense gloves for Ingrid to wear. But as a fail safe, he supplies an urn to trap her in. In trade, he asks for the sisters’ ribbons, which symbolize their vow to one another.

Back home, the Duke stumbles upon the mysterious third sister Ingrid, and makes a ham-handed pass at her. Ingrid fights back, unleashing a  burst of magic on him. When Helga arrives, the Duke vows to warn all the realm of Ingrid’s wickedness; Ingrid goes to zap him again but hits and fatally freezes Helga instead. An aghast Gerda then arrives on the scene and — despite a devastated Ingrid’s pleas to “take my hand, you’re all I have” — labels her sister a “monster” and traps her in the urn. Gerda then asks Pabbie to erase the realm’s memories of Ingrid and Helga, as if they never existed — though the troll warns, the truth has a way of coming out.

IN STORYBROOKE…. | Emma and 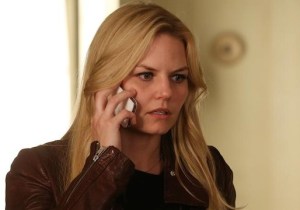 Elsa practice a spell to trap the Snow Queen, but don’t have time to fine-tune it before Emma has to swing by Mary Margaret’s Mommy & Me class to babysit her brother for the day.  Just as Emma freaks the princess posse out a bit by making Neal’s bottle boil, duty calls: the Snow Queen is up to no good in (of course) the clock tower. Emma and Elsa successfully enact their new spell, shackling the Snow Queen, whom they then bring to the sheriff’s department to interrogate. After Elsa goes a little too Kate Beckett on Snow Queen, Emma seizes some one-on-one time with the kook who’s out to conjure a new family. Evoking Emma’s days in the foster system, Snow Queen remembers her as a “lovely child,” saying they were not “friends but family.” Still, Emma holds firm: “What you want ain’t gonna happen, sister.” Snow Queen then sets out to create doubt in Emma’s mind about her actual family, saying, “They may love you, but they also fear you.” That they treat her more as savior that daughter.

Those mind games pan out when, after accidentally blowing a hole in the building side with her out-of-control magic (“It’s you, Emma, and it’s beautiful,” Ingrid beams), and then toppling a lamp post on top of poor David, Emma indeed sees fear in her parents’ eyes. After she races off in the Bug, Mary Margaret says to David, “We failed today,” that no Shattered Sight curse is needed because they are turning against each other all by themselves.

Elsewhere: Robin pays Regina a visit, but she reminds him that hearing about his “conflicted heart” is nothing but “torture” for her. “You need to forget about me” and my pencil skirts, she affirms, “and think about Marian,” so that he may one day revive his wife with True Love’s Kiss. Robin later gets advice from a most unexpected source, Will Scarlett, who wants to “make amends” for what he did in the past — “and over a woman,” Robin reminds. “And where is she now?” That allusion to Anastasia obviously hurts Will, who elaborates none on what ultimately happened there other than to say, “Sometimes when you win, you lose.” Still, his counsel for his former comrade is to stay the course when it comes to true love — that if you find it, you should fight for it every day, because it always is worth it.

At hour’s end, Snow Queen arrives at Gold’s shop ready to make a deal: she gets her ribbons back, and in trade she will share with him the one “missing piece of the puzzle” he needs to detach himself from the dagger’s grip, thus allowing him to roam free and work his magic on a territory more grand than the tiny Maine burg. “Do what you want with the rest of the world; Storybrooke will be mine,” she says before leaning over and whispering to him the vital piece of information. Rumple grins, then says, “Not only can I do that… but I shall do it with great pleasure.”

NOTABLE QUOTABLES | “Have I ever told you about how I met Marian?” “Only about three dozen times.” “I stole her father’s horse….” “Three dozen and one”…. “What’s a CD?”…. The Duke danced just as badly as in Frozen!… We had another sighting of Thor’s hammer when Ingrid et al visited Rumple.

What did you think of  the episode “The Snow Queen”? And what do you think is the missing piece of the puzzle that Rumple so gladly will obtain?