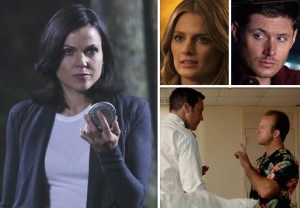 Will Once Upon a Time‘s Regina reclaim her Storybrooke throne? Will Castle unleash badass Beckett? What’s new in Five-0‘s alt reality? Will a Brooklyn cop come clean about her feelings? When will Gotham‘s Bat meet Cat? Read on for answers to those questions plus teases from other shows.

Two weeks ago, Once Upon a Time‘s Lana Parrilla posted a picture of herself and Robert Carlyle in the mayor’s office. Please tell me Regina is back to being mayor! –Teresa
When will we see more Regina-centric flashbacks on Once Upon a Time? –Fred
Hey, everyone, watch me kill two birds with one scoop: Yes, you will see Regina be mayor again… in an upcoming flashback, to when Regina held the Storybrooke office and met the Snow Queen for the first time.

On the current season of Brooklyn Nine-Nine, Amy’s feelings for Jake have been a mystery to us. Is there any chance that we will get some insight as to how she feels? –Genesis
You know what tends to get people talking? Road trip! And in an upcoming episode, Jake and Amy will take one, to transfer a prisoner — and the only “escapee” will be a glimpse at what Amy’s feeling these days.

Do you have any more tidbits from your interview with Castle showrunner David Amann? –Mandy
Well of course I had to ask if there were any “badass Beckett” moments to watch for, seeing as they’ve been in short supply this season, and he did not disappoint. “There is a badass Beckett moment of sorts – I mean, I would consider it a badass Beckett moment — at the end of Episode 7, ‘Once Upon a Time in the West,'” he shared. “Keep your eyes out for that.” BONUS SCOOP: This just in… Episode 12 will make like Jane the Virgin and revolve around the cast of the telenovela Santos Desperaodos, begging the question: Has Kamar de los Reyes already guest-starred?

Have you had the chance to watch the 100th episode of Hawaii Five-0 (airing tonight)? Not asking for spoilers, only if you liked it. –Mary
I finally got to it, and be forewarned that the cold open will be a bit confusing — you’ll think you’re rewatching the pilot, until a pivotal scene plays out quite differently. That “alternate reality,” which McGarrett continues to live through while being tortured by a captor, is filled with fun, light moments (e.g. Danny’s ringtone for Rachel, Kamekona’s new “look,” Kono’s non-Five-0 occupation), but the actual torture sequences are decidedly dark. The episode also features a thrilling, extended brawl, copious amounts of shirtless Steve (if that floats your kayak) and a final montage loyal viewers won’t want to miss.

I absolutely loved the opening scene of last week’s Supernatural, with Sam and Dean (with shades on) overlooking the lake. But even through the end of the episode, Dean was surprisingly (and a bit disappointingly) cool and put together, post-Demon. He’s goanna explode or have an emotional meltdown soon…right? –Audrey
Considering the Mark of Cain is still haunting the elder Winchester, that is a strong possibility. In fact, the pesky problem is going to take up a lot of storyline real estate going forward. “You’re going to see Dean dealing with this pretty much for the next chunk of the season, as he and Sam take different paths in how to deal with it,” executive producer Jeremy Carver teases. “While we’re all very happy he was cured of being a demon, there’s a lot more work to be done.”

I was so not expecting Supernatural‘s Dean to go so far with his kill-Sam campaign! Now that human Dean’s back in business, how long until someone brings up that pesky Cole is fluttering about? –Sam (no, not that one)
EP Jeremy Carver responds, “Who’s to say Cole resurfaces…? But if he did, that would be a heck of a confrontation. I’m looking forward to it as much as you are.”

I’m dying here! All I can think about 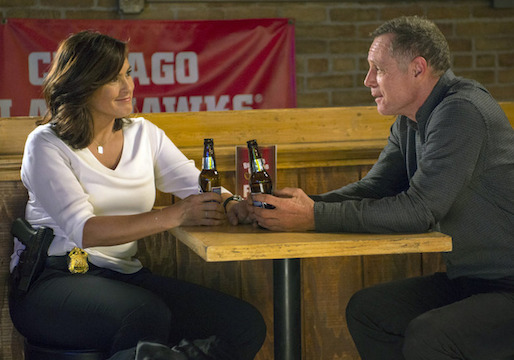 is next week’s epic Chicago Fire/Chicago P.D. /Law & Order: SVU crossover! Please tell me you have a scoop on that, preferably related to P.D.’s Intelligence team. –Saadia
I can say that P.D.’s Voight, Halstead and Lindsay visit SVU upon realizing there’s a trafficking ring that’s sending kids from Chicago to New York. And while Voight and Benson may have “different” ways of dealing with suspects, they will learn from one another (and, I am hearing, “light up the screen” together).

Any scoop on Jane the Virgin? Maybe something about Petra’s (or should I say Natalia’s) mysterious meeting from this week’s episode? — Katie H.
“Petra’s past will continue to haunt her,” affirms EP Jennie Snyder Urman, until “things come to a head with her blackmailer in Episode 6.”

Do you have anything on The Mindy Project? –Nathalia
Mindy Kaling recently teased for us “a bit of a Castellano reunion,” though I have yet been able to pin down exact details or the airdate. “I have not talked about it yet so far with anybody [in the press], but that’s coming up in the not too distant future,” she added. “And it goes pretty terribly, as you might guess.”

Do you have any scoop on The Big Bang Theory? –Aleksandrs
LeVar Burton will reprise his role as himself in the Nov. 20 episode — marking his third appearance on the CBS hitcom — when Sheldon invites the Star Trek vet to make an encore appearance on his “Fun with Flags” web series. (The same episode also brings back John Ross Bowie aka Sheldon’s frenemy Barry and Stephen Root, as Penny’s boss Don.)

Do you have any Scandal or How to Get Away With Murder scoop? –Colleen
I choose Murder (and always do, heh….), if only because I’ve got a few details on Marcia Gay Harden’s recurring role, which sounds right in her wheelhouse. The character is described as intelligent, well educated, confident and friendly, if not also a but intimidating. Hailing from an academic family, she does not suffer fools, and was raised to speak her mind — and that is exactly what she does, especially if witness to an injustice.

Do you have any scoop on Vampire Diaries‘ Caroline or The 100‘s Clarke? –Amy
Once again choosing Door No. 2, I’ve got The 100‘s Eliza Taylor previewing the unlikely alliance between Clarke and Anya (played by Dichen Lachman): “I loved the idea of them like kind of begrudgingly having to team up. And in Episode 4, you do see a lot of them trekking through [the outside] trying to find their people.” But given unresolved tensions coming out of that Season 1 finale (when a buncha Grounders got roasted), it won’t be a completely unified front. “A lot of stuff goes down between them,” Taylor teases. 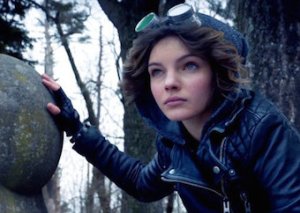 past few weeks. But I have to wonder, will Selina and Bruce ever meet? –T.W.
In the Nov. 17 episode — which marks Nicholas D’Agosto’s debut as Harvey Dent — Selina will take residence at Wayne Manor, which strongly, strongly suggests these fated frenemies will finally come face to face.

Long time no Resurrection scoop! Care to change that? –Aly
Episode 11 is guest-casting two “returned” women — Hilary, a burly “Rosie the Riveter” type from the 1940s, and Robin, a contemporary lady – who are being detained at the government facility with a very familiar face who thus far has been allowed to roam free in Arcadia. Thus far.

With The Newsroom‘s third and (sadly) final season imminent, I was wondering if there are plans to resolve Season 1’s “death threats against Will” storyline? Was Neal secretly hunting the hacker off-screen during Season 2, or is the storyline just being dropped? (Please say it’s the first one.) –Ryan
Your last line there precludes me from answering, sorry! (Watch for Jeff Daniels to elaborate in an imminent TVLine Q&A from Kim Roots.)

How come we never see Will’s ex-boyfriend and Layla’s manager Brent (played by Derek Krantz) on Nashville anymore? Will we see him on the show again? –Chris
Not anytime soon, no.

Thank you for all the Criminal Minds scoops you bring! May I ask for another? Are there going to be any JJ/Garcia scenes in Season 10? I miss their friendship. –LittleKitten
I honestly cannot say for certain if/how Garcia figures into the storyline, but in Episode 11, “The Forever People,” JJ will deal with the PTSD resulting from her 200th episode abduction.

Not sure if this is the proper avenue to express our concerns about program background music, but we have a hard time hearing the TV actors’ conversations. It is quite annoying. –Dennis
I actually get weekly letters about this, but never thought much of it – until last week’s episode of How to Get Away with Murder, where I had to turn the closed-captioning on to hear an important conversation. My powers are sadly limited here, but maybe publishing your Q will hit the eyeballs of some sound mixers.

Real questions, real answers. If you need the Inside Line on a favorite show, email InsideLine@tvline.com! (With reporting by Vlada Gelman and Kim Roots)