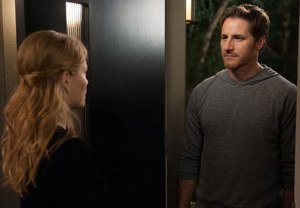 Is there an official petition we can sign in protest of NBC’s spoiler-filled “Next week on…” promos?

I realize that might be a bit excessive, but there’s no better example of the Peacock Network ruining a climactic moment than Thursday’s episode of Parenthood, which found Joel and Julia finally taking a baby step toward reconciliation.

Even though we Joel/Julia fans were cheering at our TV screens (and/or wiping that darn dust out of our eyes) when Joel finally fought for his wife, didn’t we all know this moment was coming? Aside from the dialogue, weren’t we completely prepared for those last two minutes, rendering the scene way less impactful?

Perhaps I’m alone in my indignation — which is very possible — but I’m going to leap off my soapbox and instead focus on recapping Thursday’s exceptionally cathartic episode. Join me, won’t you?

Speaking of Joel and Julia, the drama’s latest hour focused mostly on their fragile relationship, which is nearing a devastating end as they prepare to sign divorce papers — a process that’s gone remarkably quickly, especially when Joel gives Julia their entire house without hesitation. The house isn’t merely an asset, Joel insists, even when Julia gives him a second opportunity to “take the emotion out of it” and reconsider his decision to let her keep it. It’s where they shared their family’s best memories. And although Julia has put on her best lawyer face throughout this entire ordeal, the cracks start to show early on in this week’s episode. First, the couple shares a heart-wrenching moment in the law firm’s elevator, as Julia reaches out for Joel’s hand upon realizing their marriage is, indeed, a signature away from its conclusion. Later, Julia is overcome with emotion again after Joel confesses, “If I can’t have you in it, I don’t want [the house].”

But Julia seems most uncertain about signing the divorce papers after an evening at home — at her home — with Chris, where her beau is unsure how to discuss the divorce topic and is ultimately told to go home instead of staying the night. And she’s not the only one having second thoughts: When Joel pays a visit to Zeek to thank him for being a role model, and to unofficially say goodbye to the Braverman family for good, Zeek is having none of it. (Pardon any forthcoming typos, these sudden tears in my eyes are blurring my vision.) “If you love her, Joel, you fight for her,” Zeek tells his son-in-law. And fight for her he does. In the episode’s final moments, Joel drives over to Julia’s place and pleads from her doorstep, “I don’t want to live another day without you. Another second. I want you back.” And while Julia doesn’t immediately respond, I think we can call this a victory for now — piles of Kleenex notwithstanding.

* Amber gets a crash course in parenting as she babysits for Max and Nora, which quickly spirals into a failed outing to Alcatraz Island. Max has a complete meltdown when their travel plans get derailed, and upon realizing that Amber’s ride isn’t car seat-compatible, screams that she’s going to be “the worst mother in history.” (And while I know Max’s outbursts can’t always be helped, this thoughtless insult even stung me.) Fortunately, Sarah comforts her daughter later that night, assuring her that parenthood doesn’t start out with the teenage years — just a lot of poop.

* Also in Sarah’s corner, she’s put in yet another awkward situation when Sandy arrives to pick up Ruby earlier than planned. Sandy doesn’t take too well to her 15-year-old watching Fast Times at Ridgemont High with Sarah, and Hank flees the scene when he realizes the ladies are once again having a tense moment. Fortunately, Hank realizes his vanishing act was a bad idea, and later confesses to Sandy that he’s got Asperger’s. (Something that, strangely, hasn’t been brought up in Season 6 until now.) “It must have been hard to be married to me,” Hank admits. But there’s a silver lining to all this: Sandy, with a renewed sense of commitment to her family, commandeers a frozen yogurt date with Ruby, Hank… and definitely not Sarah. Whoops.

* Hoping to make some new memories with his grandson, Zeek gets Drew to drive him around California in search of some good times. First? A (sorta) harmless trip to Big Top Burgers. Next? Drew’s first time shooting a gun, a milestone for which the younger Braverman isn’t on board. But later, when Natalie points out that Drew is selfishly keeping Zeek’s nostalgia at bay, he finally agrees to take shooting lessons with his grandfather — but at an actual shooting range, and not the front steps of a liquor store. (Once again, Drew’s levelheadedness saves the day!)

OK, your turn. What did you think of the episode? Wasn’t it a little hilarious that Zeek shouted to an “off-screen” Camille, even though Bonnie Bedelia was clearly not in this episode? Sound off in the comments!