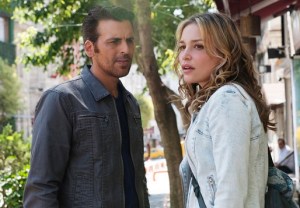 When Covert Affairs resumes this Thursday (USA Network, 10/9c), Annie’s maybe-boyfriend Ryan is unconscious and her ex Auggie is working for another spy service. But that doesn’t mean the former CIA agent will be lonesome, especially when she runs into frenemy Eyal (returning guest star Oded Fehr).

The familiar face is a welcome one for Annie, who gains a bit of clarity from Eyal’s presence.

However, Annie’s world is one of spies and terrorists, so her pursuit of Belenko will only get more complicated when Auggie is pulled into the web in a “significant” way, executive producers Matt Corman and Chris Ord preview below.

TVLINE | Can you set the stage for where the back half of the season picks up?
MATT CORMAN | We revealed our Big Bad at the end of [Episode 10]. We also find McQuaid in critical condition in the hospital, which deepens Annie’s emotional connection to the mission. And then in terms of the next six [episodes], as Annie pursues Belenko, [she discovers his] motivations and realizes it’s a much deeper, more personal connection for his vendetta. That will makes things richer and deeper, more interesting and also much, much, much more emotional.

TVLINE | What’s Annie’s mental state like in the premiere?
CORMAN | She’s at a crossroads, and she’s trying to find where her emotions lie romantically. She’s finding her foothold as to where her place is vis-à-vis the CIA or not. These back six episodes are the space in which she’s defining who she’s going to be as a person and as an operative for the rest of her life.
ORD | It’s also the perfect time for Eyal. He comes into her life when she is at moments like this and helps her tremendously in terms of clarifying her purpose.
CORMAN | He’s a character who is so sure of himself. He’s sure of himself vis-à-vis the agency, and he understands himself. He keeps things very simple and clear. It can be helpful for Annie to talk to somebody who is such a rock.

TVLINE | Under what circumstances does Eyal come into Annie’s life this time?
CORMAN | I guess it’s safe to say that his mission and her mission intercept.

TVLINE | How has the dynamic between them changed? They’ve been through quite a lot together, so is it a little bit different when they meet up this time?
CORMAN | It is. When they first met, they didn’t trust one another at all. So if you look back on [the fifth episode of Season 1], they didn’t know even if they were enemies or not. But now there’s a little bit of a shorthand… It doesn’t mean it’s always going to be smooth sailing. What’s great is they do have different agendas. They do work for different spy services. So there’s always a bit of a comfort level, but also a tension between them. 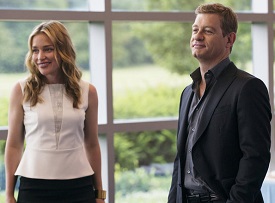 TVLINE | How is Annie dealing with what’s happened to Ryan and her growing feelings for him? How does that affect her in the premiere?
ORD | That’s impacting her greatly. Any time you’re going on a mission that is motivated through personal connection, it’s going to cloud your decisions and certainly make your life more straightforward, but also more challenging [because] you don’t want to get too emotional. You don’t want to let your emotions overcome you, and yet, you want to use those emotions to help guide you and help you achieve your mission. So it deepens her life greatly.

TVLINE | What role does Auggie play in Annie’s mission?
CORMAN | Well, it’s interesting. It becomes a intensely significant one. That will be revealed later in this back six. But Auggie and his backstory will play a very prominent role.