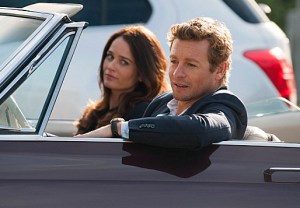 Surely Patrick Jane had to see this coming. CBS has announced that The Mentalist‘s seventh season will be its last, to premiere Sunday, Nov. 30 at 9:30ET/9 pm PT.

Patrick, Theresa et al will call Sunday home until Jan. 7, when they relocate to finish up their run in the Wednesdays-at-8 time slot. A two-hour series finale is set for Feb. 18.

* Undercover Boss will return with three Sunday episodes — opening the Eye’s line-up on Dec. 14, 21 and 28, while Madam Secretary is on holiday — before moving to the Friday lead-off spot on Jan. 2.

* Survivor‘s season finale (two hours plus a reunion show) will air Wednesday, Dec. 17, while The Amazing Race wraps its current run on Friday, Dec. 19. Survivor and Amazing Race kick off their spring cycles on Wednesday, Feb. 25, each with a 90-minute opener; Race then returns to its Fridays-at-8 time slot on Feb. 27.

* The Good Wife and Madam Secretary will air their fall finales on Nov. 23 and 30, respectively, then resume their seasons Jan. 4.