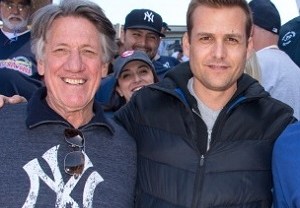 The USA Network drama will once again reunite Harvey with his “dad” when star Gabriel Macht’s real-life father, Stephen Macht, returns to the series as Harvard Law professor Gerard, per The Hollywood Reporter.

The actor will appear in two of Season 4’s back six episodes.

* Arrested Development is coming back with fresh laughs! (It’ll all make sense when you read Ron Howard’s caption below.)

* Dancing With the Stars will hit the road for a live tour, kicking off Dec. 27 in Niagara Falls, NY. The first two dancers announced to participate are Mark Ballas and Witney Carson. More information can be found at http://www.dwtstour.com

* Rosie O’Donnell will reprise her role on The Fosters as Callie’s Girls United mentor Rita Hendricks. The View co-host will appear in two episodes of Season 2, airing in early 2015.

* The Soul Man has tapped Bill Martin and Mike Schiff (Grounded for Life) as its new showrunners for Season 4, which will also welcome back Sherri Shepherd in a recurring role as Boyce Ballentine’s unpredictable cousin, Nikki.

* Discovery Life Channel has begun production on the docu-series Those Girls, about a group of transgender friends living in Kansas City, Mo.