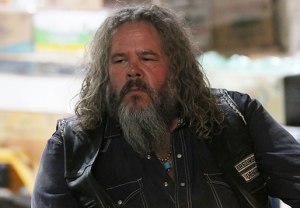 Warning: If you have yet to watch Tuesday’s episode of Sons of Anarchy, get thee to a different TVLine article. Everyone else, read on…

Yet another Sons of Anarchy member bit the dust in Tuesday’s episode — and boy, did this one sting.

During a tense exchange with August Marks, which should have resolved the gangster’s conflict with SAMCRO, Bobby was suddenly offed via a gunshot to the head. What resulted was Season 7’s most somber moment yet for Jax and the boys, an extra dash of guilt for Gemma and a retaliation from SAMCRO that is sure to bring a few more casualties before series’ end.

TVLine chatted with Mark Boone Junior — the man behind Bobby Munson — about Tuesday’s shocking death, his reaction to Bobby’s demise and his all-time favorite Sons scene.

TVLINE | Right before Bobby gets killed, it seems like the trade with August Marks is actually going to go smoothly. Were you surprised by Marks’ last-minute murder?
I’ve gotten into a very regular habit, after doing this show for seven years, of not trying to predict what’s going to happen. When I read that I was getting shot at that moment, it didn’t surprise me at all. But that doesn’t mean it didn’t affect me! [Laughs]

TVLINE | Bobby was resilient right until the very end. Do you think he would have preferred to die, or would he rather have lived without an eye and a few fingers?
Come on, who needs two eyes and two hands? I had a good chunk of my hand. They didn’t take my thumb, and that’s all you need. There’s a lot of prosthetics these days. In fact, you can probably get a fake eye these days that works pretty well. Bobby would’ve preferred to be alive, yes. [Laughs] I am very sure that Bobby would have preferred to be alive.

TVLINE | Gemma seemed especially shocked by Bobby’s death, which we know leads back to her initial lie. Do you think Gemma is responsible for Bobby dying?
Gemma is responsible for the whole deal, yes! [Laughs] This is all on Gemma, every bit of it. That’s what the whole season is about, every time there’s a casualty. It’s definitely been seeping in there before Bobby’s death, but it really comes home to roost then. Bobby was the last vestige of the old club. Tig isn’t really, nor is Chibs. Bobby’s it. He wasn’t part of the original nine, but he came very soon after. 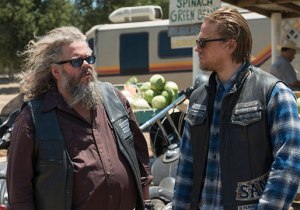 TVLINE | Are you looking forward to seeing Gemma get her comeuppance?
Gemma’s like a mythological monster. There’s no woman that’s ever existed in the history of motorcycle clubs like her. Will the dragon be slayed? I don’t know.

TVLINE | Was it emotional to film that final scene with Charlie Hunnam?
Yeah. Yep. [Sighs] Charlie and I have been through a lot. That was pretty rough.

TVLINE | Who had a more difficult time during that scene?
I’d say it was rougher for him, but it may have been easier for him because then he could just plant it into whatever he was doing. And I had to just lay there like an idiot. Tommy Flanagan and Charlie have that scene they play over the blood and the sand. It’s a pretty good scene.

TVLINE | How about the series’ wrap party? Was that an emotional event, or was it a celebration?
They actually scheduled the wrap party two days in advance of the wrap party. And I had other commitments, so I could not attend the official wrap party. Which is horrible! [Laughs] A lot of people couldn’t go. But we had an unofficial wrap party with the boys and a lot of the crew. Since this is the last year, we’ve spent a lot of this season recalling old moments that we wanted to re-investigate. I don’t know if I’d call it reminiscing, but there was a lot of recalling of many, many, many things over the course of this whole season. By the time I left, we had done a lot of that.

TVLINE | Is there a standout moment from the series that you recall most often?
There’s a scene between Charlie and I that happens at the table between us. I believe it was Season 4, and we’re talking about why Clay couldn’t be killed. Jax wants to kill him. In fact, Bobby wants to kill him, too, but according to the laws of the club, he felt it wasn’t appropriate. And that scene was one of my favorite scenes that I did. In general, it’s the camaraderie that we’ve established between us as club members. And that spread out, too. Maggie [Siff] was definitely part of that, and that’s the thing that will stay with me through my whole life.

Were you shocked by Bobby’s death? How do you think the rest of the season will play out? Sound off in the comments. 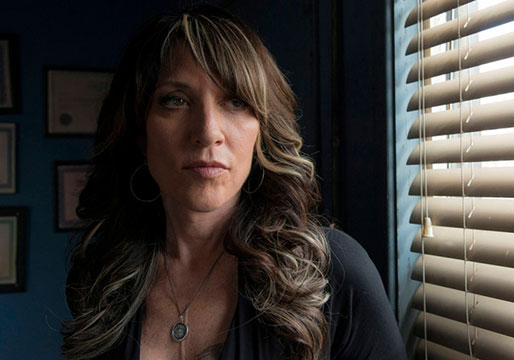