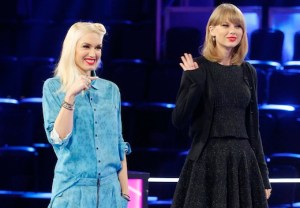 It was the best of mentors, it was the worst of injustices for The Voice‘s final set of Season 7 Knockout Rounds.

On one hand: Can we get a “hip-hip hurrah!” to celebrate the keen insight and serious commitment displayed by megastar Taylor Swift as the Knockouts mentor for all four teams? You might want to shake, shake, shake the sound of her latest, crazy-ubiquitous hit single from your eardrums, but you’ve got to admit a future Voice cycle anchored by her and Pharrell Williams might be the only way Blake Shelton will ever get to take a season off.

On the flip side, what did Rebekah Samarin do to the show’s producers to get relegated to the dreaded montage treatments for the Blind Auditions, the Battle Rounds and the Knockouts? One wonders if she secretly replaced the contents of Blake’s “special cup” with Folgers Crystals, or perhaps wrote a series of scathing Amazon reviews for Touched by an Angel — the mid-90s family-friendly hit starring Mark Burnett’s wife, Roma Downey.

I know it’s a little quaint of me to cry “it’s not fair!” over the behind-the-scenes machinations at a reality singing competition, but seeing how Rebekah clearly had enough talent to advance this deep into the Season 7 proceedings, you’d think at least one of her performances could’ve been shown in full (and in favor of one of the umpteen “this is what you just missed before the break”/”here, let us spoil exactly what’ll go down after the break” teases.)

Would this be an inappropriate place to bastardize the old Edmund Burke adage: “The only thing necessary for the triumph of evil is for recappers to say nothing”? 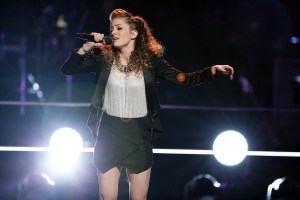 Actually, don’t answer that. Instead, let’s get to the business of ranking tonight’s Knockouts from least- to most-promising winner:

6. TEAM GWEN: Ryan Sill (“Miss Independent” by Ne-Yo) defeats Beth Spangler (“Too Little Too Late” by JoJo) | Pharrell hit the nail on the head: Somehow, Ryan needs to discover the emotion of his lyrics, while Beth needs to realize she’s more twang-pop than R&B. But in a battle of iffy performances, I can’t blame Gwen for leaning toward the contestant who best incorporated the mentor-session advice.

5. TEAM ADAM: Matt McAndrew (“Drops of Jupiter” by Train) defeats Rebekah Samarin (“You Give Me Something” by James Morrison) [Shown in montage, with only Matt allowed to sing.] | Matt sounded pretty solid on an extended snippet of “Drops of Jupiter” — even if his quavery tone still hits my ear like a popcorn kernel in a tooth — but without a single note of Rebekah’s performance as a comparison, the overall experience was fairly infuriating.

4. TEAM ADAM: Chris Jamison (“[Sittin on] the Dock of the Bay” by Otis Redding) defeats Blessing Offor (“Your Body Is a Wonderland” by John Mayer) | Chris needs to be careful not to overestimate the power and precision of his falsetto — Justin Timberlake, he is not — but he showcased a terrific lower register and a smooth sense of rhythm on a soul classic that was a lot less shocking than Adam kept indicating. By comparison, Blessing’s Muzak-ization of John Mayer’s ode to one female’s form, felt sexless and labored. I mean, when you’ve got to implore the audience, “You can clap louder if you want,” it’s pretty clear the other guy’s got it in the bag.

3. TEAM BLAKE: Reagan James (“Hit ‘Em Up Style” by Blu Cantrell) defeats Grant Ganzer (“Apologize” by One Republic) | As a veteran American Idol watcher, I flinched a little at Reagan’s choice of a super-tricky R&B jam that has killed the competitive dreams of many Hollywood Week performers. Imagine my surprise, then, when she handled the rapid-fire lyrics and swooping high notes with the ease of a raptor picking off a chipmunk. Plus, as Pharrell noted, her outsized swagger is beyond her years — even if, as Gwen hinted, her baggy genie pants and “secretarial pool gone wild” blouse were also a combo you’d expect to see on someone 20 years older. [Side note: Gwen’s suggestion that Reagan wear sweatpants for her next performance, however, landed as close to Coach-on-Coach sabotage as anything we’ve seen since Christina dumped verbal pig’s blood on Adam’s guy Tony Lucca in Season 2.)

2. TEAM GWEN: Anita Antoinette (“Rude” by Magic) Vs. Craig Wayne Boyd (“Can’t You See” by Marshall Tucker Band) — Craig stolen by Blake | Best steal of the Knockouts, bar none, since it would’ve been an unspeakable crime if either Anita or Craig got eliminated at the exact moment they proved they had a chance to win the entire competition. Indeed, Anita brought real funk and charisma to her reggae anthem — while bringing to vivid life the lyrics about a suitor getting shut down by a future in-law in the quest to put a ring on it. Craig, meanwhile, the recipient of the most necessary makeover in Voice history, delivered “Can’t You See” with more religious-level fervor than Adam’s got tattoos — making us feel the desperation of a man who’s got to get out of a bad romance. Sure, Blake stealing him back wasn’t a big shocker — but the real twist might be that suddenly Craig’s looking more viable than James David Carter, the man who beat him in Battles, no?

1. TEAM PHARRELL: Jean Kelley (“Chandelier” by Sia) defeats Menlik Zergabachew (“Could You be Loved” by Bob Marley) | Don’t get me wrong, Menlik brought above-average grooviness and a gruff, gorgeous tone to his Bob Marley cover — even though his “I dropped out of high school for this” story arc continues to vex me. But as Taylor herself noted from the first few notes of Jean’s rehearsal, the underdog vocalist’s aching, piano-driven twist on Sia’s massive hit was downright revelatory. When the coaches began using less-than-superlative words to weigh in on Jean’s exquisite effort – Gwen muttered about a “weird mixture of styles” while Blake actually declared himself Team Menlik — I stood up and prepared to hurl my flat screen out the window. Thankfully, the commercial and artistic sides of Pharrell’s brain proved themselves to be in good working order, though, and he handed the win to the women whose knees buckled from the weight of the words she was singing. (And no, no electronic equipment was harmed in the production of this recap. Whew.)

On that note, it’s your turn. What did you think of Season 7’s final set of Knockout Rounds? What the heck does the show have against Rebekah Samarin? Take our poll below, then sound off in the comments!