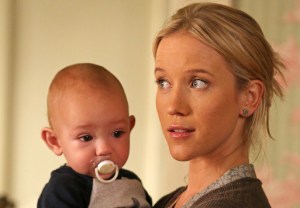 The world’s best group playdate takes place this Sunday on ABC’s Once Upon a Time, attended as it is by Snow White, Cinderella (returning guest star Jessy Schram) and Sleeping Beauty (Sarah Bolger), each with their bambinos in tow.

Also amid the fresh batch of pics shared below: a bit more angst for poor Regina and Robin Hood, and a peek at Snow Queen’s flashback origin story.

In the episode “The Snow Queen,” Emma interrogates Ingrid at the sheriff’s station, only to be subject to the sorceress’ mind games; Regina and Robin’s relationship grows increasingly complex as they struggle to find a way to save Marian’s life; and Emma is reminded of what she missed out on by not being a family with Snow and Charming, when she sees how involved Mary Margaret is in baby Neal’s life.