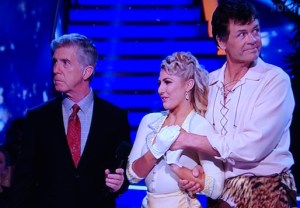 With no clear Mirrorball frontrunner yet in sight, Week 8 of Dancing With the Stars featured the final seven couples hitting the ballroom floor as famous “Dynamic Duos” — think dancing versions of Romeo and Juliet, Tarzan and Jane, Lucy and Ricky, etc. — before we braced for the latest shocking (or inevitable?) elimination.

But wait, tonight’s live show also showcased the return of the nerve-wracking “Immunity Challenge,” which saw the night’s top scorer get freed from the possibility of elimination, while the rest competed in an all-or-nothing dance-off for crucial extra judges’ points.

DANCE OF THE NIGHT: Janel Parrish and pro Val Chmerkovskiy | This passion-infused, luscious, Romeo and Juliet-themed contemporary piece dazzled the ballroom and the judges. Bruno Tonioli was eloquently impressed, calling the performance, “Extremely ambitious, yet gorgeous and glorious in every possible way.” Len Goodman simply gushed, “I knew you were a good dancer, but tonight you’ve shown me that you’re a great dancer,” while Julianne Hough perhaps said it best in just a single word: “Breathtaking.” Nothing but 10s here, people!

RUNNER-UP DANCE OF THE NIGHT: Alfonso Ribeiro and pro Witney Carson | Holy cha cha, Batman! Alfonso’s highly entertaining, energy-infused performance KA-POW!’d the judges, as Julianne called it “pure entertainment… I wanted to dance with you on that floor!” while Bruno could barely contain himself: “You’ve got to be the hottest Robin I’ve ever, ever, ever seen,” he said of Witney. The dance earned a pair of perfect 10s and a couple of 9s from Julianne and Len.

MOST CRIMINALLY UNDERSCORED: The judges were really on their game tonight. Was even one paddle noticeably out of line?

WORST OF THE NIGHT: Michael Waltrip and pro Emma Slater | Who else, right? The judges may have mellowed their most biting criticisms this week, but lead-footed Michael’s feeble foxtrot was lucky to generate a very generous string of 6s (and a 7 from the suddenly kind-hearted Len!). “You lost your footing, you nearly fell on your butt,” said a matter-of-fact Bruno, who echoed the panel by acknowledging it was “better than last week.”

On to the results…

“It was a chance to do something that was more emotional than it was physical,” said a gracious and surprisingly moved Michael of his DWTS journey, before offering a special thank you to the cast and especially to Emma. “I’m happy that I got to be here, and I’m sad I have to go.”