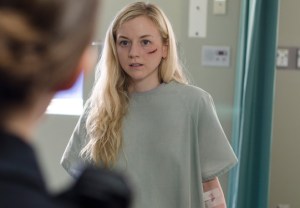 On second thought, keep reading. We’ll get to the end of “Slabtown” — and who’s in it! — when we get to it.

BACK IN THE ATL | As the hour began, Beth awoke at Grady Memorial Hospital in Atlanta with stitches on her cheek and her hand in a cast. Shortly thereafter, police officer Dawn Lerner and Dr. Steven Edwards entered her room and explained that she had been rescued from a walker “rotter” attack. “So you owe us,” the cop added ominously. Beth immediately asked about Daryl but was told that, when she was picked up, she had been alone.

Next, we flashed forward a bit, and Beth appeared to be working off her “debt” as a nurse/orderly. Not only did she help Steven chuck an ill-fated patient down an elevator shaft (at the bottom of which walkers would dispose of at least some of the remains), she assisted in a procedure to stabilize a new patient named Trevitt (in whose survival Dawn was so very interested, she bitch-slapped our heroine to motivate the doctor).

SLEAZY DOES IT | Making matters worse, it turned out that there was something creepier inside the hospital than outside it: Dawn’s officers. One in particular — Gorman — seemed to have difficulty refraining from adding “nudge, nudge, wink, wink” to his request that Beth show some, ahem, appreciation for her rescue.

At least Steven seemed nice. He shared his lunch with Beth (guinea pig), treasured his Caravaggio painting and expressed a longing for a world in which they got to be better than the animals they’d become. (Anyone else get the impression that he would have hit it off fantastically with Milton?)

FRIENDS IN LOW PLACES | When Beth went to change the blouse that she’d bloodied while helping save Trevitt — Dawn likes things neat, Steven noted — she discovered a lollipop in her pocket, a gift from fellow orderly type Noah (Tyler James Williams, who is so innately lovable, it makes me fear for his longevity). But they had scarcely a moment to bond before another aide/prisoner named Joan was dragged in with a walker bite and forcibly given a life-saving arm-ectomy. Why was she so willing to die? We would soon find out…

First, however, Beth thanked Noah for the lollipop and asked him why Joan would risk her neck trying to escape when she could just work off her debt and go. Noah — clearly hip to the joint’s sketchiness — said that he had never seen it work that way, and he’d been there a year. What’s more, he seemed to think that Dawn and Co. had rescued him — and refused to rescue his bigger, stronger father — because the older man would have fought back (and, with his muscle, he might’ve won).

SUCKER PUNCH | Later, Dawn gave Beth what was probably supposed to be a pep talk, and Joan bitterly revealed to the newbie that she could understand how the cop does the evil things that she does. “I guess it’s easy making a deal with the devil,” the now-one-armed girl said, “when you’re not the one paying the price.”

Off this enigmatic chat, Beth went looking for her lollipop, only to find that Gorman was already enjoying it. Grosser still, he was determined to share it, forcing it into her mouth and then… Well, you can imagine what he would have done then, had Steven not interrupted.

Horrified to realize what a complete and total cesspool they were in, Beth asked the doc why on earth he stayed. And, though he told her the whole sad tale of Dawn’s predecessor, Hansen, and the costly mistakes he’d made, the short answer was, as bad as being inside the hospital is, it’s still better than being outside it. (Debatable.)

MAKE OR BREAK | Before clocking out for the day (from hell), Beth followed Steven’s orders and gave Trevitt an injection… which, to her surprise, killed him. To spare her Dawn’s wrath, Noah lied that he was to blame and, even though the cop knew he was just protecting his gal pal, got beaten to a pulp. WTF? Beth asked. In response, Dawn blathered on about how “every sacrifice we make has to be for the greater good,” for when they’re rescued and begin rebuilding the world. That’s why she’s cool with Noah being pummeled and Gorman forcing himself on Joan. The girls around the hospital “keep my officers happy,” she said. “The happier my officers are, the harder they work to keep us going.”

The next day, Beth and Noah did what anyone with half a brain would and decided to beat a hasty retreat. The plan: He’d keep an eye on Dawn while Beth snuck into the cop’s office and stole the key to the elevator. And it was going great, even after Beth discovered Joan dead on the floor (having reopened her wound with a pair off scissors so as to bleed out). But then — dun-dun-DUN — Gorman came in. Luckily, Beth convinced him that she was willing to play nice long enough to clock him with a jar of lollipops and feed him to the reanimated Joan.

After that, it was relatively smooth sailing for the duo — relative to other escapes on this show, that is — until they made it outside. Noah was able to elude the walkers and squeeze through a gate to freedom, but Beth… crap! She was apprehended by the guards. Yet, dire as her situation was, she was still so happy that at least her friend got away that she wore a defiant smile.

BEHIND ENEMY LINES | Back inside the prison hospital, Beth lashed out at Dawn and told her, “Nobody’s comin’! We’re all gonna die, and you let this [abuse] happen for nothin’!” As is the cop’s habit, she responded by striking Beth. (It didn’t seem to improve Dawn’s mood any that the glass of her framed photo of herself with Hansen had gotten broken along the way.)

Just as bad (worse?), no longer could Beth take any comfort in Steven’s company. When she accused him of setting her up to unwittingly kill Trevitt because he somehow knew the patient was a doctor, he admitted it. If they had another M.D. around, “they would have kicked me out,” he argued. He had no choice.

Unimpressed, Beth appeared to have made a choice herself — to kill Steven with a pair of scissors — when she was distracted by a new patient being wheeled in. A new patient with a familiar face — Carol!

OK, your turn. What did you think of the episode? Were you surprised to see Carol at the end? Hit the comments!