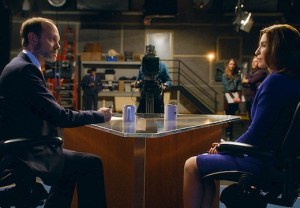 As TV viewers, there’s a certain success threshold we expect from our network drama protagonists. They can lose the occasional case, suffer the intermittent personal setback, but they’re supposed to follow the Chumbawamba-approved adage: “I get knocked down, but I get up again. You’re never gonna keep me down.”

In the twisty, twisted world of The Good Wife, however, regular small-screen rules do not necessarily apply. Dashing young attorneys can have their lives cut short in acts of senseless violence. Upstanding, tech-savvy teenagers can usher their pretty girlfriends to clandestine abortion appointments. Elections get rigged, friendships get permanently fractured and true love is allowed to wither like a petunia after a November frost — with no amount of unrequited elevator-proximity putting Humpty Dumpty’s heart back together again.

Which is precisely why, as I watched this week’s installment of CBS’ superlative legal drama, my brain dusted off a couple of truly troublesome questions: What if Alicia winds up getting trounced in her race for State’s Attorney, her hard-won reputation buried beneath a bag of festering Chinese food in the back-alley Dumpster? And what if Cary can’t outmaneuver current S.A. James Castro’s vendetta against him, if he finishes Season 6 in a crossover episode with America’s Hardest Prisons? I’m not sure if bad news for these characters would be bad news for viewers, but I’ll probably be tossing and turning into the wee Monday hours pondering it.

It’s not out of the realm of possibility. And the developments in “Message Discipline” (the title of Season 6, Episode 7) reinforced the nagging undercurrent of uncertainty. Let’s recap the action and the main questions raised:

TV FAME TRUMPS POLITICAL FAME? | As Peter sits down for a tougher-than-expected interview with political commentator Frank Prady (David Hyde Pierce), Eli notices a prominent campaign operative in the wings — and he’s not the kind of guy who goes anywhere “without good reason.” Turns out Prady’s circling the State’s Attorney’s race, too, and since he’s a “bigger brand” than the First Lady of Illinois, that could spell trouble for Saint Alicia. Johnny and Eli set up a meeting in which Alicia can seek Prady’s endorsement, but all of her advisers’ suggestions strike her as uncomfortably unsubtle. “Alicia, you’re not writing a poem – you’re practicing politics!” barks Eli, beautifully exasperated. The poem Alicia winds up writing, though, might as well be titled “Portrait of a Candidate With a Foot in Her Mouth,” as her efforts to butter up Prady via tougher policy on crimes against the elderly go awry. Turns out reports of his mother’s mugging weren’t accurate; the victim was another woman from her assisted-living facility. “I believe it… the elderly crime… thing,” Alicia mutters in the most unconvincing fashion possible.

No surprise, Alicia fails to secure an endorsement, but she does snag an interview slot on Prady’s show. Johnny preps the candidate by telling her not to cross her legs under the table (the better for her posture) and by informing her that “questions are for dopes” (in other words, always stay on message, no matter what the dude asks you). When he floats a trial question about Zach’s girlfriend’s secret abortion, though, Alicia channels her inner Khaleesi and gives birth to a fire-breathing dragon. “HOW DARE YOU?” she rages. “ARE YOU FREAKING KIDDING ME?” Johnny approves the message — if she takes out the “freaking” and reins in her hand gestures. It’s a priceless dance lesson, really, with Alicia learning that every move — no matter how off-the-cuff or personal — must be carefully rehearsed. Unfortunately for her, Johnny’s prepped her for a hard-hitting Q&A, so when Prady shows up on live TV with condescending softballs like, “Where do you find the time?,” Alicia does her best impression of a robot in a swimming pool, going CTRL+ALT+DEL in front of the ominous cameras. (Brilliant direction and editing in that scene, no?) “OK, I’m going to get drunk,” Alicia groans to Eli as she heads for the exit — forgetting that there’s no such thing as irony (or humor) for political candidates.

Despite the blow to her candidacy, Alicia refuses to let Eli and Johnny use a potentially damaging law-review article that Prady wrote long ago condemning Israeli settlements, and so they take the next obvious step: Leaking it to Castro and letting him do the dirty work. Prady shows up at Alicia’s office, dejected over losing friends and disgusted over how “human beings are treated like commodities” in the current political environment — and he seems to have her sympathy. But when the talking head suddenly gets sanctimonious and blames Alicia for the leak, claims it’s convinced him to quit his job and run against her, she bristles. “You’re such a hypocrite!” He’s not trying to change the system, she huffs, he is the system — and he’d been planning to run for weeks, even when during their uncomfortable interview.

“Yep,” she replies. “It was fun. See you out there.” If this isn’t the physical and verbal embodiment of “no love lost,” I’m not sure what is. But since Alicia is always at her most delicious when faced with a formidable rival, the more the merrier, I say!

PUTTING THE ‘CARY’ IN SCARY | With 58 days ’til trial, Finn starts sniffing around a leave of absence Cary took during his tenure as an ADA, and — welcome back, Geneva! — eventually learns Mr. Agos was involved in a swept-under-the-rug incident where drugs connected to Lemond Bishop went missing after he brought them from lockup to the crime lab. Finn drops vague warnings to Alicia (over drinks, naturally) that another wicked wind is headed toward Florrick-Agos HQ, then drops the bombshell in court that he wants “proof of other crimes” introduced into the trial.

It’s Kalinda to the rescue when she figures out Cary was working under Peter’s direct orders — and is keeping his mouth shut to protect the governor. When Cary says he can’t come clean, Kalinda traces the source of the troubles to the lab tech — who just so happened to get a $30,000 deposit in her account for misplacing the evidence, who also happens to be the cousin of Bishop’s MIA crew member Trey Wagner, and whose hijacked GPS info leads the boot-loving investigator to Trey’s hideout in Gary, Indiana. He agrees — with the blessing of his deeply religious family — to work with Finn and testify against Bishop, but guess what? Castro doesn’t want to cut out the middle-man in their case (Cary) — even though Trey claims he helped set Cary up. “You don’t care about Bishop. You care about Alicia Florrick,” Finn marvels at the Weaseliest Weasel to Ever Have Weaseled. And next thing we know, he’s resigned from his ASA position and is back out at the bar with Our Lady of Straight Bourbon (aka St. Alicia). When Finn says he can’t legally discuss his exact reasons for quitting, Alicia counters with this innnnteresting jab: “You will tell me more after three drinks!” The episode ends with more sobering news, however: Wagner and his relative — the only two folks who can clear Cary’s name — have died in a car accident. Is it possible Bishop learned of their intentions? (Most likely.) And is it possible Bishop learned from… Castro? (Perhaps. It seems like dude would do anything to win.)

Oh, and one last note: Cary and Kalinda flirtatiously texting with each other and exchanging lusty looks? In court? Within eyeshot of the judge who could revoke his bail until trial? I realize these two cats occasionally seek out danger in the alley, but I’m not sure I buy that either one would risk so much for so little payoff so soon after the whole “50 feet of separation”/”ankle monitor ruling.” Anyone else with me on that count? 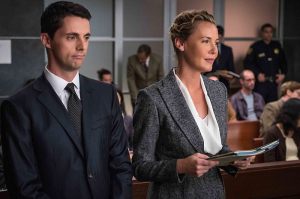 ALICIA 2.0 | When Peter finds himself blindsided about current case law during his interview with Prady, he tells Eli to assemble a list of personal attorneys from which he can hire a new staffer — oh, and he wants “family friend” Ramona Lydden (mom of the infamous, panty-less intern) to be included. Ramona bumps into Alicia while she’s waiting for her interview, as it turns out, and we learn that she’s recently divorced, returning to the work force after raising her children, and is essentially modeling her career comeback after Alicia’s. (The question looms, though, does Ramona also share Alicia’s taste in sexy governors? Yes, yes, it’s dreadful of me to speculate so quickly, but we know Peter’s weaknesses, and we saw the private laughs he and Ramona shared when Eli walked in on ’em a few weeks back, so… Your objection is not sustained!) For now, Ramona proves a quick study in her new job: When Diane makes the case that Cary expedited the cocaine evidence under orders from his then-boss Peter, Ramona shrewedly advises the now-Governor that “They want it to look like you’re covering something up — so don’t” and adds that Peter shouldn’t reach out and speak to Cary — lest it get used against him. Her argument holds up in court, impressing Finn, but methinks Eli will take a little more winning-over.

OK, your turn. What did you think of “Message Discipline”? How worried should we be for Cary? And what to make of Alicia going out for drinks with Finn with such increasing frequency? Sound off in the comments!