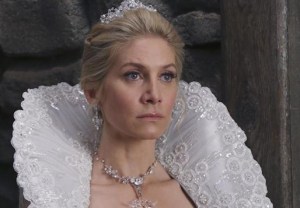 This week on ABC’s Once Upon a Time, the Snow Queen’s “attachment” to Emma was revealed, while in flashback we discovered Belle’s connection to Anna’s disappearance.

IN THE FAIRYTALE LAND THAT WAS…. | We see that with the Ogre Wars heating up, during one attack Belle and her mother hid beneath a table, yet were quickly discovered. What happened next is a blur, since once Belle next wakes, her mother is dead and being memorialized. Belle’s father suggests her memory loss is for the best, but that’s not good enough for the plucky bookworm, who has read of creatures in Arendelle who can help her fill in the blanks. Meanwhile in Arendelle, Elsa welcomes Anna back from her trip to the Enchanted forest, but Anna keeps mum on what she learned about their parents’ journey. Anna is introduced to the aunt she never knew, Ingrid (aka the Snow Queen), and immediately senses something is fishy. Anna goes to seek out Pabbie, and along the way meets Belle at Oaken’s Trading Post & Sauna. Anna leads Belle to the rock trolls, and Pabbie turns Belle’s missing memories into a stone which she is to brew with tea and drink. Then in private with Anna, Pabbie shares that her mother Gerta did have two sisters, Ingrid and Helga, but when they both tragically vanished, Pabbie erased the entire kingdom’s memories of them. Racing back to Arendelle to alert Elsa, Anna slips, and Belle is forced to choose between helping her or retrieving her dropped memory stone. Belle chooses the latter only to knock it over the cliff and see it shatter. And by the time she reaches for Anna, it’s too late — her new gal pal tumbles to the ground below, unconscious, where the Snow Queen finds her… and the sorcerer’s box she finagled from Rumple. Snow Queen vanishes with Anna, and all Belle can do is watch helplessly from high above.

Upon returning home, Belle’s father shares with her the truth about how her mother stood between her and the ogre, ultimately sacrificing her life as a hero. And with the Ogre War bearing down fast upon them, Belle aims to seek out the powerful wizard Anna told her about — Rumplestiltskin — regardless of what price is attached to his magic. Meanwhile, Anna is revealed to be held in a cage by Snow Queen, who plans to convince Elsa that her sister was to use the Sorcerer’s Hat on her. Snow Queen is mum on whatever happened to Helga, but says all she wants is a family that embraces her — and with Anna now “the odd woman out,” she’ll have to find someone to take her place!

IN STORYBROOKE…. | After Emma shows everyone the videotape of the Snow Queen as her foster mother, the gang spreads out across town to track down their adversary’s ice cream truck. (Along the way, Robin Hood confronts Regina about avoiding him. She admits that she has proven unable to find a fix for Marian — so his only hope may be to forget about Regina and fall back in love with his wife and do the True Love’s Kiss thing.) Once the truck is found, Emma discovers inside it files about her, dating back to when she first arrived in this realm as a newborn. Meanwhile at the library, Elsa frets that Anna doesn’t want to be found, that maybe the Snow Queen was right and Anna did trap her sis in the urn. Belle is obviously bothered by a secret she is keeping, so she goes to the pawn shop to compel Rumple to take her to the Snow Queen, using the fake dagger. Despite having just had a nasty, 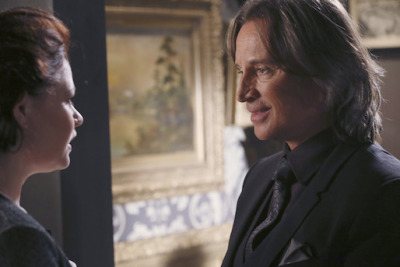 private run-in with the Snow Queen — during which she boasted of having “leverage” that he didn’t — Rumple plays along. Belle’s plan is to get the Sorcerer’s Hat from the Snow Queen (by, what, asking nicely?!) and then using it to force her to reveal Anna’s whereabouts.

Having “compelled” Rumple to stand guard, Belle enters the cave and uncovers the queen’s mirror, in the reflection of which she finds a feisty, taunting version of herself. Mean Belle reminds her kinder self of how she chose the memory stone over Anna and suggests that the Dark One only wed her because she’s easily manipulated. When Belle brings up the dagger, Mean Belle laughs and laughs: “You believe that’s real?” When Rumple runs inside to warn Belle of the Snow Queen nearing, Belle lashes out, nicking him with the dagger. Rumple whisks them to his shop, where Belle admits that she is the reason Anna is missing. She laments using the dagger on her true love, and questions her worthiness to be his wife. After Rumple soothes Belle, he confronts the Snow Queen, warning her not to act against anyone he cares about. Oh, and by the way, Dearie, he does have leverage — in the form of the Sorcerer’s Hat.

Back at the sheriff’s office, Elsa reveals her family heraldry, which shows the Snow Queen aka Inrgid to be her aunt — while the third “missing” sister is a ringer for Emma. What’s more, the Runic scrolls they found reveal a prophecy, that the Savior/Emma shall become Ingrid’s sister. Belle then runs in to ‘fess up about her role in the Snow Queen’s abduction of Anna, then relays critical intel on the ice cave mirror: how it will turn everyone in Storybrooke against each other, leaving only the Snow Queen and her new family — Elsa and Emma — standing!

NOTABLE QUOTABLES | “It’s bad enough I’m stuck with you and Captain Guyliner making eyes at each other”…. “Believe it or not, I was once a child.” “Yeah, like a million years ago.” “It was more like 200″…. “Spend a little more time in this town, love, and you’ll realize just about everyone is related.”

What did you think of the episode “Family Business”?