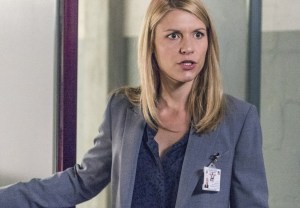 On this week’s Homeland, Carrie’s controversial plan to track down and murder Public Enemy No. 1 Haissam Haqqani via her sex pawn Aayan gets fast-tracked, while Saul’s fate following last week’s abduction is revealed. Let’s review the finer points of the riveting, “From A to B and Back Again,” shall we?

THEY’RE THE NEW COACH AND TAMI TAYLOR | The episode opens with Aayan and Carrie enjoying a laid-back morning in bed like some old married couple. They’re AM shmoopiness includes innocent giggling, knowing glances, shoulder smooches and… presents! Carrie gifts her young lover with a fresh passport, a big wad of cash and — as she has been promising him — clear passage to London. “We leave tonight,” Carrie informs the poor, clueless terrorist mule. “Every day here is just another chance to get caught. Or something to go wrong.” Translation: Carrie’s got a scheme up her sleeve! This much is confirmed when Carrie shows up at the embassy later that day and promptly asks Quinn to help her assemble “a small team” for a secret mission. But Quinn, still steaming from his recent Aayan-related row with his covert crush, is having none of her or her hush-hush operation. (The moment she informs him that her boy toy is involved, he zings, “So I guess clothing is optional?” Quinn FTW!) In no mood for an unrequited lovers quarrel, Carrie reluctantly turns to ex station chief Redmond for help.

THE PLOT THICKENS | Aayan returns to his dorm to retrieve some personal effects ahead of his great escape and has a run-in with his (stalker alert!) ex-girlfriend. In the span of mere minutes, the blabbermouth confesses to her that he’s a) fleeing to London, b) shagging Carrie and c) kinda-sorta loves Carrie, too. With the awkwardness quickly escalating, Aayan makes a hasty exit… only to quickly discover that he is being followed. (This kid cannot catch a freakin’ break!) He manages to lose the tail, but, when Carrie hears of this, she fears the damage is done. They need to push their departure back until things “cool off,” Carrie reasons. Aayan floats a tantalizing Plan B: He could ask his terrorist uncle Haqqani for help crossing the border, a suggestion that triggers a mini-orgasm in Carrie. Seconds later, their quiet little love nest is invaded by a small army of thugs. Aayan manages to escape, but Carrie is captured. And then comes the twist: Carrie orchestrated the violent break-in. That was the scheme she had up her sleeve! Now she sits back, watches (via the tracking device she had planted in his passport) and waits as Aayan leads them right to Haqqani.

WHACK A MOLE | Disgraced academic-turned-traitor Dennis follows Carrie’s glorified housekeeper Fara back to the now-abandoned safehouse to uncover some dirt for his ISI blackmailer Nasneem. He finds some discarded family photos of Aayan as well as proof that he’s “traveling,” and he relays this info to Nasneem. She quickly connects some dots and jumps into action. This worries me greatly.

THE L-WORD | Aayan phones Carrie while on the run to let her know that he had some time to think and he loves her. She responds (somewhat reluctantly considering all of her colleagues are eavesdropping) in kind. Ugh, this is not going to end well — for anyone. The following morning, Carrie and her fellow Scoobies look on via satellite as Aayan literally leads them right to Haqqani. If it all seems to neat and tidy, it’s probably because it’s all too neat and tidy. Just as Carrie orders the kill shot — which, she is told, would also take out Aayan — a mysterious figure emerges from Haqqani’s caravan. It’s Saul! If they kill Haqqani, they kill Saul too. Wait — it gets worse. Haqqani crushes his nephew’s heart by informing him that Carrie is actually with the CIA, and he’s been her little chess piece this whole time. And then he (ugh) shoots him in the head. Carrie gasps (if anyone’s gonna kill Aayan it’s gonna be her), Quinn utters an expletive and poor Aayan slumps to the ground. (Damn you, Dennis and your meddling!) A distraught Carrie then utters three chilling words: “Take the shot.” Yep,  she wants Haqqani dead so badly she’s willing to sacrifice Saul’s life to do it. Quinn attempts to intervene, reminding her that “It’s Saul.” But it’s all just white noise. “Take the shot God dammit — wipe that f—er out,” she roars. (That sound you hear is me adding another candle to my Claire Danes shrine.) Quinn ultimately knocks some sense into her, and she storms off, angry and defeated. To recap: Aayan’s dead, Saul’s officially a hostage, Haqqani remains at-large and Carrie’s back to square one.

SCENE WORTH REPLAYING | Carrie tearing into Fara for putting Aayan’s well-being ahead of “the collective f—ing effort to make our country safe.” Staggeringly well-written and featuring a knockout performance by Danes, the sequence illuminated the complicated central theme of the season: The War on Terror’s “innocent” victims. The best part — neither character was wrong.

What did you think of the episode? And the performances? And the twists? Hit the comments!