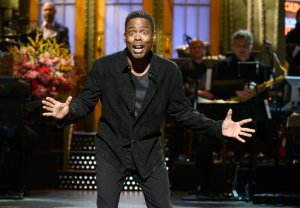 Comedy may be tragedy plus time, as the old saying goes — but you’d better be mighty sure your punch lines are on point if you’re going to try to mine laughs from the 2013 Boston Marathon bombings, fear of repeat terrorist attacks at One World Trade Center, the current Ebola outbreak and the growing threat of ISIS.

That was a hard-learned lesson during this week’s Saturday Night Live, which found host Chris Rock sputtering through a mostly dismal monologue and several bleak sketches — none of which rose to the heights of last week’s frothy, funny Jim Carrey installment. (At least we had Prince as a musical guest, though, right?)

Below, my picks for best and worst sketches. Check ’em out, then grade the episode in our poll and share your thoughts in the comments!

BEST: SWIFTAMINE
Finally, a pill that helps adults navigate the internal battle where “Your frontal lobe says, ‘Uff. Taylor Swift. She’s always, like, wearing a 1950s bathing suit.’ But your ears say, ‘Shut up this is a perfect song.'” Beck Bennett was flawless as infomercial narrator “Dr. David Doctor,” while Leslie Jones in the “Shake It Off” ballerina costume provided the perfect last-second upgrade.

BEST: HOW’S HE DOING?
Not the funniest-ever rendition of this recurring talk show in which African-Americans discuss Barack Obama’s presidency, but the extended riff on what the panel might do if Sasha and Malia publicly disrespected their father had me howling. Moral of the story: You can never go wrong with a Scandal reference.

WORST: OPENING MONOLOGUE
I’ll admit, I chuckled at the line about how economists annually come onto our TV sets and bemoan how horribly “Jesus’ birthday season” was. But seeing how standup is what Rock does best, the overall performance felt stunningly subpar. The lack of audience reaction spoke volumes about the host’s tepid jokes about women’s “ti–ies” bleeding during cold-weather races, the new WTC tower being sponsored by Target, and the inevitability of 9/11 sales becoming an effective future marketing tool.

What did you think of this week’s SNL? How would you rate Rock as a host? What was your favorite sketch? Take our poll below, then sound off in the comments!