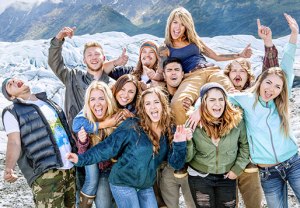 Following the premiere of MTV’s Slednecks (Thursday, 10/9c), Sarah Palin will be the last thing you associate with Wasilla, Alaska. From now on, it’ll be all about whale blubber, explosions and guys named Big Mike.

The network’s latest docuseries follows 11 thrill-seeking Alaskan friends — think Laguna Beach meets Buckwild meets Frozen — as they work, party and just plain survive in one of the country’s most remote locations. And even with the group’s over-the-top shenanigans, which range from taking shots of caribou blood to competing in an amateur go-go dancing contest, star Amber promises TVLine there won’t be any regrets from the cast.

“You live your life, you have a great time and you don’t look back,” she says of the gang’s philosophy. “When you’re in the moment, you’re just in the moment. Sometimes, though, you do look back and think, ‘OK, wow, I did that.'”

Premiering in the shadow of legendary MTV reality shows like Jersey Shore, Amber says she’s also prepared for the public to scrutinize her half to death.

TVLine also got our hands on an exclusive clip from the series, in which Sierra and Hali literally blow up a couch. This is just what they do:

Will you be checking out Slednecks tonight? Drop a comment with your initial thoughts below.