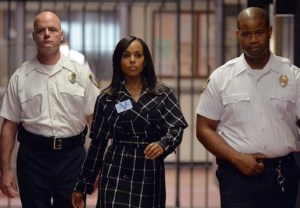 This Thursday on ABC’s Scandal, Olivia unleashed her fixing skills on two fronts — both on behalf of accused murderers — while Mellie learned an invaluable history lesson from an unlikely teacher.

Ronald Reagan never sat in the Scandal-verse’s White House, we learned this week. Rather, the 40th POTUS was named Cooper, and he has died of a stroke as the episode opens. We (and Fitz, nursing his bruised knuckles) get this news from Mellie, who’s back to looking like her usual self as she readies to plan the funeral and meet Coop’s Mrs., named Bitsy. Olivia meanwhile takes a meeting with Leonard Francis Carnahan (played by Private Practice‘s Brian Benben), the man who tried to assassinate Cooper 30 years ago but failed — and the bullet now in the dead president’s skull could (theoretically) exonerate him at last.

To secure said evidence, Olivia, Huck and Quinn need to rally D.C. to get Carnahan charged with murder (#JusticeForCooper), since Coop’s stroke was tangentially tied to the shooting. When they succeed, David files the charges yet loses his bid to keep the bullet in the deceased’s noggin. But as it turns out, the extracted bullet only proves that Carnahan did shoot the president, which was his plan all along. As he twistedly explains to Olivia, no one remembers failed assassins. But now, he can stand alongside the likes of John Wilkes Booth in history: “Thank you for making my life meaningful!” Yep, the fixer done got played.

Mellie’s side of the Cooper storyline is much lighter, as behind closed doors Bitsy (played by character actress Carol Locatell) drops her “simple folk” act and reveals herself to have been quite the puppet master during Coop’s administration, 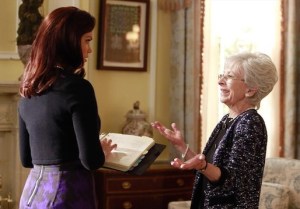 seeing as her husband was too distracted banging the homeliest secretary ever, twice a day. Bitsy used her time being unappreciated to get things done, including negotiating with the Soviets, though she is resigned to being remembered as “the wife of a man who did something in his life.” That sparks Mellie to seize a moment before the press to do RNC honcho Liz’s bidding and publicly deny a rumor of base closings, which had been gleaned by Michael from Cyrus’ email. Mellie’s prize for grabbing some gusto: sharing a joint with Bitsy on the Truman balcony. (Please tell me we’ll get to see Stoned Mellie. Please.)

Cyrus is none to happy to see the White House get painted into a corner regarding the base closings, but when he admonishes (G)Abby for not hunting down the hacker, she makes clear that she has found out a couple of things about what the Chief of Staff has been up to. So, maybe Cyrus should mind his own back door first.

Of course, the high drama this week was rooted in Jake’s fate. Rowan makes a case for the First Son’s killer to be handed over to B613, where they can do things the president cannot. (“Let me discipline my dog” he elegantly puts it.) Fitz, though, wants Jake to be publicly tried and punished. Olivia meanwhile just wants to know how he is, a case (G)Abby bravely makes right in the Oval Office: “I’m not asking the commander-in-chief. I’m asking the married man who used to sleep with my friend what exactly he has done with the man she currently is sleeping with….. If you love her, you’ll let her know.”

Fitz doesn’t care for (G)Abby’s tone — “She’s kind of a bitch,” he notes to Olivia, his choice of words not winning him any favors with a woman of substance — but it nonetheless sent him running to Liv, armed with “proof” of Jake’s plot. Olivia needs to see Jake for herself, a request that her father counsels the president to go along with. Once Liv is in the bunker, Jake wastes no breath pleading his case but instead lays out plans to get offshore money to his mother, after he is killed. “My word isn’t going to change anything. We both known in the end you’re not going to choose me,” he tells his lover. “And not choosing me is OK.”

Rowan’s endgame seems bound for success — Jake is poised to be transferred from the DOJ into B613’s hands, a fact Command is happy to gloat about. After boasting of how he played POTUS like a fiddle, he reminds his imprisoned, doomed, onetime agent, “You can’t take Command; Command Command takes you.” When Liv lashes out at Fitz for turning Jake over to her dad, of all people, Fitz reminds her of all that “Jake” did to her, to them. To that she says, “If you hand him over, we won’t ever have a chance.” Fitz chows down on that crumb, leading Liv to admit, “There’s hope” for them. As such, Fitz reverses his decision and advises Jake he’ll live out his days in a supermax prison, as his “gift to the woman we love.” Later, Rowan rails at his daughter, between laps, for intervening. She shrugs, “You may be Command, but I’ve got weapons at my disposal, weapons you can’t possibly possess.”

And I don’t think she is talking about drones.

Oh, and Quinn found the locker that goes with the key Caitlin had, and inside it was 100s of photos of Olivia. OK….

What did you think of “An Innocent Man”?