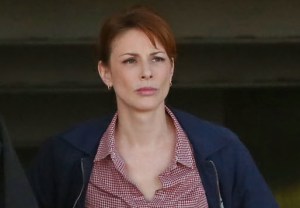 One of NCIS fans’ favorite recurring characters is bound for the Big Easy.

TVLine has learned exclusively that Diane Neal, on the heels of putting in her sixth appearance on NCIS earlier this month, next will guest-star as Agent Borin on the most-watched drama’s new spin-off, NCIS: New Orleans.

“The U.S. Coast Guard has a huge presence in New Orleans so to send CGIS Special Agent Abigail Borin down to help is an added bonus,” showrunner Gary Glasberg tells TVLine. “Diane Neal is a talented, fascinating, multi-layered actress and we’re thrilled to add her to the NOLA mix. Borin is a true member of the NCIS family and she’ll bring all kinds of fun to our New Orleans team.”

In addition to her recurring appearances on NCIS (the first of which aired in Season 7), Neal’s TV credits include Power, Suits and, of course, Law & Order: SVU.

NCIS: New Orleans airs Tuesdays at 9/8c, and has already earned a full-season pick-up. Neal will appear in Episode 12.