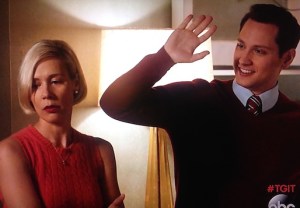 One minute, somebody’s leaving your high-five hanging; five weeks later, that same somebody’s got all 10 fingers (and then some) collating your legal briefs (so to speak).

Welcome to the crazy, killer world of How to Get Away With Murder, where not only do husbands’ penises wind up on dead girls’ phones, but where every paid member of Annalise Keating’s legal team seemingly gets his or her bonus checks in carnal currency. (OK, so Annalise herself hasn’t bedded any of the “Keating 5” just yet — but she sure looked open to the possibility while plunking herself down on Wes’ humble mattress and flatly asking, “What do you want?”)

Talk about a missed opportunity to play Robin Thicke’s “Blurred Lines”! I mean, what better soundtrack for Wes answering the door all damp and ripped and in nothing but a bath towel?

Sorry — my head’s all turned around. I mean, Wes’ portrayer Alfred Enoch was in Harry Potter and the Chamber of Secrets, and now he’s the guy who hid a drug dealer/possible murderer’s cell phone in the chamber below his grimy bathroom sink. It’s a lot to process, as were many of the big revelations from this week’s episode, “Freakin’ Whack-a-Mole.”

* Asher and Bonnie mix their (euphemism alert) cheese sticks and marinara sauce on the night of Sam’s murder. Yep, one minute Annalise’s blonde assistant — who gives Sam the cold shoulder this week when he thanks her for putting up with the Keating Family crazy — is groaning about having to take Asher along with her on a fact-finding mission, and then — in our flash forward to the night of Sam’s murder — she’s making him her bonfire-night booty call. Is she really into the douche-br0 with big muscles under his Oxfords, or is she merely establishing alibi. (After all, we see Bonnie call Asher only after the Keating Four have Sam’s body stuffed in their vehicle. We also see Asher — on his way to meet Bonnie — walking directly in front of the car with Connor, Laurel, Michaela, Wes and Sam’s dead body. And while he seems to be oblivious to the crime right to his left, would Shondaland really raise such a scene if there wasn’t a larger, juicier purpose?)

* Annalise, under pressure from an on-the-warpath Wes, assigns Frank with the dirty job of planting dead girl Lila’s cell phone — containing Sam’s disembodied penis pics — in the car of Lila’s boyfriend Griffin. Unfortunately for our protagonist, Annalise’s sometimes lover Nate has Frank’s illegal act caught on camera. What is Nate’s end-game? To destroy Annalise now that her skullduggery has cost him his job? To put Sam in prison and free up his illicit lover to be with him full time? To seek justice for murdered Lila? Some or all of the above? In some ways, it seems like Nate — operating outside everyone’s radar — might turn out to be the most (or one of the most) pivotal players in the Lila’s murder/Sam’s murder dance. 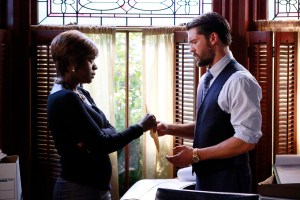 * After Frank illegally builds the case against Griffin (via planted cell phone), Rebecca returns from bail-skipping exile – but since she knows that Griffin was never in possession of the phone, and knows it’s Annalise’s hubby’s “winky” in the stored-photos file, she asks Wes a question he ought to be asking himself: “How are you OK with this?” Annalise, though, has a pretty good query of her own for The Law Student Frequently Known as “The Puppy”: How/why does Wes have such blind faith in Rebecca, a shifty neighbor whom he barely knows? I mean, she has big, bright, beautiful eyes, but those peepers didn’t make her incapable of choking out Lila and leaving her corpse in the sorority water tank, did it?

* During the case of the week, Asher suffers a brutal falling out with his wealthy federal judge dad — who got his plum appointment by ignoring perjured testimony against a death-row inmate. It’s a fairly standard “young black man takes the fall for murder of a pretty anti-gentrification crusader by entitled land developer-turned-state legislator” fare. But Annelise’s roaring, outraged monologue in front of the Pennsylvania Supreme Court — while unrealistically disrespectful of their authority — proves nevertheless riveting (and effective). Our protagonist’s fury against the suspicious state senator leads the panel of judges to — crazy quickly — find reasonable doubt in the 20-year-old case, and to promptly free Annalise’s client and overturn his conviction based on the questions she’s raised.

* Laurel, it turns out, is a rich girl — not the poor-but-scrappy social climber we’d been previously led to believe. At Bonnie’s insistence, she breaks off her flirtation with Frank — but Bonnie, lurking in the shadows as the split happens, reveals herself to be Mrs. Danvers-level creepy. Obviously, this is a temporary setback for the duo’s sexytimes — seeing how we’ve all witnessed those flash-forwards of Laurel with Frank’s shirtless selfie on her phone — but there are questions looming. Why has Laurel been hiding her privileged background? Is she really not that into Frank — or was she just giving Bonnie what she felt was an explanation that won’t derail her ambitions?

* Annalise turns on the tears at the end of the hour and tells Sam she needs him, needs him, needs him — and she loves him, too. But as she scathingly let slip last week, her cheating hubby likes his women broken and fragile — so maybe she’s just playing a role of distressed damsel to lure him back into her deadly web. I like that theory more than an Annalise who’s truly desperate to take back a serial cheater/possible homicidal maniac, so I will choose to believe it until proven otherwise. You? 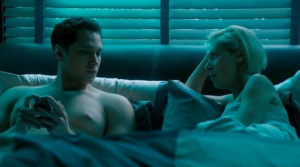 * Finally, the episode ends with Annalise calling Bonnie (in bed with Asher), desperately trying to figure out Sam’s whereabouts. Yep, the area rug in her office is missing, which causes her to gasp into the phone, “Something terrible’s happened!!!” But is it possible one of these women — Annalise or Bonnie — might be to blame? They’re mutually exclusive — but scintillating — theories, no?

QUOTES OF THE WEEK
“I’m like the most grown-up grownup ever compared to you dumb-asses!”
Asher, furious when the rest of the Keating Five refuses to let him into Annalise’s office the night of Sam’s murder

“When I filed the petition, I didn’t know you were screwing some white whore!”
Annalise, incredulous when Sam asks her why she’s fighting David Allen’s case when he’s trying to avoid suspicion in Lila’s murder

On that note, I turn it over to you: What did you think of Episode 6 of HTGAWM? On a scale of “Sam’s the one wrapped in a rug!” to “Annalise just took off her wig!”, how shocking did you find the Asher-Bonnie tryst? Sound off on those questions and more in the comments!