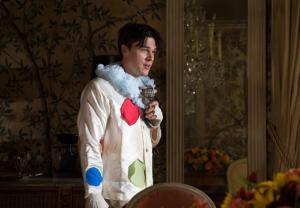 In the conclusion of American Horror Story: Freak Show’s Halloween two-parter, Edward Mordrake continued to audition candidates to join his “coterie of companions” and finally decided that one freak was indeed pure enough to be given a golden ticket to his shadowy netherworld. But, with Ethel already ruled out, would it be Paul the Illustrated Seal? Amazon Eve? Pepper?!? Or the performer you’d have least expected? Read on and find out.

DECISIONS, DECISIONS | One by one, Edward visited each freak and demanded that they regale him with their sob stories. True to batty form, Elsa at first still thought that he was the Svengali that Esmeralda predicted was going to take her to the top. When at last it dawned on her that he was not a talent manager but the legendary bogeyman, she protested, “I’m not one of them”… even as Edward’s minions pulled off her artificial legs.

After becoming a blue movie star for the Watchers, Elsa was drugged and filmed having her legs chainsawed off. “They told me I was one of the lucky ones,” she said, since she survived the snuff film. And ironically – or, since this is Elsa, maybe not – she seemed more bitter about the fact that the movie made her a star as it ended her career than about her grisly double amputation.

Hearing all this, Edward’s spare face decided, “She’s the one.” And she was more than willing to cross over to the other side. She even begged him to take her. But just as he was about to do so, he heard music…

TURN THAT CLOWN UPSIDE DOWN | After running out of gas biking back to camp, Jimmy and Esmeralda just happened to be in the wrong place at the right time to spot Twisty tackling Bonnie during another escape bid. Following them to the clown’s hell on wheels to see if he could help the girl, the lobster boy – d’oh! – wound up getting both himself and the fake clairvoyant captured by Dandy.

When Jimmy and Esmeralda came to, Richie Rich was hosting his own makeshift circus – hence, the music Edward heard – and beginning to saw the “psychic” in half. Lunging at Dandy, Jimmy saved Esmeralda and yelled for the “audience” (Bonnie, Corey, Mike) to run.

In the woods, Esmeralda told the kids to fetch the police while she kept Dandy distracted. And, as much as Jimmy dislikes the cops, they really couldn’t get there too soon. Twisty was just about to stab him when Edward appeared, and forced him to remove his mask and tell his tragic tale.

Back in the day, the simpleton was a popular children’s clown and a real sweetheart. But he never liked the freaks in his carnival – they were cruel, so cruel that they drove him away with molestation accusations. Lost, he returned to Jupiter, where his mother had died, and tried to make a living turning junk into toys. Failing at that – at the very store whose staff he later murdered – he swallowed a rifle and shot himself. Poor thing couldn’t even get that right!

And what about the kidnapped children? Edward asked. “I saved them from the evil, mean freaks,” Twisty explained. And from their parents. And gave them candy. Put on shows for them. He even got them a pretty babysitter! And that was that. So overwhelmed by the goodness of the clown’s intentions was Edward that he announced, “You have caused the demon to weep,” and stabbed him, thus adding him to the collection of souls.

Shortly thereafter, when Dandy returned to the bus, he discovered Twisty’s lifeless body and affixed the clown’s chilling smile to his own face.

WARMING TREND | The morning after, Jimmy lied to the police that he hadn’t gotten a look at Twisty’s killer (even though he had seen Edward) and reminded the detective that somebody still had to pay for Meep’s death. Nearby, Esmeralda told another officer that Jimmy had saved the day.

Back at camp, Jimmy revealed that Edward had claimed his freak and the curfew had been lifted, and Esmeralda thanked him for his heroism with a kiss on the cheek. But, before anyone could heave a sigh of relief, a mob arrived. Elsa assumed that they were coming to run them off. Instead, Mike’s dad shook Jimmy’s hand, and some kind of freak/normals potluck appeared to break out. It was exactly the kind of acceptance Jimmy had always dreamed of! Elsa, too, in a way: The lobster boy’s sudden popularity meant that she could sell out that evening’s show!

Oh, and about that show… the Tattlers assumed that Elsa had rearranged the lineup so that they were warming up for her. But it was even worse than Bette and Dot imagined: “You’re warming up for the pinheads,” the chanteuse gleefully revealed. And, though the performance was SRO, Elsa made an exception for Stanley when he introduced himself as Richard Spencer from Hollywood.

NEW ATTITUDE | Finally, back at the Mott mansion, Dora – decidedly unimpressed with Dandy’s Twisty half mask – reminded him that Halloween was over and told him again that he didn’t scare her, so he could just stop trying. And maybe it was the mask, or maybe it was her crack about her having to wash out his skid marks, but he finally did what we all knew he inevitably would – he slit her throat, then, psycho that he is, lowered his mask and laughed.

OK, your turn. What did you think of the episode? Were you sorry to see Twisty’s story end so soon in the season? Hit the comments!