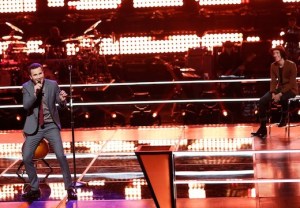 “Whatever happened to FUN?” rages Kristen Johnston’s Lexi Featherston in one of the most shocking (and hilarious) scenes in the history of Sex and the City.

That exact same question popped into my head during tonight’s episode of The Voice, where Gwen Stefani harajuku’d Season 7’s most ebullient contestant in favor of yet another plaintive balladeer complete with sad-puppy expressions and a hipster hat.

OK, so maybe Troy Richie’s vocal on “Hey Ya!” suffered a tiny bit at the expense of his Hammertime side-shuffle and his crowd-baiting callouts. But couldn’t the world of reality singing competitions use a little more irreverence, a little more playfulness? I mean, my iTunes is chock full of “good,” “important” music — but I’m not gonna pretend like Fergie’s “London Bridge” or LMFAO’s “Sexy and I Know It” haven’t managed to crack my Top 100 Most Played list.

What I’m getting at, I guess, is that while Troy’s commitment to goofballery might not have been the smartest strategy for the Knockout Rounds, it’s a shame that, somehow, the Voice coaches place less value on Outkast’s biggest smash than they would on, say, a 30-year-old Whitney Houston ballad or anything by Train. Music is subjective, after all, and the reality competition panorama ought to be wide enough to encompass all those disparate sounds.

OK, enough of my ranting. (It’s been that kind of week on The Voice.) Instead, let’s get to the business of ranking tonight’s Knockouts from least- to most-promising winner (while bearing in mind I’ll be back in an hour or so with more detailed reviews of every performance):

3. Team Adam: Mia Pfirrman (“Human” by Christina Perri) defeats Alessandra Castronova (“Next to Me” by Emeli Sande) | Mia hit some big ole’ glory notes on “Human,” but despite guest mentor Taylor Swift’s push for more vulnerability, I still felt more like Mia was doing “look what I can do, Ma!” moreso than interpreting the song’s core message. (In other words, Tess Boyer’s Season 6 cover was far superior.) Alessandra, for her part, showed greater nuance, but a little less conviction. Faced with a choice of “pick a winner” or “welcome Christina Milian back to the social-media balcony,” I’d have chosen Alessandra as the winner, but this was one of those instances where it’s more a matter of personal taste than obvious “victory.”

2. Team Gwen: Taylor John Williams (“Mad World” by Tears for Fears) defeats Troy Ritchie (“Hey Ya!” by OutKast) | I know some corners of the blogosphere have thrown a side-eye at Taylor John for covering songs closely associated with Kris Allen and Adam Lambert during American Idol‘s eighth season — and I get it. (Especially since Taylor’s renditions have come across like bargain-brand peanut butter to the Idol grads’ Skippy.) My bigger problem, though, is that Taylor is about as distinctive as unfilled pie crust — in terms of tone, emotional connection to the music and stage presence. Troy, for his part, was the key lime of the competition — not for everyone, but with a sting of citrus-y zing and a commitment to playing a bit left-of-center. Add his gorgeously gruff tone and on-point falsetto to the mix, and well, Gwen’s end of episode “I feel like I might’ve just won The Voice”  seems less prescient as “Girl, cutting Troy is where you just LOST The Voice.“

1. Team Pharrell: Elyjuh Rene (“With You” by Chris Brown) defeats Ricky Manning (“Wrecking Ball” by Miley Cyrus) | First, let’s talk Ricky, who’s improvement from Battles (a tepid “Love Me Again”) to Battles (a solid “On Broadway”) to Knockouts (a gut-wrenching Miley cover) has been almost unprecedented. Dude laid himself bare on the Voice stage tonight, and somehow managed to channel T.Swift’s crazy/beautiful advice — use your eyes as “laser beams” and “give bold, hurt, dejected looks and use that as a sniper shot” — to achieve front-runner status. And while, yeah, he outdid Elyjuh tonight, the latter artist really managed to pull off some impressive vocal tricks on the typically underwhelming “With You.” The scatting near the end? That rollercoaster run? His loose, limber stage presence? All pretty compelling. And since Pharrell probably knew Ricky was guaranteed to get a Steal, his explanation about “more work to be done” with Elyjuh didn’t rub me the wrong way.

I just wish we’d had a little more insight into Pharrell’s cryptic comments that there was a “disconnect” between Elyjuh and the lyrics, and that he wants the kid to tell his “own story” and not anyone else’s. Whatever the specifics — put yer theories down in the comments! — it’s clear the coach feels a real responsibility to his teenage charge. And while that approach may not carry him to the Season 7 winner’s circle, it further stamps Pharrell as somebody who could really get involved with Voice graduates after the show — maybe even help ’em score a chart topper or two…

On that convoluted note, it’s your turn. What did you think of Tuesday’s Knockout Rounds? Take our poll below, then sound off in the comments! 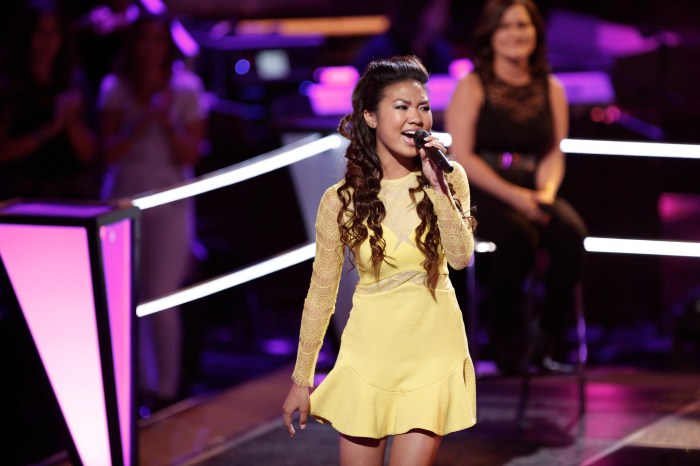