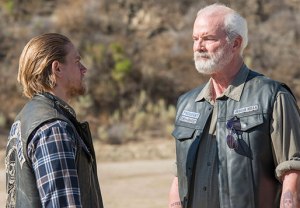 Anyone else starting to see a pattern in these final Sons of Anarchy episodes?

Following Bobby’s unfortunate capture (and loss of an eyeball) in last week’s installment, Tuesday’s hour found Jax & Co. going through very similar motions: Trying and failing to gain the upper hand on an enemy, getting brutally violent when things don’t go according to plan and — after receiving another body part of Bobby’s in a package from Moses Cartwright — silently realizing just how deep this rabbit hole goes.

That said, this week’s episode did manage to throw a few curveballs at us, including two words spoken by an unexpected character that changed the game for Gemma. Let’s review “The Separation of Crows,” shall we?

JURY DUTY | Now that one of SAMCRO’s own is suffering at the hands of August Marks and his crew, Jax (finally?) seems to understand the weight of what he’s been doing the last few weeks. Marks is smarter, stronger and he’s got nothing to lose, Jax tells Chibs. For a moment, Jax wants to back out of the whole ordeal — but Chibs won’t have it. “The Sons of Anarchy have a duty, brother. A mission. And we need our goddamn leader,” the Scot says. And that’s all it takes — well, that and a few good cigarettes — to get Jax back on board with club business.

First on the day’s agenda: Finding Bobby. Unfortunately for SAMCRO, Tyler informs them that Marks wants Pastor Haddem’s body, as well as the whereabouts of Haddem’s wife and stepson — and for every 24 hours that SAMCRO doesn’t talk, Bobby gets another vital body part removed. Yikes. But when Tyler’s crew comes up dry on Bobby’s location, the club decides to shift its focus to finding the rat who sold them out to Lin.

With some help from Sergio Coletti, the club tracks down Renee O’Leary (and her pitiful husband Carl), looking for intel on her now-deceased son, Gib. Renee confirms that Jury was Gib’s real father, who took it upon himself to get rid of Gib’s body after finding his son dead. It’s not long before the club realizes Jury must have been the rat, considering he was the only other person who hit Lin’s gun delivery and knew where SAMCRO was storing the stolen guns. In other words? Road trip!

Under the guise of discussing the Triad, Jax and the boys meet with Jury in the middle of nowhere. But even after Jax admits to killing Gib, Jury insists he didn’t say anything to Lin’s crew: “I wanted you dead, Jackson. But I’m no rat. I didn’t tell Lin s—t.” Jax’s response? “I don’t believe that.” And that’s where things get ugly. When Jury tells Jax the harsh truth about who he’s become — “You had the chance to be something good for this club. Something your old man always wanted. But you turned into everything he hated. You became the poison” — Jax turns on his Indian Hills comrade. The more Jury talks about John Teller’s death, the angrier Jax gets… until finally, he knocks Jury to the ground and shoots him dead, before Jury can get a grip on his own gun. (And with that, we add another name to this season’s body count.)

THE ACCIDENTAL TRUTH | After Gemma helps Leticia get clean at SAMCRO’s cabin, she’s called to Abel’s school, where he’s been sent home early again for knocking a bully in the head with a metal lunchbox. (Apparently, Gemma wasn’t as freaked out by Abel wielding a hammer a few weeks back as I was.) When Abel’s teacher tries to talk to Gemma about the aggression Abel’s been imitating, Gemma inevitably takes the criticism poorly. But later, while Abel colors at the kitchen table, Gemma tries to get her grandson to explain why he injured his classmate. And after Abel insists it was an “accident” — a label he recently overheard Gemma using to justify Tara’s murder — this incredible exchange happens:

Gemma: Do you understand what an accident is?
Abel: Do you?

Gauntlet. Thrown. Of all the questions Abel has asked this season, this one is by far the most compelling. Well done, Ryder Londo, for an impeccable line reading. 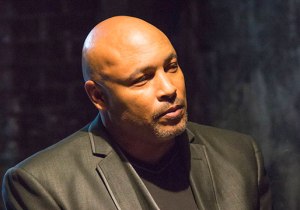 Aside from Gemma’s uncomfortable convo with her grandson, Mama Teller encounters another shock: SAMCRO’s latest enemies have snuck into Gemma’s house, murdered her beloved birds and written an ominous message — “No son is safe” — on Abel’s bedroom wall. Realizing that his own kids are now in harm’s way, Jax agrees to compromise with Moses Cartwright by delivering the pastor’s body but refusing to give up Leticia and Grant. And even though Jax’s intentions are good, his offer doesn’t go over so well with Marks’ men: Moses pays Bobby a visit in his holding cell and, with the help of his team, cuts off the fingers on Bobby’s left hand, which SAMCRO receives in another horrifying package. When will it end?!

Also in the hour:

* Juice proposes a deal to Jarry and Unser, promising he’ll reveal the names of who killed Tara and Eli, so long as Juice goes to Ad Seg — administrative segregation, for those like me who need to brush up on their prison slang — when he’s moved to Stockton in a few days. (It remains to be seen if Juice will reveal the real identity of Tara’s killer, considering the first name he offered to Jarry was one of Lin’s men.) And although Jarry comes around to the idea, Unser knows something’s fishy and quickly pieces together SAMCRO’s long-term plan to kill Lin via Juice.

* In a sweet Nero/Wendy moment — which we need way more of — Nero tells Wendy about his plans to sell Diosa and move to his uncle’s farm as soon as everything is square in Stockton. He asks her to come with him, along with Gemma and the boys, but Wendy can’t believe that Abel and Thomas would ever be allowed to leave Charming.

* And, if you’re looking for some pointless trivia, IMDb has confirmed for me that Dale Dickey, who plays Renee O’Leary in this week’s episode, also played the ATM-wielding meth addict in Breaking Bad‘s early years. The more you know!

So, what did you think of the episode? Hit the comments and tell us!