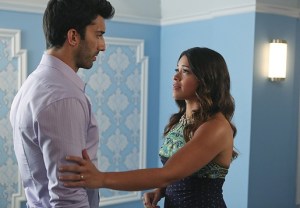 Is Jane a virgin no more?

On Monday’s episode of the CW series, the titular heroine has an epiphany: she’s unmarried and pregnant — her worst fear come true — so why wait to have sex, especially when she’s found the guy she plans to spend the rest of her life with?

Needless to say, her fiancé Michael is into the idea, and the big night is scheduled for at the hotel’s presidential suite (a gift from Petra). “Are you nervous?” he asks Jane in the next scene. “It’ll be quick, I promise. In and out.”

“Will you come with me?” she replies.

As you might have guessed by now, they aren’t talking about sex, but her witness statement about Zazo’s death. It’s the first of many clever moments playing on the elephant in the room. Another finds the following prerecorded hotel video message, delivered by Rafael, interrupting Jane and Michael’s steamy work-up to the main event: “Thank you for coming. If it’s your first time, we hope it’s an experience you never forget. Let us fulfill your every need. I’m Rafael Solano, and your pleasure is my pleasure.”

But before Jane and Michael even make it to the suite, she sees him with Petra outside the crime scene. When she confronts him about the encounter, he dismisses her because she’s “like hormonal.” Dude, you are so not getting laid now. Jane decides to sneak into Petra’s room to find out what the pill was that she spotted her taking earlier. They were Xanax, Petra explains when she catches Jane. Then she wins Jane over – and bring her to tears! – by showing her the baby’s nursery.

With that fight resolved, the big night is back on – after church, of course. Sitting between her mother and Abuela at mass, Jane starts to imagine that the priest is talking directly to her about her lie of omission to her grandmother. Then the choir comically breaks into song about her plans for the evening until Jane finally blurts out, “I’m going to have sex with Michael tonight!” Xo’s response is much happier than Abuela’s: “Hallelujah!”

She’s not seeking anyone’s approval, Jane informs her family before heading off to do the deed. Things start out well enough – they’re in a romantic suite, Michael is caring – but that hotel video only reminds Jane of her growing feelings for Rafael. Plus, Louisa – desperate not to get caught by her dad while having an affair with his new wife/her ex – pulls a fire alarm. Taking in the signs, Jane and Michael decide not to consummate their relationship, but instead move up their wedding – to next week! 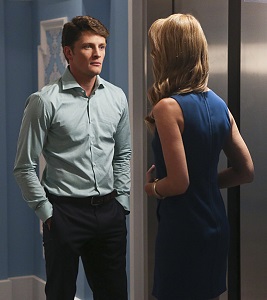 * Those growing feelings for Rafael? I would be having them, too, if I shared a dance like the one Raf and Jane do. These two also seem to connect on another level. When Jane comments on his actions, inspiring him to do what’s right, and warns that he may end up with a judge-y kid, Raf sweetly replies that he hopes that’s true.

* Michael discovers Petra’s alibi is a lie. She was actually in a stairwell before Zazo’s murder, but she can’t say why. Theories?

* Rafael starts to put two and two together when Petra refers to Zazo’s brother by name, revealing just how close the two of them were.

* Abuela somehow gets on the lot where Rogelio’s telenovela films – hello, security?! – to tell him to stay away from Jane, but ends up getting swept away by him. Stand strong, Abuela!

Jane the Virgin fans, what did you think of the episode? Should Jane and Michael just do it? Or are you rooting for her and Rafael? (Prepare to become even more torn after next week’s episode.)