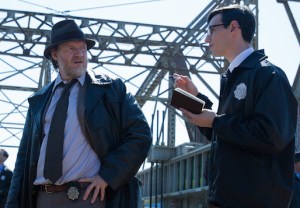 This week’s episode of Fox’s Gotham should spark fresh discussion about what on the freshman drama is working, and what is not — if only because of the markedly different character mix that was on display.

I, for one, was quite compelled by “Spirit of the Goat,” so I am left to wonder: Is that in part because Fish Mooney and the lumbering “crime syndicate” storyline was 100 percent absent?

Or was it because of the significant bit of character work we got this week with Detective Harvey Bullock? Donal Logue is an immensely watchable actor, but the fact is that over Gotham‘s first five episodes, he’s been given little to do beyond the gruff, scraggly yin to Jim Gordon’s yang. (And even in that respect, they’ve written him with a variety of tonalities — sometimes thuggish, sometimes flip.) But here via flashback, we got to see Bullock work alongside a previous partner, Detective “Cher Horowitz’s Dad” Dix, a dynamic in which Harvey was the first one to storm a crime scene, against his colleague’s wishes. (Sound familiar?) And as the “Goat” killer was somehow resurrected after a decade-long dormancy, we saw Harvey’s anguish, wondering how he could possibly catch this guy again.

The Case of the Week itself was perhaps the best we’ve had thus far, palpably dark/despicable, sufficiently vexing (for us and for Harvey) and packing a nifty twist at the end. (Then again, no one casts Susan Misner just for a walk-on.)

The Oswald Cobblepot arc, the second-biggest throughline of this season thus far, churned independently of the Case of the Week, shedding a bit of light on his relationship with mom Carol Kane but more critically confirming for us how he, in his mind, fancies Jim Gordon a “friend” — even if Mom is no fan of the cops. And what better way for Oswald to demonstrate that friendship than by “returning from the dead” at episode’s end, just as Jim is being arrested for Cobblepot’s mob-ordered murder. But man oh man, Harvey is not happy to see that he’d been hoodwinked. Bad time for the Gotham logo to swoop in!

Beyond all of the above, there was a random yet entertaining bit with Edward Nygma’s crush on records-keeper Kristen Kringle (and his self-defeating attempts to demonstrate his affection); a brief cutaway to Bruce Wayne, only so that he could opine on the Goat’s methodology of killing the 1 percent’s first-born children; and the requisite silent dollop of Selina Kyle. (Do we know what exactly she pinched from the Waynes’ desk?)

What did you think of “Spirit of the Goat,” and where do you rank it amongst the first six episodes? Do you, as I do, wonder if it highlighted a Fish Mooney problem? Or do we simply enjoy a little variety in the weekly mix of characters?