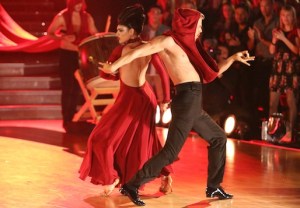 Things got downright spooky on Week 7 of Dancing With the Stars, as the final eight couples performed both individual and team dances. It was a freestyle fright night of sorts — starring TeamCreepy versus TeamItsyBitsy — and we faced the prospect of Michael Waltrip and Tommy Chong surviving yet another week. Now that’s what I call scary!

That said, popping back to the ballroom to say “boo” on this Halloween-themed live show were returning head judge Len Goodman (who else has missed the prospect of a “10 from Len” during his latest hiatus?) and co-host Erin Andrews (back from World Series duty on Fox), plus spine-tingling performances by breakout artist Ella Henderson (“Ghost”) and the ever-fabulous Nikki Yanofsky (“Necessary Evil”).

DANCE OF THE NIGHT | Bethany Mota and pro Derek Hough: In her wildly dramatic, drum-infused lady-in-red Paso Doble, Bethany rocked a Maleficent-style (is that what it was?) horned coif you had to see to believe. But her intensity and fleet feet grabbed the most attention. Bruno loved it, calling the duo “the embodiment of the flames of passion … absolutely fantastic!” Len called it a “spectacular number” but grumped about wanting to see more Paso Doble and less over-the-top theatricality. Julianne disagreed, saying the Halloween theme didn’t detract from the dance at all, and noted Bethany really “nailed it.” There was no “10 from Len” (he held out with a ‘9’), but the dance earned a trio of perfect paddles from the other judges.

RUNNER-UP FOR DANCE OF THE NIGHT | TeamItsyBitsy (Bethany & Derek, Janel & Val, Lea & Artem, Michael & Emma): This spectacularly synced freestyle dance may have ended with everyone stuck in a gigantic spider web, but it was anything but sticky. Len enthused that it was a “great routine and you danced it beautifully,” while Carrie Ann offered up some special praise for Michael, who “didn’t make anybody look bad.” That string of 9s from the judges didn’t look bad, either. 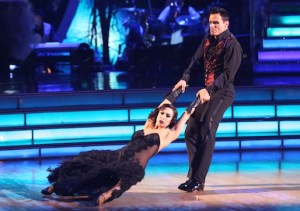 MOST CRIMINALLY UNDERSCORED | Antonio Sabato, Jr. and pro Cheryl Burke: Though this spooky Viennese Waltz was aimed at casting a spell on Len, Antonio’s sexy but stilted performance fizzled with the judges, and especially Carrie Ann (“I don’t think the spell worked”), who doled out a dismal ‘6’ and said he was uncomfortable to watch. A trio of unenthusiastic 7s was more expected, but what’s up with that, Carrie Ann?

WORST OF THE NIGHT | Michael Waltrip and pro Emma Slater: This country-themed, cringe-worthy jive generated the scariest comments of the night. Len declared Michael was “running on empty” by even making it to week 7, while Julianne used an apt Halloween-inspired description, simply calling it a “nightmare.” Bruno even wondered if Michael would make the DWTS history books: “I think you’ve broken the records actually of being off-time.” Carrie Ann simply called it “sad” and unsurprisingly, so were the scores, which included across the board 5s from the judges.

And now, the results…

“I was able to dance with one of the best dancers in the world … it’s all about the fans, and that’s why I’m here,” said a gracious and shirtless Antonio of his experience — and the opportunity to dance with Cheryl, who added, “It’s so sad for me to say goodbye.” We couldn’t agree more, girlfriend!