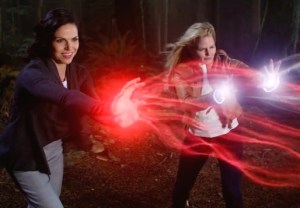 This Sunday on ABC’s Once Upon a Time, Emma and Regina briefly set aside their personal cold war in order to wage battle against the Snow Queen, while a flashback to Emma’s childhood set the stage for a curious revelation.

DURING EMMA’S CHILDHOOD CIRCA 1998…. | Young foster system vet Emma is caught pickpocketing Pop-Tarts, but a new pal named Lily (played by Nicole Munoz aka Defiance‘s Christie Tarr) covers for her. After splurging on some snacks (using Lily’s pinched credit card) and eluding a strange man, the two bust into a vacant home, where Emma shares how after seeing her younger friend Cecelia get adopted by a “perfect” couple, she realized that she was too old for such a fate. So there was no point in staying in the system. Lily draws on Emma’s wrist a “star” to match her own, the gals play with a video camera, and then Lily pleads that they remain friends forever — though the foundation of their shared “foster kid” bond is shattered when the strange man — Lily’s father — shows up looking for the runaway, saying he and her mother are worried sick. A stunned, saddened Emma remarks, “You have a family?!”

IN STORYBROOKE…. | Rifling through files, Emma spies an old photo of her arguing with ice cream parlor proprietor “Sarah Fisher” aka the Snow Queen — yet she has zero memory of the encounter or having ever met the woman. Emma decided to pick Regina’s brain, educating Elsa along the way about her prickly history with the Evil Queen. Leaving Elsa in the Bug, Emma talks to Regina, then asks if she might need her “extra juice” to defrost Marian, but Regina scoffs at the offering of magic: “One thing is abundantly clear — you’ve never had my back and you never will.” After Emma leaves, Sidney reports to his keeper that he has found the Snow Queen’s lair, but in trade wants release from the mirror; Regina prefers to first see if his intel pans out. Using Sidney, inside her compact, for guidance, Regina sets out to find the Snow Queen, and soon enough bumps into Emma in the woods. Seems Elsa has gone missing, having chased after what appeared to be her sister Anna. (Instead, Elsa realizes, it was a trap set by the Snow Queen, who promptly chains up her rival. Snow Queen chastises Elsa for “squandering” her powers, and marvels at how much she could accomplish if she learned to control them. But for right now, she just needs Elsa out of her way.)

While making their own tracks for the Snow Queen, Regina admonishes Emma for “trying to win me over, so I can assuage your guilt” about the Marian thing. “But I won’t. Intentional or not… you ruined my life, and there’s no coming back from that.” The two traverse an ice bridge created by Elsa but get caught midway across, and as Emma discovers that Regina was using trapped Sidney as her guide, Regina herself realizes that Sidney ratted her out her to the Snow Queen. After barely escaping the crumbling bridge, the ladies face off against — and use their combined magic to destroy — an ice warrior conjured by the Snow Queen. Snow Queen pulls a Darth Vader-like choke hold on the frenemies, until Elsa arrives to break things up. But the Snow Queen nonetheless leaves with what she truly was after, Regina’s compact.

Afterward, Elsa urges Emma and Regina to mend their differences, else Storybrooke stands no chance. Regina holds firm that she “never will, for one simple reason — I don’t want to,” but Emma later shows up at the vault to explain in detail how, because no one truly can understand either of them, she always thought that maybe they could be friends. That’s all she wants, not to be assuaged of guilt.

Meanwhile, inside her icy lair, the Snow Queen releases Sidney and sets him truly free, for all she wanted was the mirror itself, imbued as it is with much of Regina’s dark magic. Taking a shard from it to complete and “heal” a larger, cracked mirror, the Snow Queen declares, “Soon, I will have what I want — a family that loves me.” (Which is kinda snoozeville as far as supervillian endgames go, but we’ll wait and see.)

Elsewhere, Mary Margaret leaves the baby with Belle as she and David embark on a “date night” stroll, only to get detoured by the discovery that Will Scarlett broke out of jail. Mary Margaret finds the thief digging to find his buried traveling sack (inside which is his map on where to dig — long story). Mary Margaret deduces that David let Will go free so that she could enjoy a life-affirming “adventure,” but once back home, David reveals that was not the case, but hey, if it got her Bandit Snow juices flowing, win-win!

At hour’s end, Hook finds Emma in her office about to go through her box of past knickknacks — a pic of her and Neal included. [Sad trombone] Emma finds the camcorder that she and Lily goofed around with, and cues it up. But once their few seconds of girly goofiness ends, Emma sees that there is also a recording from a foster home, where she and other kids are being looked after by… a mild-mannered Sarah Fisher aka Snow Queen. Expected? Kinda. But still a curiosity? Yep.

NOTABLE QUOTABLES | “Unfortunately, I’m a little busy trying to save my true love’s wife, or haven’t you heard?”…. “If we fall through a portal to Asgard….”…. “There are many enchantments you have yet to be exposed to; if you bothered to study your craft you’d know that.” “There’s not a lot of online classes on that sort of thing”…. “In your mug shot you looked taller. And smarter.”

What did you think of the episode “Breaking Glass” and the much-touted Regina/Emma deep-dive?