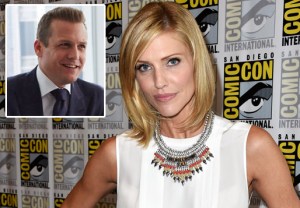 The Battlestar Galactica alum is set to guest-star on USA Network’s legal hit as an adversary to Mike and Harvey (and possibly more for the latter), TVLine has learned exclusively.

Helfer will play Evan Smith, Mike and Harvey’s opposing counsel in a huge class action case. Although the two sides exchange blows, Harvey’s first instinct may be to exchange numbers with her.

The episode will air during the second half of the show’s fourth season, which is slated to kick off in early 2015.

Helfer will next be seen in the Syfy limited series Ascension.