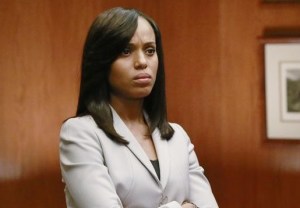 ABC’s Scandal this Thursday threw Jake into the bowels of the Pentagon, because apparently he is so obsessed with Olivia that he had First Son Jerry Jr. killed to win Fitz the election, so that… well, that’s where the logic gets a bit fuzzy.

And yet, the leader of the free world bought into the lie — told by Rowan, mind you — and hounded Cyrus for updates on Ballard’s interrogation every four hours. Ultimately, Fitz would visit Jake in the bunker himself, to at first make small talk (leading me for a moment to think, with great relief, that they were in on some massive ruse), but then solicit a confession, which wasn’t about to happen. And at hour’s end, Fitz paid a return visit, thinking that a few jabs learned on the Yale University Boxing Team would make the B613 vet ‘fess up, but Jake gave as good as he got, taunting POTUS with tales of his and Olivia’s seaside carnal cavalcade.

During Fitz’s first super-secret trip to the bunker, Mellie wondered why he skipped out on their daily visit with dead Jerry, and accused him of being off screwing his mistress. Fitz snaps and reveals that he was interrogating their son’s murderer. Mellie’s reaction is bizarre, even for Screw It All to Hell Mellie, as she posits that Jerry Jr. “was like our war hero, our solider…. He died for us,” to stay in the White House four more years. Rightly recoiling at her spin, Fitz says they will share no more words until the Mellie he recognizes returns — and at episode’s end, we see the First Lady lose the Uggs and grab a needed shower.

Now if you, as I tweeted, were wondering exactly what Jake’s possible motive for ordering a hit on Jerry Jr. (as well as Harrison) could be, Rowan tried to spell it out for us/Olivia, as outlined above — that while he in the past assigned Jake to execute many a sordid task, this was not one of them, that this instead was the handiwork of an obsessed man. The only saving grace amidst this motive-less madness is that when Olivia confided in Abby the shocking suspicions about Jake killing Harrison and Jerry, Liv herself admitted she wasn’t quite buying it. So there’s that.

Elsewhere in the hour….

* The cold open catapulted us back into the Catherine Winslow case, with Quinn and Olivia (bored because Jake seems to be blowing her off) monitoring the head of security for Catherine’s husband’s law firm. In doing so, they witness this Kubiak guy kill the dead girl’s BFF, Faith. Olivia gets bupkus in grilling Jeremy himself, but Quinn gleans from her own snooping that Faith had gotten from Caitlin a key to a locker, and that’s what Kubiak was after. Quinn also deduces that Faith swallowed said key, and subsequently extracts it from her body at the morgue (though based on my decades of watching TV medical/crime dramas, that seems like something that would have been discovered in the original autopsy).  How this might connect to a larger story, I invite you to speculate!

* Huck conducted several (Clumsy) stakeouts of baby mama Kim’s place, and gets busted twice. When he asks to see Javi, Kim invites him to come back that night — and Huck somehow doesn’t smell this for being the trap that it is. But instead of having police awaiting him (a la Graceland), Kim tries to spring a shrink on Huck. Yeah, he’s having none of that.

* And lastly, David drunk-dialed Abby a time or two, then eventually showed up in person to confess that he, in essence, killed that kindly judge from a couple weeks back, using the B613 files. But Abs doesn’t quite know what to do with that info.

What did you think of “The Key”?