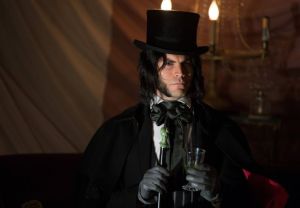 In this week’s kickoff of American Horror Story: Freak Show’s Halloween two-parter, most of the superstitious carnies refused to perform on October 31, for fear that doing so would conjure up Edward Mordrake (Wes Bentley), a two-faced bogeyman who, based on his description, you’d think would fit right in.

At the same time, a potentially even more terrifying situation was developing: With the arrival of faux fortuneteller Maggie Esmeralda (Emma Roberts), Dot suddenly had competition for Jimmy’s attention.

SHE’S GOT (CRYSTAL) BALLS | When first we met Maggie and her partner in crime, Stanley (Denis O’Hare), they were passing themselves off as scholars trying to sell a “baby Sasquatch” to the American Morbidity Museum. Though they failed, a curator type suggested they not give up but return with something authentic… perhaps from one of the few remaining freak shows… maybe the one in Florida, for instance.

Certainly, by the time “Miss Esmeralda” arrived with her Veronica Lake curls, Jimmy was in dire need of some distraction: Dot had just gotten their fellow freaks to stop partying long enough to notice the lobster boy’s angst and hold a proper funeral for Meep (chicken heads and all). Though Elsa was skeptical of the fake clairvoyant at first, the grifter picked up enough clues from around the chanteuse’s tent to win her over by suggesting that she’d not only eventually eclipse her nemesis, Marlene Dietrich, she’d also have a tall, dark and handsome Svengali by her side.

Meanwhile, Dot, her ego growing by leaps and bounds, revealed to Bette that her dream about them splitting up wasn’t one of the pipe variety: The rising star would do whatever it took to get the separation operation – no matter which of them lived and which died. (Yikes!) And as soon as she got a gander at Esmeralda, Dot knew she was looking at trouble. Esmeralda attempted to be (psychic) friendly, offering a free reading. But in return, Dot spat, “I’m sure that’s not the only thing you give away for free.”

All the while, Stanley was, ahem, holed up in a hotel room with a hottie (un)dressed as Thor. When his sidekick phoned, the con man seemed to care very little about Maggie’s case of the heebie jeebies and a whole lot about the fact that she’d stumbled upon a jackpot in the form of conjoined twins. After he hung up, we discovered that his lover’s abs weren’t the most noteworthy attribute on display in the room: One look at Stanley’s junk, and all the himbo could say was “Holy Christ.” (Perhaps the boot schlong hinted at in the opening credits?)

LAST CALL | Upon learning that she has cirrhosis of the liver – and less than a year to live – Ethel hit the bottle anew, pushed away Jimmy and (not in a cause-and-effect way, mind you) relayed to the Tattler sisters the legend of Edward Mordrake, an aristocrat driven mad by the devilish murmuring of the second face on the back of his head. How mad was he driven? So mad that he murdered all of the freaks in his freak show before committing suicide himself. Ever since, if a freak performs on Halloween, Mordrake’s spirit is summoned and lingers until he chooses one of the troupe to join his coterie of companions. (This, the bearded lady swore she knew firsthand.)

Later, Ethel chose the unfortunate moment after Dell found himself unable to “perform” for Desiree (for the umpteenth time, it seemed) to reveal to him that she’s dying and ask him to offer Jimmy some parental guidance in life without ever disclosing that he’s the lobster boy’s father. Shockingly, it was a pretty sweet scene, with the strong man showing what for him passes for a sensitive side.

CLOWN AND OUT | In town, while Twisty was out spooking trick-or-treaters, Dandy pitched a fit when his mother gave him a Howdy Doody costume to wear for Halloween, then threatened an unimpressed Dora the Maid, who boldly dared the psycho to kill her. When the two clowns eventually reunited at the end of the episode, the former had abducted a new kid, Mike, to lock up with Corey and Bonnie, and the latter appeared to be growing bored with just poking at their kidnapping victims.

MAN IN BLACK | Back at the freak show, Dot was hell-bent on rehearsing whether or not doing so brought forth Edward Mordrake. She even tried to pull rank on Elsa, who also wanted to practice so that she’d be ready when her mentor showed up. (Like anyone pulls rank on Elsa! As if!) Anyway, the diva was scarcely through a line of Lana Del Rey’s “Gods and Monsters” when her vocalizing did, in fact, cause Mordrake to materialize. And, bless her batty heart, Elsa seemed to think that he was the manager Esmeralda had predicted would usher her onto the world stage.

Instead of offer the Fraulein career counseling, however, Mordrake paid a surprise visit to Ethel and, in considering her a possible addition to his collection, insisted upon hearing first the tale of how she went from vaudeville star to sideshow attraction – short version: Dell – then the details of her deeper pain: Her ex had sold tickets to Jimmy’s birth and even charged two bits to hold the monster baby. Finally, Mordrake offered her a handkerchief to dry her tears, but his evil face declared her “not the one.” So who is? Hmm…

OK, your turn. What did you think of the episode? Did Mordrake give you chills? Or did he pale in comparison to Twisty? Hit the comments!