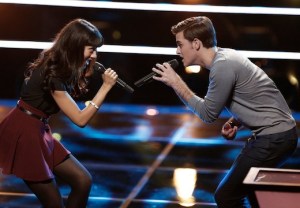 Heaven help me, I’ve taken to using lyrics from the Broadway musical Chicago in my recap headlines for The Voice. (Sample comment from my husband, reading over my shoulder, “I don’t get that reference. At all.” #GayCardRevoked)

But I swear, there’s good reason for my flight of fancy. After all, Season 7’s Blind Auditions yielded exactly one promising jazz vocalist — and yet after a Battle Rounds process that whittled the field from 48 down to 32 contestants, that chica is as extinct as the dodo , as defunct as the Walkman in your “shame-shame closet,” as mopped up as the half a bowl of Great Grains I spilled on the kitchen counter this morning.

No, I’m not shaking my fist at the sky over spilled milk and oats, but rather, I’m wondering how come Gwen Stefani didn’t use her final Steal on the sublime Brittany Butler?

I know, I know… I oughta realize by now that The Voice‘s Steals are sometimes used with the capriciousness of a Kardashian’s Twitter stream, and yet, it still stings to see someone with true Top 10 potential get swept into the dustpan like so many soggy raisins.

Also frustrating? Mark Burnett & Co.’s insistence on condensing a handful of Battles every season into blink-and-you-missed-’em montages. You cannot tell me there isn’t extra room in those bloated, two-hour Monday-night shows to give us a little more sense of how these overlooked head-to-head matchups played out. And if you try to, I’ll stick my fingers in my ears and caterwaul the chorus to “All That Jazz.” Don’t say I didn’t warn you.

On that note, let’s get to the business of ranking tonight’s Battles in order from least- to most-promising winner.:

3. Team Adam: Mia Pfirrman defeats Beth Spangler on Christina Aguilera’s “I Turn to You” (Beth stolen by Gwen) | I recently started taking cardio kickboxing, but you’re not gonna see me throw a punch at Mike Tyson anytime soon. Alas, Mia and Beth trying to scale Mt. Xtina with their B/B- instruments was equally ridiculous. The range-y runs of the saccharine ballad exposed weaknesses in Beth’s technique — to my ears, the entire first verse was just a hair off pitch — while Mia failed to really infuse the tune with the kind of over-the-top passion needed to make lyrics like “For the strength to be strong/ For the will to carry on” sound convincing. Mia rightfully claimed the crown, I suppose, but I’m doubtful either one of these ladies has enough diva potential to make a Tessane-style run at the Season 7 title.

2. Team Blake: Reagan James defeats Kensington Moore on Lorde’s “Team” | Kensington — who missed a key rehearsal due to a kidney stone (talk about a failed attempt at trumped-up drama by the producers!) — showed more power but less personality in interpreting Lorde’s recent radio hit. Reagan, meanwhile, commanded the stage like a seasoned pro (as Adam noted, she came across like she had two decades of experience), and showcased a quirky-pretty tone that could make her a quiet force for Team Blake.

1. Team Pharrell: Ricky Manning defeats Brittany Butler on George Benson’s “On Broadway” | I’ll admit that based on their auditions, I expected Brittany to tear Ricky out of the competition and toss him in the recycling bin, as if he were a used page from an old notebook. But the college dropout showed huge improvement — with a limber vocal that contained both grit and soul. Still, despite his steps forwar, I ranked Ricky a few paces behind Brittany, whose full-on jazz stylings on both verse and chorus were not only perfectly executed, but tastefully restrained. Then again, how often does tasteful restraint get rewarded in a reality singing competition setting?

I repeat: Montages…they’re the WORST!

On that note, it’s your turn. What did you think of Tuesday’s Battle Rounds? Take our poll below, then sound off in the comments!